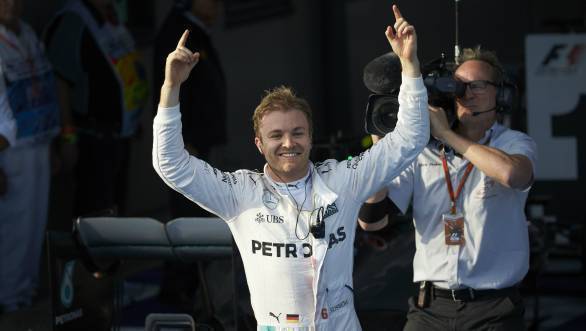 It wasn't the result that people were expecting, but then again, the 2016 season-opener really wasn't the sort of race that people were expecting either. After the qualifying fiasco, which produced pretty standard results, we expected that the race itself would be pretty standard. However, that isn't what happened. And if the rest of 2016 turns out the way this race at Australia did, then we might be in for a pretty great season of Formula 1.

Of course, it all began, as it usually does, when the lights went out at the Australian GP. Even though it was Lewis Hamilton on pole, the man who got a jump on the rest of the grid at race start was Sebastian Vettel. Following his team-mate to the front of the pack was the other Ferrari of Kimi Raikkonen. And Nico Rosberg managed to muscle past Hamilton, with some contact too, taking third spot. All of this meant that Hamilton was down in sixth place by the time that the first lap was done.

Sitting pretty in fourth place was Toro Rosso driver Max Verstappen, while Felipe Massa was fifth in the Williams. However, by the fourth lap of the race, Hamilton was on the move, soon moving up into fifth himself.

Up ahead of the order, though, four-time world champion Sebastian Vettel was pulling away at the head. Raikkonen would manage to stay ahead of Rosberg during the first stint, eventually getting passed by the Mercedes driver during the first round of pitstops.

The terrible twist in all of this occurred on the 18th lap of the race. When McLaren's Fernando Alonso made contact with Esteban Gutierrez's Haas, it launched the Spaniard's car into the wall, which then flipped over, debris flying everywhere, before it finally came to a rest against the barrier. In what is a testament to modern day Formula 1's safety cell technology Alonso walked away from the accident unscathed, climbing out of the cockpit as soon as he could. He would later say that he wanted to make sure that his mother who was watching him on television would know that he was okay.

The race was then red flagged in order for marshals to be able to clear the debris that was strewn all over the racetrack. The order for the restart was Vettel, Rosberg and Raikkonen at the front. Lewis, meanwhile, would be seventh at the restart, which was to take place behind the Safety Car.

Of course, given that the period during which time the track was being cleared meant that the drivers could dive into the pits, there was a slew of tyre changes. And it was this that would be the game changer for Ferrari. They opted to fit Seb Vettel's car with super-soft rubber, which meant that he'd most certainly need another stop before the end of the race. Rosberg gained advantage at this point. Mercedes opted to give their German driver medium tyres. Which meant that when the race restarted, Vettel would pull away initially. But he wasn't able to gain as much of a lead as was needed for him to dive into the pits and come back out ahead of Rosberg. This meant that Rosberg took over the lead of the race.

Meanwhile Hamilton was the man on the move, despite the fact that he'd been stuck behind Max Verstappen in the initial stages. When Verstappen had a terrible pitstop, and when Raikkonen's Ferrari burst into flames, Hamilton was able to move up the order. Eventually making it to second spot behind his team-mate. Vettel then had to settle for third, even though he did try hard to retake second place.

Fourth place would go to Daniel Ricciardo, while Felipe Massa would end the race fifth.

The best performance, however, was undoubtedly that of Haas F1's Romain Grosjean who managed to make it all the way to sixth place on his very first race. This meant that Haas scored points on their race debut, making them the first team to do so in fourteen long years.

Nico Hulkenberg took seventh place for Force India, Valtteri Bottas put the second of the Williams in eighth place, while Carlos Sainz and Verstappen rounded off the top 10 for Toro Rosso.