It was a rather dramatic end to the qualifying session of the Japanese Grand Prix, when, with just over 30 seconds left in the session, Daniil Kvyat had a massive shunt causing the session to be red-flagged. 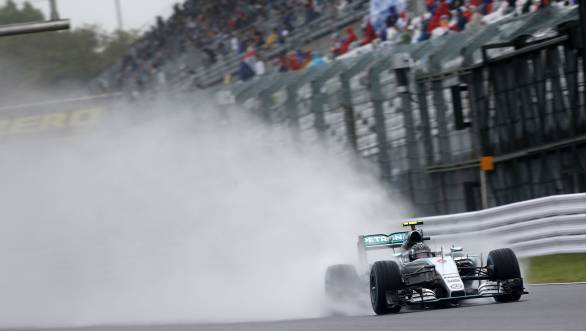 And it was this red flag that probably saved Nico Rosberg's time, preserving it at the head of the order. Lewis Hamilton, who looked set to better his time and make his own bid for pole, had to be content with second on the grid. Rosberg's timing of 1min 32.584sec ensured him his second pole position of 2015.

Third spot on the grid went to Williams driver Valtteri Bottas, who managed to get the jump on Singapore GP race winner Sebastian Vettel. And while during the first two sessions it looked like Kimi Raikkonen was the driver who would be a serious threat to the Mercedes duo, he was bested by the Willams drivers and his Ferrari team-mate in Q3. Raikkonen had to settle for sixth on track, behind Felipe Massa.

Red Bull's Daniel Ricciardo qualified seventh on track, with Romain Grosjean eighth for Lotus, and Sergio Perez ninth for Sahara Force India. Daniil Kvyat, after his massive shunt, having got two wheels on the painted grass at the right before the hairpin resulting in a grizzly crash, could only finish 10th.

Nico Hulkenberg put the second Force India eleventh, with Carlos Sainz Jr twelfth in the first of the Toro Rossos. Pastor Maldonado was thirteenth for Lotus, while Fernando Alonso managed fourteenth for the McLaren team. Max Verstappen will start tomorrow's race 15th on the grid.

The last five drivers on the grid for tomorrow's Japanese GP are Jenson Button, Marcus Ericsson, Felipe Nasr, Will Stevens and Alexander Rossi.