It was a good day for British F1 fans at Silverstone, for, at what is often considered the very home of Formula 1, Lewis Hamilton managed to take a fine pole position in front of his countrymen. Lining up second, alongside the Mercedes AMG F1 driver, is his team-mate Nico Rosberg. Hamilton clocked a time of 1min 32.248sec, one-tenth of a second ahead of Rosberg, allowing him to start the British GP on pole. This also gave the championship leader his eighth pole position in nine races. 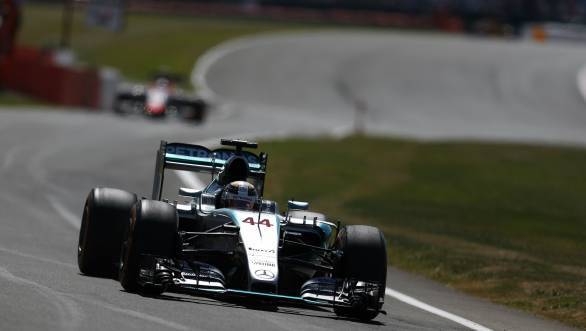 Third place on the grid was Felipe Massa, who gave Williams its best qualifying performance all season long. Of course, there was no real threat to the Mercedes duo though, with Massa eight-tenths off the pace of pole man, Hamilton. More celebration for the Williams camp came due to the fact that Massa's team-mate Valtteri Bottas managed to take the second Williams to fourth place on the grid.

Locking out the third row of the grid were the two Ferraris of Kimi Raikkonen and Sebastian Vettel. The scarlet squadron is followed by the best of the Red Bulls, with Daniil Kvyat lining up seventh on the grid. For Kvyat's team-mate Daniel Ricciardo, it is a tenth-place starting position at the British GP, after his best time was deleted for exceeding track limits at Copse Corner.

McLaren's woes continue at their home race, with Fernando Alonso qualifying 17th, one place ahead of his team-mate Jenson Button. The only two drivers who line up behind the two McLarens are the Manor GP men - Will Stevens and Roberto Merhi.