The 2015 season of Formula 1 could well be another season of Mercedes domination. The performance of the Silver Arrows in testing indicated they'd be strong this year and their performance during qualifying at the Australian GP is another indicator of just how strong the team is likely to be in 2015. Lewis Hamilton took pole position at Melbourne, followed home in a close second position by Nico Rosberg with the team locking out the front row. It wasn't an easy run for Rosberg in Q3 though, and errors meant that he was not able to take the challenge to Hamilton for pole. Lewis clocked a timing of 1min 26.327sec, six tenths ahead of Rosberg.

Williams driver Felipe Massa clocked the third fastest time, which out him ahead of the two Ferrari drivers. Sebastian Vettel set the fourth fastest time in his first ever qualifying attempt for the Ferrari team, while team-mate Kimi Raikkonen lines up fifth on the grid. 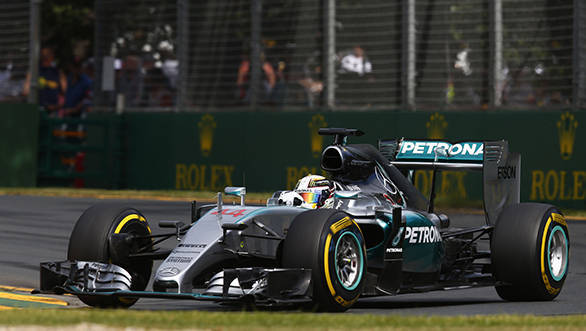 The second Williams driver, Valteri Bottas, rounds up the top 6. However, Bottas will not be starting the 2015 Australian GP, being hospitalized with a back injury.

The weekend has got off to a tough start for the Red Bull team, with Daniel Ricciardo only managing to set the seventh fastest time. Toro Rosso driver Carlos Sainz Jr. Set the eighth fastest time. The two Lotus F1 cars of Romain Grosjean and Pastor Maldonado complete the top 10 qualifiers.

Sauber driver Felipe Nasr took eleventh spot on the grid, narrowly missing the opportunity to make it to Q3 in his first ever F1 qualifying session. And Max Verstappen set the twelfth fastest time on his F1 debut, becoming the youngest ever driver to qualify for an F1 race in his Toro Rosso, even outqualifying the sister outfit Red Bull, piloted by Daniil Kvyat.

The two Force India's lined up next in 14th and 15th place with the second Sauber of Marcus Ericsson 26th.

And it is at the back of the pack that we find the biggest story. McLaren driver Jenson Button only managed to set the 17th fastest time with 1min 31.422sec while team-mate Kevin Magnussen clocked a time of 1min 32.037sec putting him 18th on the grid. It is McLaren's worst qualifying performance in the team's history. They start the Australian GP dead last on the grid, with the two Manor Marussia drivers failing to qualify.