There's change aplenty in Formula 1 this season. It's not just the rule changes or the engines that are different, nor the driver line-ups. The FIA has made a couple of tweaks here and there to the races themselves. Case in point - the otherwise sunny race at the Bahrain International Circuit at Sakhir, is now a night race under the floodlights. This means the track temperature is cooler, as are the drivers, during the course of the race. And so it was that under the floodlights at Bahrain, Nico Rosberg took his Mercedes GP W05 to pole position at the third race of 2014. It is the first time this year that Rosberg will start a Grand Prix from the front row of the grid. It is also the first time this year that the German driver has outqualified his team-mate, 2007 World Champion, Lewis Hamilton. 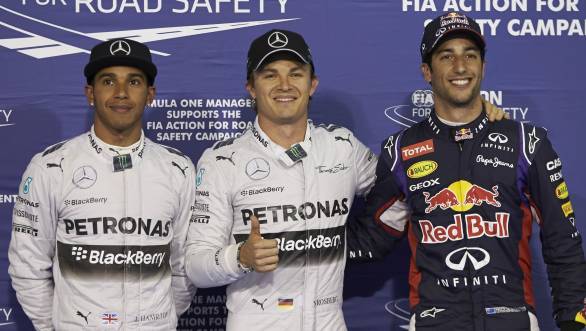 Now speaking of Lewis Hamilton, it was Hammy who was the fastest man all weekend long. The Briton set the fastest time during FP1 and FP2 on Friday, with team-mate Rosberg a close second. Hamilton also set the fastest time during Free Practice 3, while Rosberg held onto second place once again. However, it was Nico's turn to pip Lewis for pole during Q3. Hamilton's last attempt at stealing pole from Rosberg was scuppered when he ran off track on his final attempt. This put Rosberg home safe. Hamilton settled for second on the grid. Red Bull driver Daniel Ricciardo set the third-fastest time of the session, but will start the race 10 places down the grid due to the penalty the Red Bull team received for unsafe release of his car in the pitlane during the Malaysian GP. This promotes Williams driver Valtteri Bottas to third spot on the grid for tomorrow's race, while Sahara Force India's Sergio Perez will start the race fourth.

Starting tomorrow's race from fifth place on the grid is Kimi Raikkonen, who for the first time this season managed to outqualify his Ferrari team-mate Fernando Alonso. Jenson Button, Felipe Massa, Kevin Magnussen and Fernando Alonso round out the top 10 fastest drivers of the session.

There was one major surprise during Q2 though, and that was the fact that four-time world champion Sebastian Vettel didn't manage to make it into the final qualifying session, making it the second time this season that he has failed to make it to the Top 10 during quali. On his slow-down lap Vettel complained that the downshifts were terrible, making the team aware of the situation over the radio. Another surprise was perhaps that Nico Hulkenberg was also knocked out during Q2. Hulkenberg declared that it was due to his own error - he made a mistake on Turn 11 and ran wide on the exit kerb ruining his lap - that he was relegated to the midpack.

The Lotus team showed that they still have a very long way to go in terms of getting back up to speed with Pastor Maldonado failing to make it to Q2 and Romain Grosjean not able to make it to Q3. 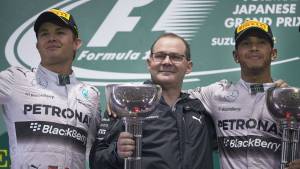 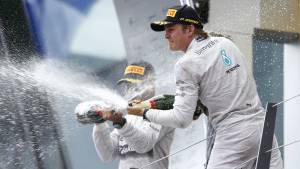