Nico Rosberg is on quite a roll, isn't he? The driver became the first ever German to win a Formula 1 race at a German track in a car that is of German make when he won the 2014 German GP at Hockenheim in his Mercedes AMG F1. Needless to say, the Mercedes team was particularly happy. Their joy is only partly because of Rosberg's latest win, which, we might add, was a faultless victory. What they're also happy about is the fact that Rosberg and Lewis Hamilton seem quite uncatchable in 2014, and with half of the season done, and their drivers leading the championship standings, things are looking very good indeed. After the German Grand Prix, Rosberg leads the championship standings with 190 points, with Hamilton on 176 points and Daniel Ricciardo third with 106 points. 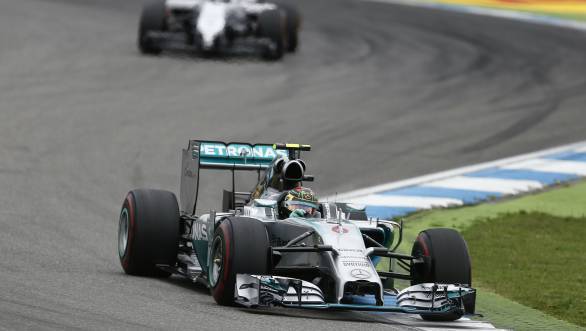 Rosberg on his way to victory at the 2014 German GP

Rosberg's win was something that came easily to him. He didn't put a tyre wrong, having got pole at Hockenheim on Saturday, which he managed to convert into a win. The drive of the race probably went to his team-mate Lewis Hamilton, who took his Mercedes from 20th on the grid to the last step of the podium. Hamilton started the race from 20th after having crashed in qualifying due to a brake failure. Hamilton charged through the pack with more than just a few hairy manoeuvres along the way. He clipped Adrian Sutil's Sauber, Kimi Raikkonen's Ferrari and Jenson Button's McLaren on his charge to third place. But despite the last incident causing him trouble enough for Mercedes to call him in early for his second of three pitstops, he managed to get to the podium. In fact, as the chequered flag fell, Hamilton was only 1.7 seconds away from Bottas. 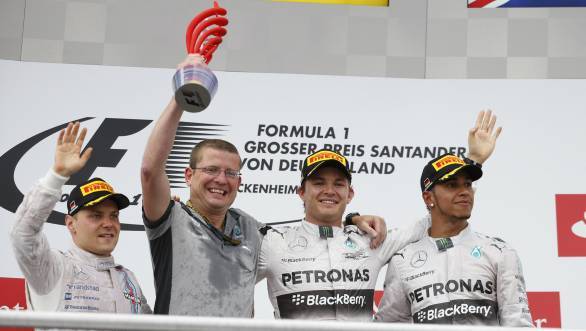 Nico Rosberg, flanked by Valtteri Bottas and Lewis Hamilton on the podium at Hockenheim

Speaking of the Williams driver, Valtteri Bottas started the race second on the grid, with team-mate Felipe Massa third. It was the second race in a row when Massa had bad luck. After being taken out by Kimi Raikkonen at his 200th Grand Prix at Silverstone, Massa was hoping for a better finish, given that he was starting third on the grid at Hockenheim. That didn't happen, though. An incident with Kevin Magnussen, flipped Massa's Williams over. Massa declared that since he was the car ahead, it was Magnussen who ought to have kept an eye out, thereby avoiding the crash. However, the stewards deemed it a racing incident, and while Massa retired, Magnussen went on to finish the race ninth. Meanwhile Bottas took his third podium finish in as many races, with a fine second place.

Finishing fourth at the German Grand Prix was Red Bull Racing's four-time world champion Sebastian Vettel. Fifth place went to Fernando Alonso, who, on a two-stop strategy, had managed to get past Jenson Button and had a couple of more dices along the way too, particularly with a resistant Daniel Ricciardo. Nico Hulkenberg and Button took seventh and eighth place, with Sergio Perez bringing the second Sahara Force India home tenth.