The 2014 season of Formula 1 has been something of a Mercedes wash. Drivers Nico Rosberg and Lewis Hamilton have traded the lead in the championship, with each battling for supremacy within the team and in the title chase as well. So far it has been Rosberg who has managed to come out tops, currently leading his 2008 title-winning team-mate by 10 points in the championship standings. The results of the Hungarian GP are crucial for many reasons, the most important of which is that it could very likely tip the balance of the championship. 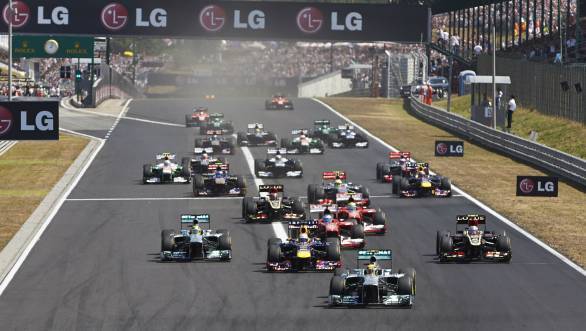 Going into the Hungarian GP, Lewis Hamilton is the favourite for the race win. Why? Because of the spectacular record that he has at the Hungaroring. Hamilton has take four wins at the track, having won the last two races there. He'll be hoping to make it three in a row and retake the lead in the championship, or, at the very least, close the gap to Nico Rosberg. If Hamilton does win again, with team-mate Rosberg finishing second, it will still mean that Rosberg leads the championship. The reason that this race is so very critical, is that a win here could result in the championship lead. And heading into the four-week F1 season break as championship leader is a huge psychological advantage for a driver.

There is competition for the Mercedes AMG F1 duo, though. The most significant challenge could come from the drivers of the resurgent Williams team. Of the last three races, Williams has managed to get onto the podium in every single one of them, thanks to Valtteri Bottas (third in Austria, second at Silverstone and Hockenheim. The team has often said that they have immense faith in the Finnish driver, and he's beginning to deliver too. If Felipe Massa, who has had strong qualifying results in the last couple of races, manages to rid himself of the bad luck that is plaguing him, he might just prove to be something of a challenge. Williams, with 121 points, is currently third in the championship standings.

Another driver who has been particularly good this season, outperforming his vastly more experienced team-mate, is Daniel Ricciardo, who, with 106 points, is currently third in the championship. The Australian driver has managed to take four podiums this season, including a win at the Canadian GP. And the nature of the Hungaroring could well prove to suit the Red Bulls. We'll be looking forward to seeing exactly what the Red Bull drivers can pull out of the bag at the Hungaroring.

Then there's the track itself. The Hungaroring, at 4.381km in length, is one of the shorter circuits on the F1 calendar. The track features 16 turns, almost all of which are rather slow to medium speed corners. And driver have to lap the circuit 70 times. The track is also fairly narrow, which means that overtaking opportunities aren't very many. Being on pole, coupled with a clever pitstop strategy, could see a driver win the race here. If the rain clouds that are predicted to hover over the Hungaroring this weekend do empty out their contents, we could be in for a very interesting race indeed!