F1 2014: Hamilton breaks Bahrain jinx with a win under the floodlights

With the Mercedes of Nico Rosberg starting the Bahrain GP on pole position, and team-mate Lewis Hamilton starting second on the grid, there was little doubt that it would be one of the Silver Arrows on the top step of the podium. It would just boil down to a matter of exactly who it would be. And given that Mercedes were open to allowing their drivers to race each other, it looked like it could be anyone's guess as to who the winning driver would be. As things turned out at the first ever night race at Bahrain, it would be Lewis Hamilton who would comprehensively dominate proceedings, winning from team-mate Rosberg. Third spot on the podium would go to Sahara Force India's Sergio Perez making it the team's second ever podium finish in Formula 1. The last time they were on the podium was when Giancarlo Fisichella took second place behind Kimi Raikkonen at Spa in 2009. 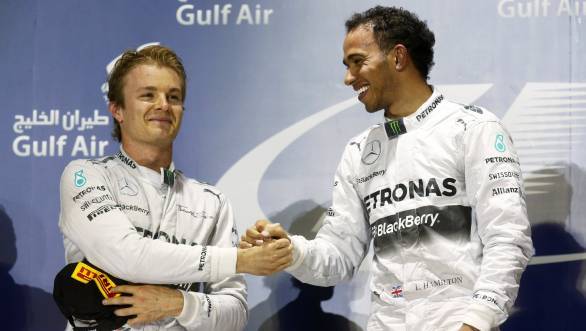 Easily one of the best races we've seen in the recent past, when the five red lights went out at Bahrain it was Hamilton who had the measure of his team-mate Rosberg, moving into the race lead. It was a position that he would have to defend from Rosberg on more than one occasion during the race, especially towards the closing stages of the Grand Prix given that the Safety Car had negated his lead. But Lewis was up for the challenge, defending valiantly even as Nico tried to get alongside and snatch victory away from him. While Paddy Lowe had said to each of the drivers over the team radio to just bring their cars back home, it certainly didn't seem like he meant for them to hold position. Well, if he did, they weren't listening at any rate. And so they went for it. It was a good and clean battle, with Lewis emerging victorious at the end. A rather sullen Nico stood beside him on the podium declaring that he really didn't like finishing second to his team-mate and promising that he'd take victory at the next race. And the man on the third step of the podium was all smiles - Sergio Perez had managed to take his first podium of 2014.

Let's talk a little about Perez, shall we? The Mexican driver has had a rather unusual time in Formula 1. In his four years in Formula 1, Checo, as he is affectionately referred to, has raced for three different teams. First Sauber, then McLaren and now Sahara Force India. And of these three teams, the only team with which he hasn't managed to score a podium has been McLaren. A rather distinct, if forgettable, statistic. Well, Perez managed his fourth ever F1 podium under the bright halogen lights of Bahrain, despite the Red Bull Racing car of Daniel Ricciardo haranguing him and attempting to slip through onto the rostrum himself.

The race had been a tough one for Ricciardo. But one that certainly proved just how talented the young Australian driver is. After having set the third-fastest time during qualifying, Ricciardo was only able to start the race thirteenth on the grid no thanks to the 10-place grid penalty that was carried over from the Malaysian GP. Starting that far down the grid certainly wasn't going to stop him from getting as close to the podium as was possible. The Red Bull driver carved his way up the field, defended deftly attacks from his team-mate Sebastian Vettel, passed the second Force India of Nico Hulkenberg, and managed to pick up his first points of 2014. There's certainly going to be plenty more to watch out for from this one!

Finishing fifth was Nico Hulkenberg, who started the race eleventh on the grid. Four-time world champion Sebastian Vettel could do no better than fifth, having started the race tenth. Felipe Massa, Valtteri Bottas, Fernando Alonso and Kimi Raikkonen rounded out the top 10 at Sakhir.

There were a few retirements along the way, though. Both the Saubers retired - Adrian Sutil and Esteban Gutierrez. It was the latter's retirement that was scary, when he got punted out of the way by a hard-charging Pastor Maldonado in the Lotus on his way out of the pitlane. Gutierrez's Sauber flipped over, leaving debris across the track and also causing the Safety Car to be brought out. Maldonado was penalised - three times over that too - for causing the incident. During the Bahrain GP itself, he was given a 10-second stop-go penalty. And he has also been given a five-place grid penalty for the Chinese GP, along with three penalty points on his licence.

The McLaren team also had a double retirement with Kevin Magnussen and Jenson Button both having clutch trouble causing their McLarens to give up. Marcus Ericsson in his Caterham and Jean-Eric Vergne (who had incidentally accused Maldonado of trying to kill him during the race) in the Toro Rosso were the other casualties of the Bahrain GP.

Nico Rosberg currently leads the driver's championship with 61 points, ahead of Hamilton on 50 points and Hulkenberg third with 28 points.