The 2015 season of Formula 1 is shaping up rather nicely for Daniel Ricciardo in particular. After winning (at least on track) in Australia, he managed to win his first proper race at the Canadian Grand Prix. Then he took his second win of the season at the Hungarian GP before Formula 1's summer break. And, now, after the mid-season break, he's gone and done it again. Ricciardo converted a fifth-place starting position into race victory at the Belgian Grand Prix. 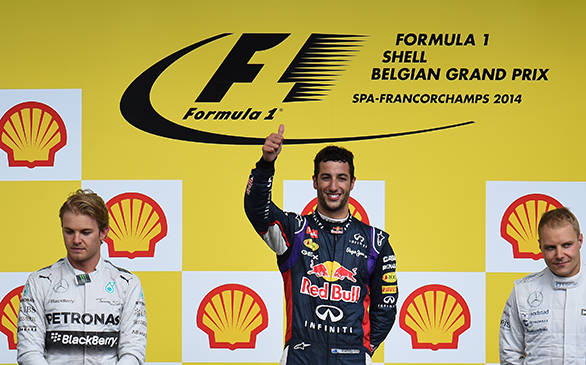 Nico Rosberg had claimed pole for the Belgian GP, with team-mate Lewis Hamilton second and Red Bull Racing's Sebastian Vettel third. At the start of the race though, it was Hamilton who moved into the race lead. Of course, championship leader Rosberg wasn't content with second place and he attacked for the race lead on lap two, with disastrous results. He clipped Lewis' rear tyre, damaging his own front wing and resulting in a puncture for Hamilton. This dropped Hamilton to the back of the pack and resulted in Ricciardo taking over the race lead. Ricciardo then held onto his position at the head of the pack all through.

Rosberg managed to look rather comfortable in second place, and, after a late third pitstop for soft tyres, even managed to cause Ricciardo some worry. But the Red Bull proved to be far too strong to be challenged for race win - Ricciardo took his third win of the season and leapt onto the podium broad grin and all. Rosberg, in second, was booed by the Belgian fans for the incident with Hamilton, while third place went to Valtteri Bottas. The Williams driver had made a last minute move on Ferrari's Kimi Raikkonen to take third place, leaving Raikkonen in fourth, which was also his best finish of the 2014 season. 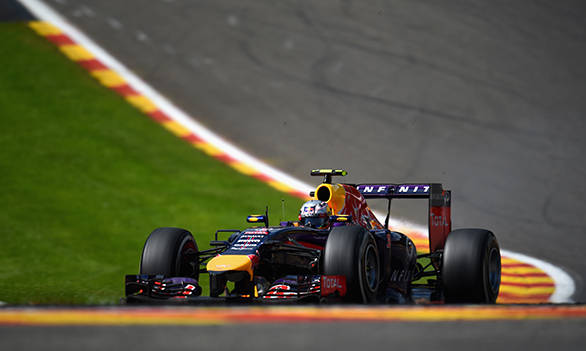 Hamilton's race ended with 6 laps to go when he retired from 16th position, the team deciding to save the engine. But the true story of the race that everyone is talking about is the clash between Rosberg and Hamilton, particularly as Rosberg reportedly admitted in a team meeting that he had bumped Hamilton in order to "prove a point." The driver now has a 29 point lead over Hamilton, however, the repercussions of what he has admitted are still to be felt.