The Hungarian GP turned out to be a thriller of a race, something that we weren't certain would happen, given that Nico Rosberg was on pole. But when rain came down on the track at Hungary, it appeared that the race was anyone's to take. 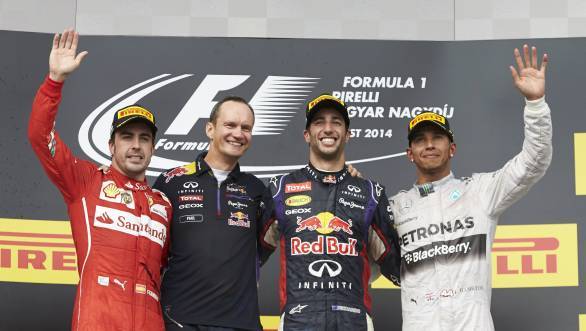 When the five red lights went out at the Hungaroring, Nico Rosberg managed to hold onto the lead. In fact, Rosberg even led the race in the initial stages, with Valtteri Bottas trailing in second place and Sebastian Vettel in third. Rosberg's Mercedes team-mate, Lewis Hamilton started from the pitlane. This, because he was unable to complete qualifying, with his Mercedes AMG F1 catching fire after Turn 13 on his very first fast lap. The first lap of the race saw Hamilton brush the barriers and spin after Turn 2, which meant that the race was already looking more than just a little complicated for the British driver. But a masterful drive saw him claw his way up the order.

The turning point in the race was probably when Marcus Ericsson crashed and the Safety Car needed to be brought out. This meant that the leading drivers had to spend an extra lap behind the Safety Car before they were able to pit for dry tyres. It was advantage Red Bull at that point, with Daniel Ricciardo taking the race lead ahead of the two McLarens of Jenson Button and Kevin Magnussen. As things turned out, the McLarens would end up being also rans, finishing no higher than 10th (Button) and 12th (Magnussen) in the race, due to poor tyre choice.

When Sahara Force India drivers Sergio Perez and Nico Hulkenberg had a collision, that brought out another Safety Car, Ricciardo and Bottas decided to pit. This meant that Alonso managed to take the race lead. But the fact that he was on soft Pirellis meant that he wasn't able to avoid being overtaken by Ricciardo. Which meant that the broadly grinning Red Bull Racing driver managed to take his second win of the 2014 season, ahead of Fernando Alonso and Lewis Hamilton.

Hamilton managed to charge through the field all the way to the podium, despite the fact that at one point during the race his Mercedes team asked him to move over and allow Nico Rosberg to get past him. Something that Hamilton resisted. As F1 heads into its four-week mid-season break, it now means that Nico Rosberg still heads the championship with 202 points, ahead of Lewis Hamilton on 191 points and Daniel Ricciardo on 131 points. And it also means that there will be some very frosty silences in the Mercedes AMG F1 camp.