Everything you needed to know about the Race Suzuki Gixxer SF

1. What's that all about then?

Suzuki, as we have already reported, decided that the volume motorcycle space in India has become a little too cut throat to survive in. The competition was too tough, too big and too much effort was being required to achieve too small a result. They decided to realign their Indian business and focus more on premium motorcycles and on being an innovative motorcycle manufacturer. 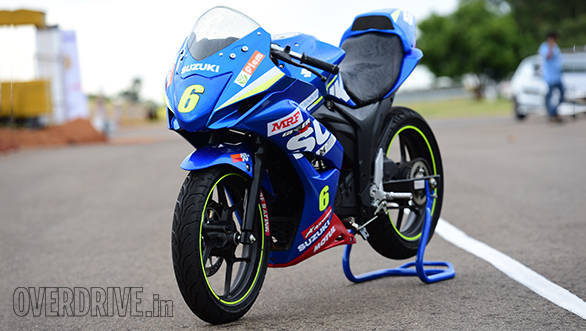 The Gixxer, their new 155cc motorcycle for the 150cc segment space turned out to be a segment buster. It not only had the right spec, it also had a special feeling about it that marks motorcycles and scooters (think TVS Scooty Zest) as being more than the sum of their parts. Of offering a bigger thrill than the spec sheet or pricing suggests. The SF could be called a cosmetic sportsbike but the visual upgrade combines well with the essential goodness of the Gixxer to produce a motorcycle that's very satisfying to ride. 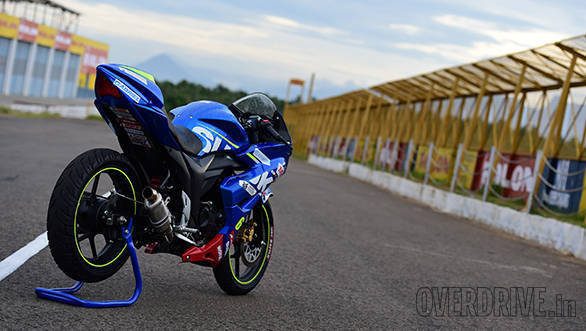 The one-make race series, then, is the next step in Suzuki's new found enthusiasm for motorcycle enthusiasts. Atul Gupta, executive vice president of SMIPL, told OVERDRIVE at the Kari Motor Speedway on the event of Round 1 of the Gixxer Cup that Suzuki expects the racing to have a positive rub-off on the Gixxer brand as well as the Suzuki brand. One might discount motorcycle racing as something that happens in the south of India but there are enough signs that the interest in racing is slowly increasing.

Essentially, a one-make race series is a racing championship where all the racers ride exactly the same machinery. India is perhaps unique in the sense that many manufacturers who go into racing tend not to want to race against another manufacturer. But that apart, one-make racing, like the Polo Cup (now the Vento Cup) is a good way to nurture new talent and give this new generation of racers an even platform to shine on. 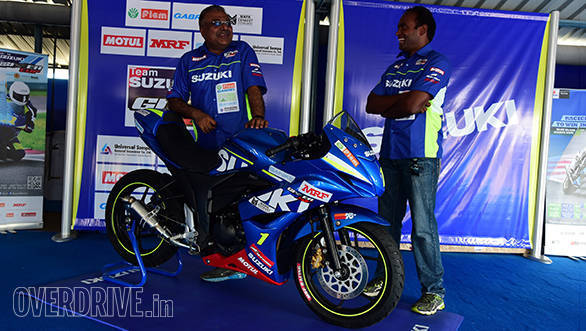 We have the full details on the Gixxer Cup in another story but the upshot is that Suzuki will host two categories over five rounds - the first of which has just happened. The experts and the novices will have their own races with Suzuki offering them both race-prepped Gixxer SF motorcycles.

3. Race-prepped? Sounds interesting - what have they done?

Suzuki set out to create a racing platform that offers more engine performance than stock but the focus has been on refining the handling to create a motorcycle that would make experts happy and allow novices to become fast without being intimidated by the feel of it. So here's what Suzuki did.

Engine
The internals of the Gixxer engine have not been touched. So crankshaft, pistons, valves, valve timing, ignition maps etc are all bone stock. What Suzuki have done is thrown in a new free-flowing intake as well as a free-flow exhaust. To accommodate both of these, the carburettors have new jetting. Finally, to make the most of the new found torque, Suzuki swapped the stock 15T front sprocket for a new 16T unit that raises the gearing and allows a higher top speed. How much power is the Suzuki making now? Suzuki officials told us that the official dyno testing will follow the finalisation of the chassis setup but they estimate that the bike is making around 18-19PS.

Suspension
Again, Suzuki chose to keep the suspension unaltered. However, the front fork sits 20mm lower in the triple tees that makes the bike sharper to steer and more responsive. That aside, Suzuki found the stock suspension capable enough to handle racing duties without alterations being needed. Suzuki do have a chassis test with Indian and Japanese test riders later on that might lead to slight adjustments for an even more effective platform. 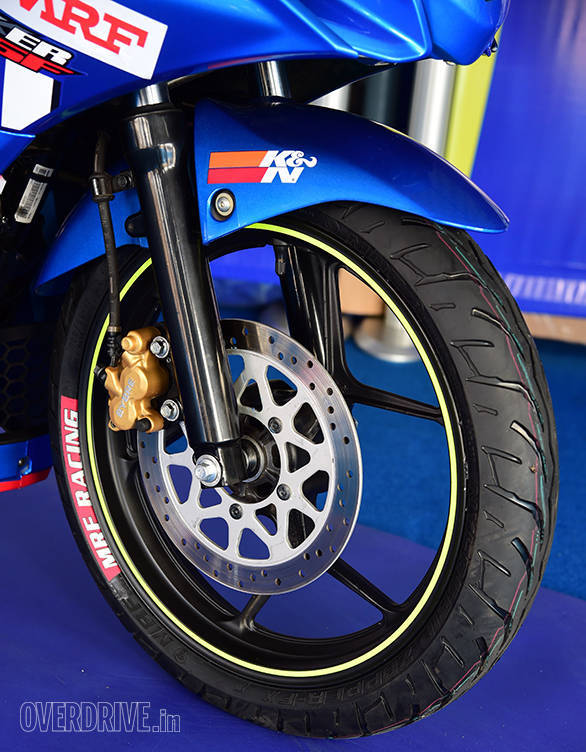 These MRF tyres are race only and no, you cannot buy them

Suzuki commissioned new, bespoke soft compound tyres from MRF for the race bike. Being race tyres, they offer a lower, more aggressive profile with harder sidewalls and a softer tread compound. These tyres are race only and no, you cannot buy them. Suzuki says that already their chassis allows the street bike to run softer compound radials than competing brands without any change in tyre life and the race rubber just isn't needed for the street. 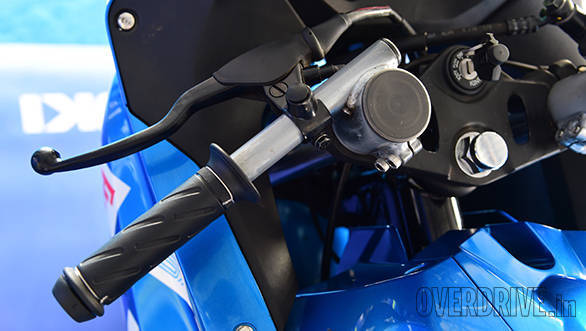 New clip-ons position the bars lower and closer to the motorcycle. Note 20mm lower position of the triple tee on the race bike

The race Gixxer SF uses clip-ons for handlebars. That means the bars sit lower and are much closer to the centre line of the motorcycle. This usually means you feel more of the front-end's grip and reactions but on the street, it's a harder ergonomic challenge to have to deal with on the commute - so don't rush out and get clip-ons just yet on your street SF. The lowering of the front forks also causes a small lowering of the seat height. Finally, Suzuki have a set of rearsets that move the footpegs back 15mm and up 20mm for a more racy, more plugged in riding position. The rearsets and the exhaust were designed together and Suzuki estimate that it increases the available lean angle by between 5 to 10 degrees - extremely significant. A more formal number might become clear later on.

4. What of these can you do to your Gixxer SF. And should you?

Well, the engine changes are out. The race SF is loud and being a race bike, it isn't beholden to a whole gamut of regulatory requirements for road use. The 20mm drop in the front fork is easy to replicate though. Suzuki's setup suggests that the dropping of the fork should not cause any clearance problems when it comes to the front wheel touching the chassis even under hard braking. On the other hand, lower ground clearance might create problems that you will have to deal with. The dropped fork will create a faster feeling front-end and if you like that, that's great. If you don't, it is reversible. Similarly, you can obviously go out and clip-on your motorcycle and see if the lower handlebar position is your cup of tea. What will be harder to do is the rearsets. If you do want those exact units, drop us an email and we will try to see if you can purchase a set.

I absolutely loved it. Thanks to the regular visits to the Kari Motor Speedway near Coimbatore for the TWO School run by Indimotard and OVERDRIVE, I've grown pretty familiar with the track. And that allowed me to get on the bike and instantly focus on what it was doing, rather than what I was doing. And I was surprised and exhilarated by what I saw and felt. 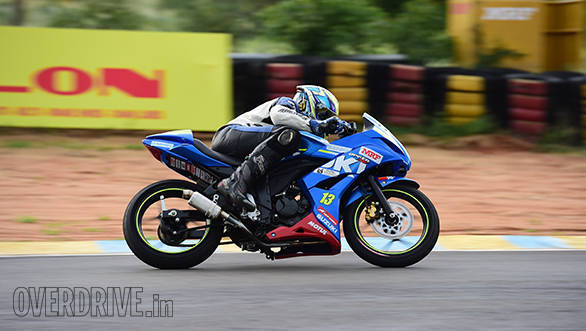 One of the hardest corners to understand at the Kari track is Turn One. You approach this turn at full speed on a small motorcycle like the Gixxer SF. The turn lies at the end of the long main straight. It is a sharpish but fast right hander that leads quickly into a much sharper, much tighter downhill right turn (Turn Two). At the lowest point vertical of this sequence, the track turns left as it starts to rise again. Grasping the line through this is difficult as it makes getting it right extremely complicated and more importantly, extremely satisfying once you get it right.

We were warned that the sprocketing of the race bike had reduced its speed reading to about 15kmph below the actual. Unfortunately, we were also warned that the tuning of the race motors had also made them extremely sensitive to altitude changes. The setup - done at sea level in Chennai - was proving to be less than ideal at Coimbatore which is higher (about 1,100 feet above mean sea level). My first motorcycle (the number 6) refused to cross 8,000rpm and was showing about 109kmph on the meter before I had to brake for Turn One. Later, I hopped on to number 13, which was much, much better, revving cleanly and quickly to 10,000rpm and allowing me to hit almost 10kmph more on the clock before I started braking for Turn One. Suzuki officials told me later that once they'd finished rejetting the carburettors for the new altitude, the bikes got even faster. During the first races, the bikes were hitting almost 145kmph (actual, not indicated) at the Kari track. That's fast!

What I immediately noticed about the race bike is that Suzuki have managed to make it extremely neutral and the MRF race rubber is extraordinarily grippy and confidence inspiring. The whole business of hard braking and then flipping the SF on its side for the first part of the turn was accomplished effortlessly. No drama, no fuss. As I settled into the rhythm I found myself braking less and less expecting the tyres and the chassis to do all the work while I basically worked on setting up for the sharper second right turn. 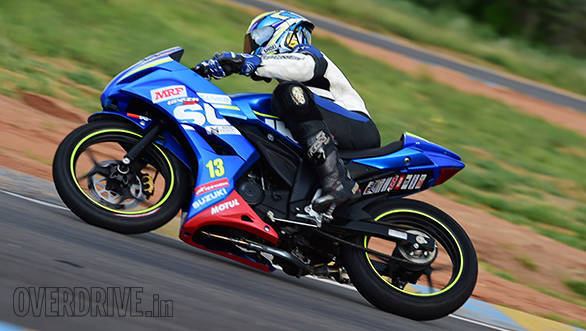 The trick to that second right is to run the bike out wide to the kerb and then make one really sharp and quick steering correction. Once again, the Gixxer SF race bike is so on the ball that this required a lot less effort than I was expecting. And flipping the bike from full lean right to full lean left with the gas coming on also felt natural. It's this ease of operation and how quickly the chassis reacts that make the race bike such an impressive tool. I expect that new riders will feel happy to push themselves and learn new things about their skills and about how to find speed and traction. And more experienced hands will find a capable tool to express themselves with in racing.

6. The engine. You didn't mention the engine at all...

Yes, I know. The free flow exhaust and the racing intake gives the Gixxer SF a nice blat and it sounds lovely on the go. Despite the carburetion issues on bike 6, it was clear that the bike was moving well and acceleration is stronger than the base street bike but just as linear. Bike 13 felt much better and there is so much torque in the middle revs that you can short shift in some places and still keep momentum and pace. For instance, I repeatedly scraped my boot in the approach to the last corner before realising that it was okay to shift up earlier. That I was not really losing any acceleration in this corner, perhaps the most crucial of all when it comes to crossing the finish line first.

You should try it, I think. We have already detailed the process in this story. Suzuki cheekily told us that many of the people who raced the new bike came back and complained that the lovely little race SF made their other bikes feel less capable. Consider yourself warned.