Amittrajit Ghosh and co-driver Ashwin Naik are competing in their first round of the FIA European Rally Championship at the EKO Acropolis Rally in Greece. The duo are taking part in the event's ERC3 category, piloting a  Prospeed-prepared Ford Fiesta R2. After Leg 2 of the event, Ghosh and Naik find themselves in the lead of the ERC3 class of the event.

The ERC3 division features registered drivers in the European Rally Championship, limited to drivers of two-wheel drive cars including R3 and R2 cars. Taking the start at the rally in Greece, were two Citroen DS3 R3Ts, one Peugeot 208 R2, and Ghosh in the Fiesta R2. In the classification between the cars, there are three classes RC2, RC3 and RC4, with Ghosh and the Peugeot being RC4 entries. 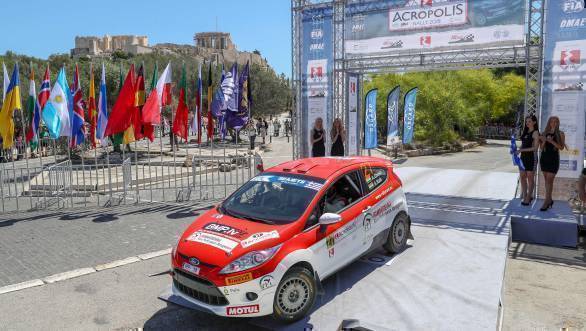 Ghosh appeared to be playing it safe, an approach which helped him to the lead of the category, as his rivals were caught out by tricky conditions.

"The whole plan for the event was not to take any risks but drive at a decent pace, so we were surprised to see that we were only 2 seconds off the fastest [in SS3]," said Ghosh in an official ERC press release.
"For the first 7-8 km [in SS4] we took it almost at recce speed as I knew if you go hot there, you're not going to finish that stage. When I saw our competitor [Chrysostomos Karellis] unfortunately parked, I knew the call was right."

Ghosh was 17 seconds behind category leader Artur Muradian in SS4, but moved to the lead in the category when a wheel bolt failure resulted in Muradian having to retire for the day during SS5.

"In the next stage at the first corner he was parked," said Ghosh "I immediately backed off because it doesn't make any sense to push, and this car can't take it. If you drive anything more than 70 per cent, I don't think any car is going to finish."

Ghosh's nearest competitor, Spanish lady driver Emma Falcón who is piloting a Citroen  suffered a puncture in SS5, allowing him to extend his gap, and hopefully will result in a class victory for him on his ERC debut.