The Indian junta loves asking questions. First, it was about the EcoSport's Indian debut. So, Ford unveiled a production ready concept of the SUV at the AutoExpo last January. Then, we asked what the EcoSport was all about. So, Ford began displaying the SUV in malls across the country. We wanted to dig deeper, so Ford began its extended test drive program. Then, of course, we wanted to know about its launch date, and though the date kept getting pushed forward, it was indicated middle of the year would be the due date. Not satisfied, we wanted to know the price, and just a couple of days back, Ford shocked everybody with a terrific price tag. 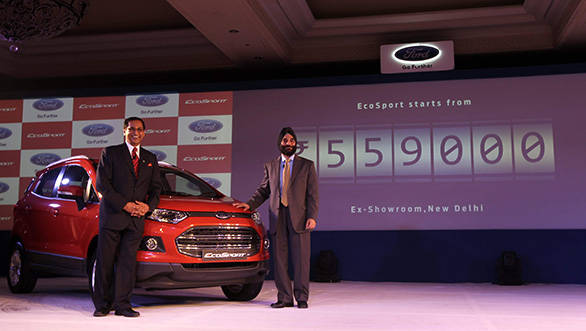 Ford officials announcing the price of the EcoSport in India

Now, we want to know how did Ford manage to price the EcoSport so low? Has it cut corners in manufacturing or quality? Or, is the company simply not making money on the SUV to bring in the numbers? Ford says it is making money on the SUV. As for the quality bit; we have tested two versions of the SUV quite extensively, and the quality, though not outstanding, isn't bad either.

So how did Ford manage this? According to Joginder Singh, president and managing director, Ford India, many aspects contributed to this 'dhamaka' price tag. But, two of these aspects were crucial  global development and economies of scale. Let us explain. The EcoSport is a global platform; one that has been developed not just for India, but emerging as well as mature markets. Moreover, Ford hasn't had to develop anything specific for India with regards to the EcoSport, be it features, electronics or hardware. "All we had to do was decide what features will work in India and then simply plucked it off our huge global network," says Joginder Singh.

And since these systems are made compatible for global platforms, it fit the EcoSport perfectly. Singh cited the example of adopting Sync, a multimedia interface that's available on higher-specced EcoSport models in India to drive home the point.

Then, there's the economy of scale. According to Singh, the price of the EcoSport was signed off quite early and it was based on the fact that the Indian plant will produce a significant number of EcoSports. And not just for the domestic market, mind you, but for exports as well. Besides, the emerging markets Ford India already exports to, it will also ship the SUV to mature markets like Australia, New Zealand and Europe even. He added, high levels of localisation for the EcoSport have also helped in the pricing. Singh however declined to put a figure on the local content, only stating it was sufficient. But, our estimates put it close to 80 per cent.

And this leads us to yet another question  now that we have seen the positive outcome of Ford's new mission, One Ford, will this mean all new products rolled out by Ford India will be equally great value propositions as the EcoSport? We sure hope so because Ford has not only moved the goal post for the competition with the EcoSport's price and packaging, but it has set itself a high benchmark as well. Moving forward every new Ford product will now have to compete against the EcoSport first.