The 100 per cent subsidiary of US headquartered Dynabrade Inc, was formally established in March 2007, though the company had some distributors in the country since the late 1990s. By 2007, the Dynabrade management was convinced of the India story as by then most leading global automakers  its main market  were already present in India and it was time to have a local presence to manage the logistics more effectively.

Nischal Sachdev, managing director, Dynabrade India Abrasive Power Tools Pvt Ltd, has a long association with the company much before it formally established in India. The Indian operations under him also take care of the South East Asia (SEA) and Pacific Rim nations. He welcomed the main distributors and channel partners from across India, specially invited to celebrate the occasion. "It is time for us to take a breather, enjoy the moment and set new landmarks. Being part of our business family, the celebration and the opportunity to meet the management team all at once would enhance your confidence in us and make this journey an exciting one," he said. 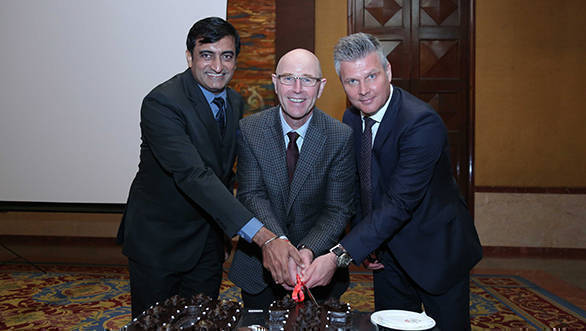 For Hardy Hamann, president, Dynabrade Inc, it was his first visit to India and he was impressed. "It is the perfect position to be in a country where the GDP is growing at seven per cent," he said, "and at a rate faster than China. The fact that over 50 per cent of the billion plus population is young is an added advantage. We are also looking at the political stability the country now offers and the soon to be adopted GST regime, which augurs well for increased business."

Dynabrade is known for its portable pneumatic abrasive power tools, very popular in the automotive world for high quality finishing. Tracing the origins of the company, Hamann noted that it was founded in 1969 by Walter Welsch at Clarence (near Buffalo), New York and the very first product was the iconic Dynafile belt sander which provided the much needed alternative to hand filing and sanding, and is still in production even as it has evolved. Today, Dynabrade has over 800 products sold in over 90 countries globally, and Walter Welsch, now 93, is still active and Chairman of the Board (he has 3 older siblings, one a centenarian). Says something for a company that boasts the durability and high quality of its products, most of which are now available with lifetime warranty.

Dynabrade products are used in such industries as metalworking, woodworking, kitchen and bath, marine, transportation and wherever finishing is required on hard machinable surfaces. Hamann also announced the expansion of the India office and warehouse which will soon move to a more spacious building with almost double the area not far from its present location at Navi Mumbai. With a CAGR of 16 per cent during the last 15 years the company has grown over 70 per cent since 2011 and hence the need for a bigger premises. The company also expects the number of Indian dealers/channel partners to cross 100 from the existing 70. 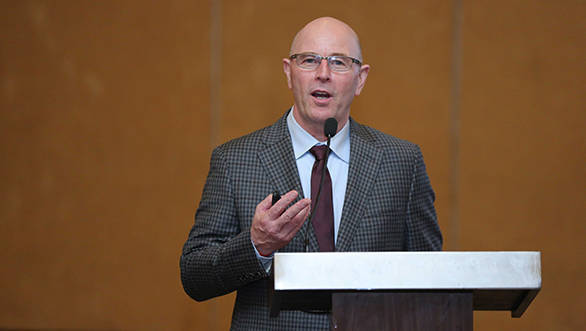 Hamann also elaborated on the Dynabrade strategy for future growth in terms of new products  development of new random orbital sanders, launch of 2.6 HP product line and expansion of source capture vacuum products. The initiatives are moving closer to the customer with a new web-based cost saving programme; and expanding brand exposure through a new design website and social media. The other initiative is investing in plant improvement and new machinery.

Dynabrade India is also associated with German manufacturer of paint spray guns SATA GmbH & Co KG, and Joerg Goettling, head of exports was also present on the occasion. Established in 1907, SATA is also a family owned company, which has many similarities with Dynabrade  both manufacturers of high-quality pneumatic tools for professional users. The SATA product range comprises of paint spray guns, cup systems, air filtration systems and protective breathing equipment  total 3841 articles  and the company's products are sold in over 90 countries worldwide. It may be of interest to note that SATA was basically a manufacturer of surgical equipment including medical sprays and how it developed the first paint spray gun in 1925 is now a matter of company folklore. It was a chance meeting on a bus of the then owner of SATA travelling in the US, with someone at Ford Motors looking for a faster way to paint cars than the manual brush method. If medicine can be sprayed, so can paint, was the simple logic, and an industry was born. "While Germany is still a major market, 65 per cent of SATA products are exported. India has become a cornerstone of SATA business," said Goettling. The company is on the approved list of all major automakers globally, and with two R&D centres, stays ahead on the innovation front.

Together, the two companies  Dynabrade and SATA  have done well in India, with complementary products. They have automotive refinish approvals from all major automakers  market leader Maruti Suzuki, homegrown players Tata Motors and Mahindra & Mahindra, and global companies like General Motors, Ford Motors, Hyundai, Toyota, Honda, Renault, Mercedes, BMW, and the Volkswagen group, among others. Together, their products are used in training centres of these automakers and are recommended by major paint companies like BASF, PPG, DuPont and Akzo Nobel.

Dynabrade is certainly reaping the benefits as a first mover in the Indian market. "Driving a made in India car or riding a two-wheeler, you are almost certain it has been polished by a Dynabrade polisher," says Nischal Sachdev. The company was the first to introduce dust free dry sanding in the market  the electrical vacuum system. It also introduced the first air driven portable vacuum system. Dynabrade India has grown its share substantially in refinish business, is an established player in abrasives with 20 per cent of the turnover from this segment, and will look at strengthening its position as a leading finishing solutions provider in India.

Summing up, Nischal Sachdev presented on the slide a first look at the new random orbital sander range that will be launched soon, the Extreme, which will be superior to the Dynabrade Supreme range.