Ducati showed off the next big step for the Monster, their segment-defining sporty-naked motorcycle at the 2013 EICMA motorcycle show in Milan. The 1200 and its more powerful sibling, the S, are at the top of the Monster family. The Monster, along with the new 899 Panigale and the 1199 Superleggera, was three of the four new bikes Ducati intends to launch for 2014. The fourth motorcycle is expected early in 2014 and is likely to be the new Scrambler that has been doing the spy shot rounds and is probably in the validation stage right now. 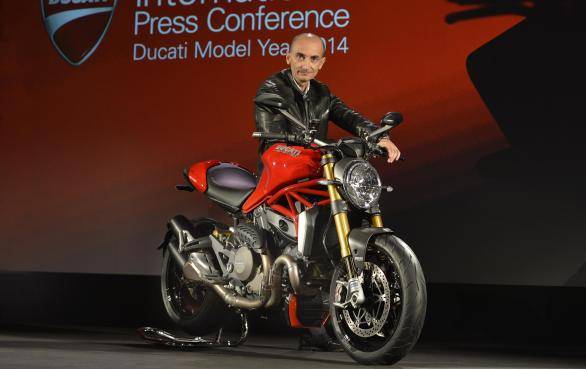 No plans of an 'affordable' Ducati

Ducati also confirmed that it wasn't in the small displacement race at this time. When asked about bikes like the old Monster 400 (specially created for the Japanese 400cc tax class), Ducati officials said that while they were aware that other manufacturers were targetting emerging market middleweight segments, or working towards that, Ducati may not play the same game. They clarified that Ducati is clearly defined as a premium brand and it will stay true to that ethos. This doesn't automatically rule out a smaller-displacement motorcycle but does mean that Ducati, if they were to create, say a Monster 400, it wouldn't be cheap or priced to compete with the likes of the rumoured small Triumph or Bajaj-KTMs. 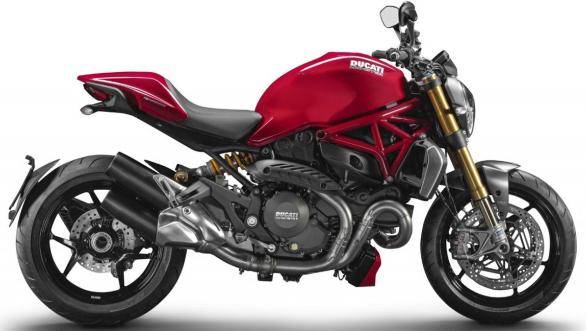 The new powertrain in the Monster uses the 1198 Testastretta 11-degree DS engine from the superbike.

Back to the Monster and it is all-new. The new powertrain uses the 1198 Testastretta 11-degree DS engine from the superbike. That means the 1200 gets 135PS to play with while the S version gets another 10PS on top of that. In the transition from the superbike engine to the "rider-friendly" Monster engine, the Testastretta 11 got a reduced valve overlap to boost low and mid-range performance. On the Monster, a 53mm throttle body set injects fuel and of course, the DS in the name of the engine stands for dual spark.

But the big story is the new frame that the Monster 1200 now wears. It looks like a traditional Ducati trellis but it isn't. Ducati has moved the Monster in the same direction as the Panigale and what you think is a trellis is just a subframe that connects (solidly) the engine to the front-end of the motorcycle.

Welcome to the first of the "frame-less" Ducatis. At the back, the single-sided swingarm mounts directly to the back of the engine. What that means is that the engine is the frame of the motorcycle in effect, allowing the Monster to enjoy twice as much torsional rigidity.

Ducati says the arrangement come with geometry changes to allow more comfort one-up and better ergonomics two-up. The wheelbase is a bit longer, the handlebars rise higher and the seat is all new featuring a seat height adjustment system that allows over an inch of height adjustment.

Suspension is 43mm Kayaba front forks and a Sachs rear monoshock with preload and rebound adjustment. The S brings Ohlins gear instead. Bosch supplies the standard 9MP ABS system with three selectable levels to ensure control over the powerful Brembo M4-32 Monobloc brake setup. Again, while the 1200 gets near 10-spoke alloys, the S gets that Y-shape alloy wheel design that mirrors the Panigale. 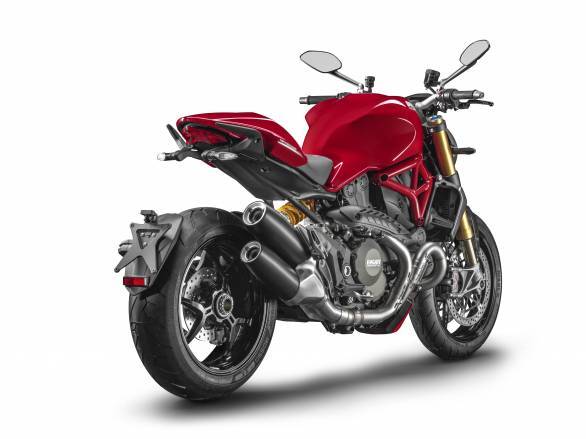 With the aim of making the Monster as rider-friendly as possible, the Ducati also gets traction control (eight levels), three riding modes, rear wheel lift prevention and more.

Ducati have not confirmed this but we expect the Monster line to slowly shift from their trellis frame to this new frame configuration as the updates roll out. The new Monster is promising but its actual feel is going to be a critical area to watch for. The Panigale, which uses the same frame, has been loved for what it represents but many reports also suggest that the extreme stiffness makes for a motorcycle that requires extreme speed and commitment which makes it tiring to ride.

While the Monster was stealing the headlines, Ducati told OVERDRIVE that it was looking at its Indian operation and planning sweeping changes that would overhaul the so far stuttering Indian adventure. [Click here to read details] 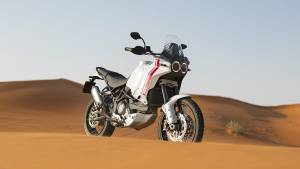 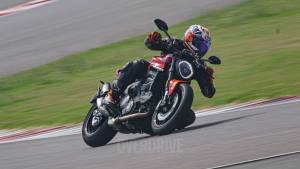