The sixth stage of the 2020 Dakar Rally was the longest stage thus far. Competitors had to battle it out over the course of 830km, which included 478km of special that was exclusively sand and entirely off-road. 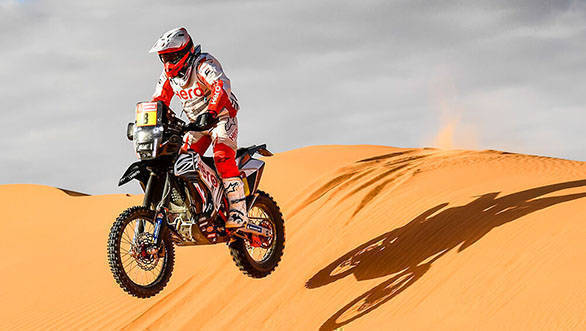 It proved to be a tricky stage for the Hero MotoSports Team Rally outfit, however, with mechanical issues leaving another one of their riders - Sebastian Bühler - out of contention for a position in the overall standings. While Bühler had managed a very impressive and consistent performance over the course of the first five stages of the rally, the sixth stage proved to be a major blow for the German rider, who is competing in his first rally for the Hero MotoSports outfit. Bühler had been riding well over the course of the sixth stage, and seemed like he would make it to the top 15 overall. But a technical issue with his motorcycle meant that he was unable to complete the stage. This means that he will restart the race after the rest day, but will not be included in the overall standings at the end of the rally. "The stage was quite fast and tough today. I was riding well until the second refuel point. After that the bike developed some issues and stopped. I tried to get it started but in the end it didn't start. So now we will look into the issues and try to fix it and restart the race after the rest day," said a somewhat disappointed Bühler. 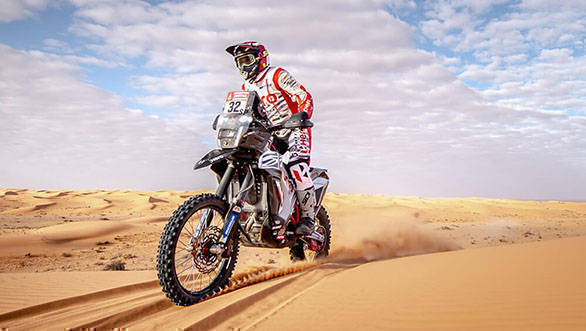 Technical issues meant Sebastian Buhler could not complete Stage 6 of the 2020 Dakar. He will continue the rest of the rally in the Experience category

Fortunately for the team, Paulo "Speedy" Goncalves continued his stellar run to finish eighth in the stage, taking his third top 10 finish in a row. This means that despite the fact that the disastrous third stage set him back a lot, he's managed to steadily climb his way up the order. At the halfway mark of the rally, Goncalves is ranked 46th. Speaking of Stage 6 Goncalves said, "Today was a really long day in the rally with 800+ kms to be ridden. It was a beautiful stage with scenery full of sand and the dunes. I decided to go fast today and enjoyed the change of pace a lot. I am happy to deliver another good stage for the team." 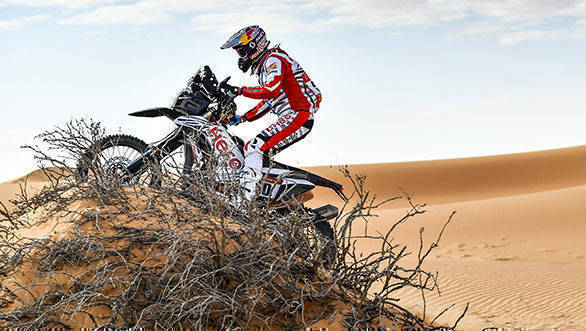 CS Santosh seems to have come into his own as the Dakar reaches the halfway mark. The Indian rider is ranked 36th overall.

Another rider who delivered a good stage for the team was CS Santosh. The Indian rider performed very well, and made it to 31st in the stage. This means that he is currently the highest-placed Hero rider in the 2020 Dakar, currently ranked 36th overall. Santosh's hand injury was exacerbated by the long hours riding in the dunes, but he still sounded upbeat at the end of the day. "Today's stage was very difficult for me as it was very fast and sandy which made my bike move a lot and aggravated my hand injury. So I didn't enjoy the fast pace of today but I am really happy to have made it through the first week of the Dakar. It has been tough and gruelling for the entire team so I am looking forward to the rest day tomorrow to get some rest and get ready for the next week," said Santosh. 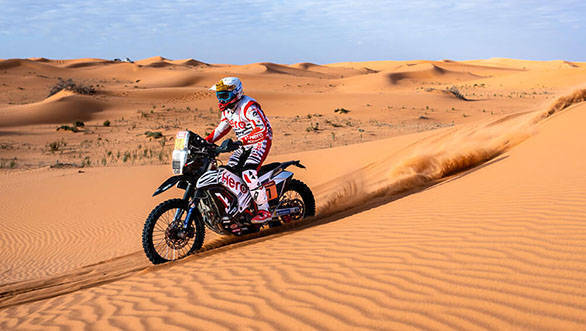 Also performing well in Stage 6 was Joaquim "J-Rod" Rodrigues, who managed to finish 27th. "Today was a good day for me. I started the stage really well and passed a few guys until I reached the refuel point. There I noticed some kind of a liquid dropping out of the bike and immediately decided to take it safe so I am really happy to get my Hero to the finish line today. We are here after finishing the tough first week and it feels good. Tomorrow we take the rest day and try to rest and recover for the next week of the Dakar," said J-Rod.

Despite the technical issues that have plagued the Hero MotoSports team over the course of the first week of the Dakar, some impressive starts and stage performances have also yielded good results. After the rest day that will allow the team and riders to recover both physically and mentally, they will tackle the longer, harder, second week of the Dakar.

Stage 7 is the longest stage of the rally, with a 546km special, after which the Dakar will see even longer stages, a marathon stage, and the finish at Qiddiyah on January 17th.