Carlos Sainz has done it again. The Spaniard has claimed his third Dakar Rally title, with victory in Saudi Arabia. Sainz ended the rally with a time of 42hr 59min 17sec, a full 6min 21 seconds ahead of his nearest rival and defending Dakar champion Nasser Al-Attiyah. 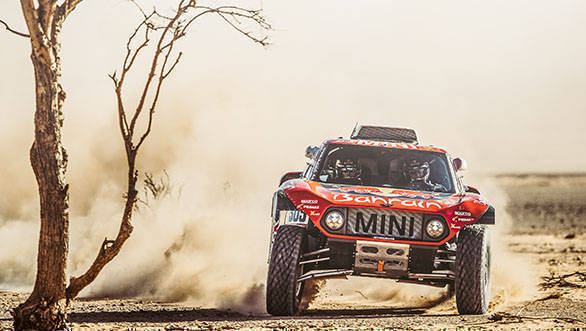 While it was Nasser Al-Attiyah who took victory in Stage 12 of the Dakar, the Qatari driver couldn't overhaul his rival's lead at the head of the order. Al-Attiyah, who drives a Hilux for the Toyota Gazoo Racing outfit, performed well all through the 2020 Dakar, chasing Sainz down all through, but never managing to get the better of him. Third place overall went to Sainz's X-Raid Mini team-mate, Stephane Peterhansel. Mr. Dakar, who has won the event a whopping 13 times (six times on bikes and seven times in cars), claimed four stage wins, after recovering from issues early on. The Frenchman had a hard time at the rally, with new co-driver Paulo Fiuza navigating for him in English. This is the first time that Peterhansel has not used a French-speaking navigator at the Dakar.

Possibly the most high profile driver at the 2020 Dakar, Fernando Alonso finished 13th overall, taking home the prize for best rookie at the event.