The 2019 Dakar Rally is well underway with competitors having negotiated the second stage of the 5,000 km long event. Nine-time WRC champion Sebastien Loeb narrowly held on to the lead to finish first in the Car category over the 342 km stage. 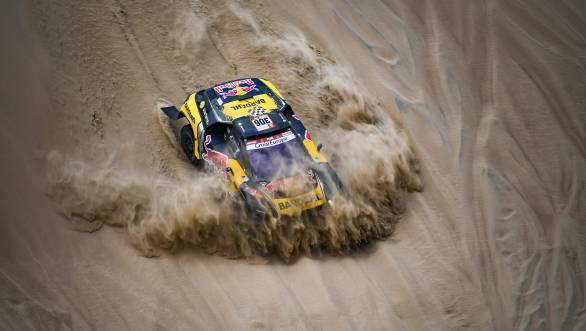 Sebastien Loeb and Daniel Elena in the Peugeot 3008 of the PH-Sport going down a dune during stage 1 of the Dakar Rally, between Lima and Pisco, Peru

Following merely eight seconds behind Loeb was Nani Roma in an X-Raid MINI. Toyota driver Bernhard ten Brinke finished in third position, a minute behind. Brinke consistently challenged Loeb over the course of the stage but eventually couldn't hold onto his position.

This means that Loeb now has stage wins in every Dakar he has competed in. A notable retirement was that of X-raid MINI driver and five-time Dakar stage winner Orlando Terranova, who crashed out at the 178 km mark.

At the end of stage 2, the overall Cars classification is led by Giniel de Villiers/Dirk von Zitzewitz in their Toyota, with a time of 4h 32m 45s. They are 28s ahead of teammates Bernhard ten Brinke/Xavier Panseri. In third, 42s behind, is the X-Raid MINI duo of Nani Roma/Alex Haro. 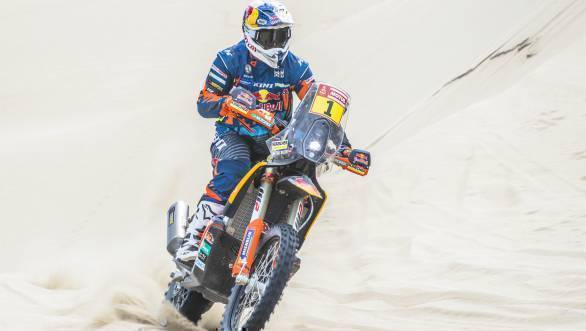 Barreda tops the overall Moto classification with a time of 4h 23m 14s at the end of Stage 2. Matthias Walkner and Ricky Brabec followed with a time difference of 1m 31s and 1m 33s respectively. 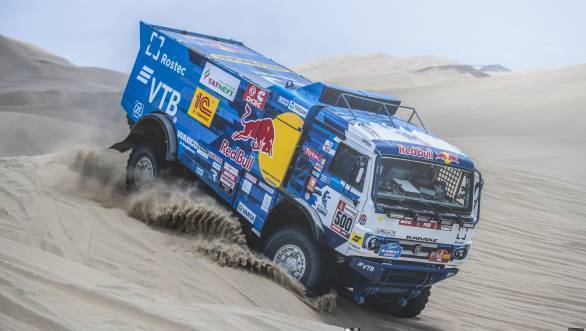 In the Trucks category, Kamaz driver Eduard Nikolaev won his second consecutive stage. In the SxS class, Chaleco Lopez from Can-Am was 19s ahead in this stage but teammate Reinaldo Varela still has a 1m 8s overall lead overall. Nicolas Cavigliasso continued his dominance in the Quad class, finishing Stage 2 11m 18s ahead of closest rival Gustavo Gallego. He now has a 21m 14s over Gallego in the overall timings.