The third stage of the 2019 Dakar Rally was the stage that saw the going get really tough, with the terrain catching out several competitors. However, Oriol Mena continued to perform strongly for the team, unfazed by the mix of dunes, rocks, mountains, fesh-fesh and fog that marked the journey from Marcona to Arequipa. 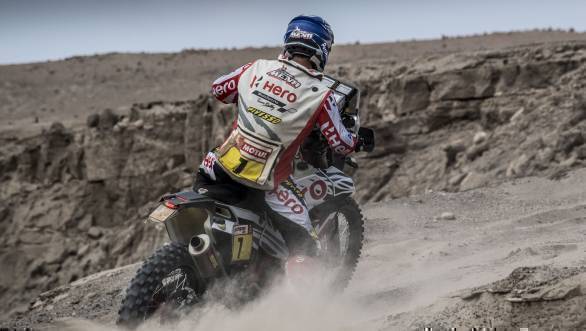 While other competitors across the various categories of the rally ended up falling by the wayside, including prominent names at the top of the leader board, Mena did very well. He blazed through the entire stage quickly, and managed to end the stage eighth. This meant that he climbed the timing sheets and is currently ranked 12th overall after three stages of the rally.

But Mena himself was quick to acknowledge just how challenging the stage was. "Today was a really tough stage, the kind that we know Dakar for. Conditions were difficult with a lot of fog in the mountains, many stones and fesh-fesh. The navigation also was quite tricky. So I decided to ride with caution today, trying to avoid any mistakes and managed to catch all the waypoints. I am happy with the result today and the way my bike is performing. Now we prepare for the Marathon stage!," he said. 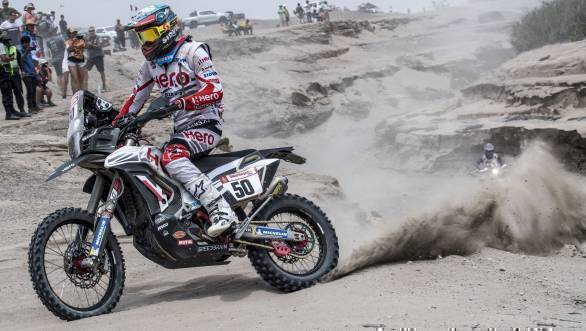 The stage was really tough for CS Santosh, who had a few falls along the way to the finish line. Losing time meant that Santosh ended the third stage of the rally in 64th position, putting him 42nd overall in the Moto category of the event.

Speaking of the stage, Santosh said, "It was an extremely difficult stage, throwing a fair share of challenges. I had the wrong lens on for today's stage and it set me up for the struggle for most of the first part. So I decided to ride without my goggles, which was really difficult to do. Had a few crashes, lost my way around a waypoint, so in all a very tough day. I am glad to have seen the back of it and still be in the race." 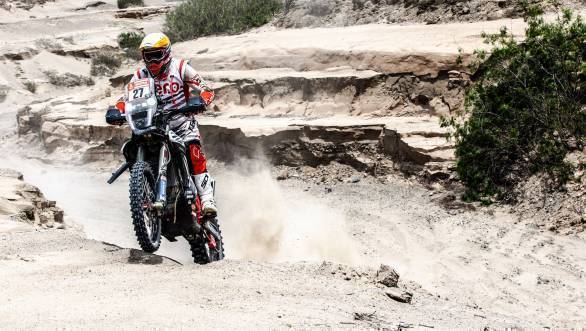 "I spent most of the stage today at the back of the pack in the dust. I developed a decent rhythm soon and passed a lot of guys but then I got lost and had to find my way back. I recovered from that to again end up spending almost an hour in finding a tricky waypoint. A lot of guys lost time around that waypoint too. I think it was a hard day but the important thing is that I made it back to the end with my bike. Tomorrow will be a new start of a new day," JRod said.

Despite the setbacks, the Hero MotoSports team is determined to take positives from the day and are looking ahead to the Marathon Stage of the rally, where competitors will have to fend for themselves in the desert, repairing their motorcycles on their own. Riders will complete 106km of liaison stage, and 405km of special stage on their way from Arequipa to Moquegua.