The Dakar turns forty this year! That's right, the 2018 edition of the Dakar Rally is also the 40th time the event has been run since it was first held in 1979. This year's event, which kicks off in Lima, Peru, also marks the 10th anniversary of the event's relocation to South America. After tackling the treacherous terrain in Peru, the competitors will head to Bolivia for a few days of intense rallying, before heading to Cordoba in Argentina where the event will conclude. 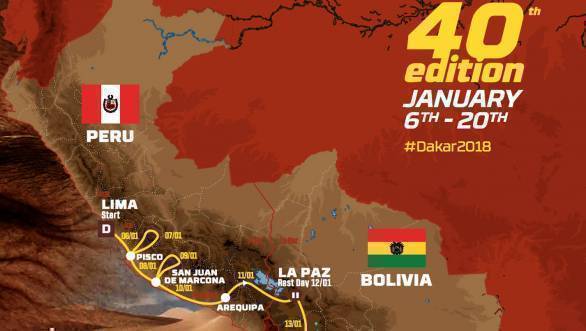 Peru:
Peru makes a return to the Dakar after a four year hiatus. Between the 6th and the 11th of January, competitors in the Dakar 2018 tackle the challenges that the country throws their way. This includes the sand dunes and the canyons in Pisco, which are expected to be very tricky. By the third stage of the rally, the challenges are meant to increase, with drivers and riders having to cross terrain that includes chotts (a lake that remains dry most of the year) and also having to navigate some canyons. The fourth stage sees the competitors rally along the beach in San Juan de Marcona, with the motorcycles setting off 15 abreast, while cars set off four in a row. En route Arequipa, though, the motorcycles and the quads will separate from the cars and trucks. The Dakar will move from Peru to Bolivia on the sixth stage of the event. 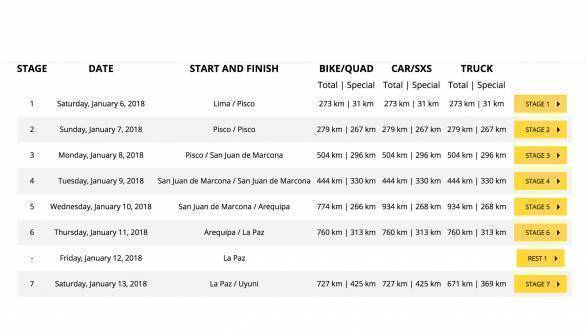 Bolivia:
After heading to Bolivia, the competitors get a day of rest before the rally heads to Uyuni for the first part of the marathon stage. The second part of the marathon stage, where competitors have to service their own vehicles without the help of their respective rally crews, involves a distance of 498km - the longest of the entire rally. Along the way competitors have to contend with sand dunes as high as 3500m above sea level. The ninth stage of the rally involves a journey from Tupiza to Salta in Argentina. 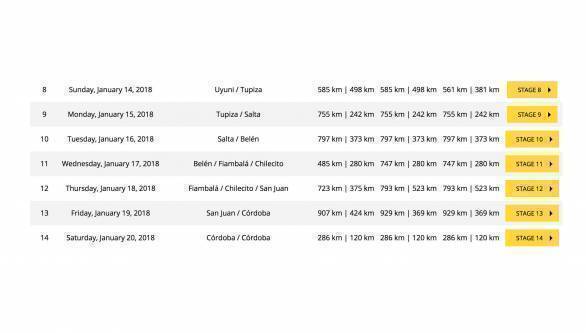 Argentina:
The 10th stage of the Dakar sees competitors head from Salta to Belen, braving the challenges of the dunes and a vast sandy plateau, eventually tackling a riverbed crossing at the end of the day's rallying. The eleventh stage of the rally sees competitors head from Belen to Fiambala and finally onto Chilecito. This is the stage that has been described by the Dakar's sporting director, Marc Coma, as the stage that will separate the men from the boys. He's said that if competitors hope to make it all the way to Cordoba, they will have to perform very well at this particular stage. The stage is meant to be particularly tricky, given the fact that high temperatures might result in the sand becoming less firm, which makes it even easier for vehicles to sink into the terrain. In the evening, the bikes and quads will stay at a separate bivouac, for the second marathon stage. The 12th stage of the rally sees competitors head from Fiambala and Chilecito to San Juan. This is another tricky stage, where the riders will have to be brave, handling the many twists and turns along the route. There's also the fact that the roadbook is extremely challenging at this point, which means that cars and trucks will have a tough time too. The 13th stage of the rally takes place between San Juan and Cordoba, where after sand dunes, competitors will have to tackle fesh fesh too. The 14th stage in Cordoba will also be the last stage of the event. The stage is reportedly also tremendously challenging, in order to ensure that the competitors have to be on high alert all through. The Dakar won't let up on the challenges even once, over the course of two weeks!