Heavy rains continue to disrupt the 2017 Dakar. The 492km competitive section of Stage 8 was shortened by 68km and split into two parts after a river on the route overflowed. There was also a landslide in the transport section which forced teams to take a 150km detour before they got to the night's halt at Salta, Argentina. 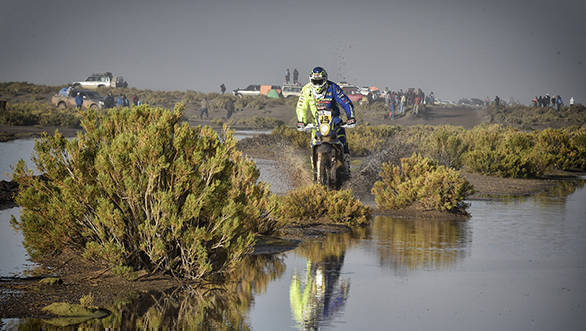 However, despite the challenging conditions, TVS Sherco Racing's Juan Pedrero Garcia managed to take 5th place in the stage after he finished six minutes behind the stage leader, Joan Barreda Bort. This pushed him up in the overall standings by two places to 20th. His team-mate, Adrien Metge, completed the stage in 4hr50m03s to take 25th place in the stage. This bumped him up three places overall to 38th position.