It's been a tough Dakar for Sherco TVS's KP Aravind. The Indian racer suffered a crash on Stage 1 of the event, when a slower rider cut across his path close to the finish line.The crash resulted in Aravind fracturing two bones in his left hand, leaving him in considerable pain early on in the rally. This meant that Aravind completed the second stage with great difficulty and ended the stage 127th. In the overall classification, the Indian rider has dropped to 125th. 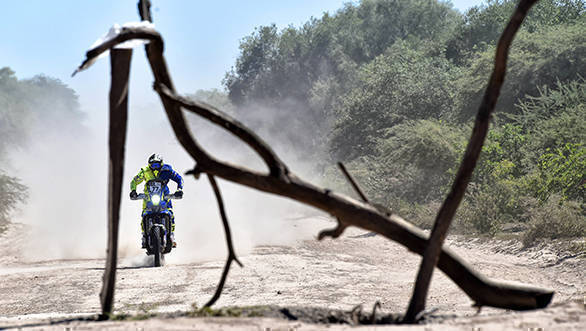 It was a comparatively better day for his team-mates. Juan Pedrero Garcia completed Stage 2 11th. This puts him 9th overall in the motorcycle category after two stages in the 2017 Dakar Rally.

Meanwhile, Adrien Metge finished the second stage of the Dakar 123rd, having incurred a 15 second time penalty. This put him down in 124th position overall in the bike category after two stages of the Dakar.

Meanwhile, Aravind KP has decided that he will continue the Dakar, riding through the pain that he is in, making it to the finish line at his first attempt at the event. We wish him luck.