Hero MotoSports Team Rally riders Joaquim Rodrigues and CS Santosh began the second week of Dakar 2017 on a strong note. Rodrigues finished Stage 7 at the 20th position after clocking the timed section in 2hr 19min 46sec. The Stage 7 was also the first part of the marathon stage which meant riders were not allowed access to service crews at the end of the day. This meant that he had to push but at the same time conserve the bike. Rodrigues, at the end of the stage, mentioned that he had made a few mistakes with his roadbook and had to follow the tracks of riders who were ahead of him. Rodrigues' skilful riding also helped him maintain his 11th position in the overall bike classification. He trails the leader by 1hr 23min 18sec. 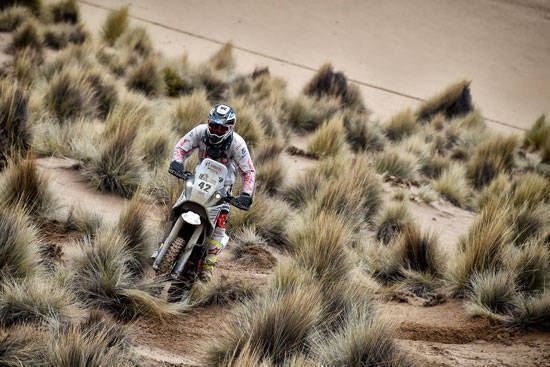 India's CS Santosh had a pretty successful Stage 7, as he managed to rise from 70th to 67th in the overall classification towards the end. He completed the timed section in 2hr 35min 14sec which saw him finish the stage in 38th position. He too made a few mistakes while correcting his roadbook to match the altered course.

He was riding without any navigation for the first 60-65km, after which the roadbook matched and he managed to increase his pace. He also managed to pass a few riders in the process of improving his time. Santosh had incurred a penalty during Stage 3 for missing a waypoint, and another penalty would have dealt a major blow to his Dakar 2017 campaign.

Stage 8 is the second part of the marathon stage which will see competitors cross into Salta, Argentina. This is also where they'll have access to assistance crews.