The stage from Jujuy to Uyuni was all set to be a navigational challenge. It was supposed to be the sort of stage that would catch out Dakar freshers. And it was probably on this stage that Peugeot's more experienced drivers thought that their less experienced team-mate Sebastien Loeb would struggle. But as it turned out, with the highly capable Daniel Elena by his side, Loeb managed to do the unthinkable. He went right ahead and won the tricky Stage 5 of the rally, as the Dakar moved from Argentina to Bolivia. 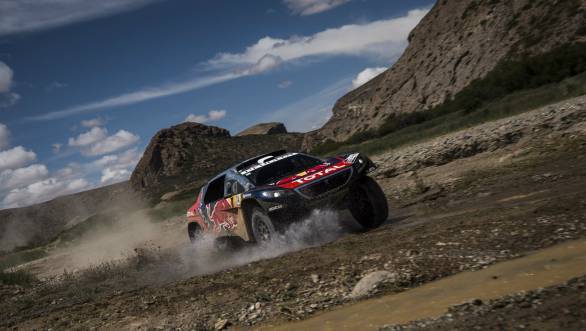 Loeb and Elena managed to stay at the head of the timing sheets all through the day, while their team-mates Sainz and Peterhansel, also piloting Peugeot 2008 DKR16s, traded second in the timing charts all through the stage. Ultimately it was Sainz who managed to finish second. While Loeb set a time of 3hr 32min 34sec, Sainz was just 22sec behind him. Third-place man Peterhansel was a further 2min 38sec behind. The best of the rest happened to be Mini's Nasser Al-Attiyah.

Loeb is currently 7min 48sec ahead of Stephane Peterhansel overall. His lead over Carlos Sainz is 13min 26sec. While Al-Attiyah, who'd confidently declared that he didn't believe Peugeot would last the distance of the Dakar, is now fourth overall and might just be forced to eat his words. Well, he does appear to be eating some Peugeot dust at the moment.