The Prologue stage of the Dakar that runs from Buenos Aires to Rosario is primarily meant to set the start order for the rally itself, although the timings do count towards the final result. And on this 11km long stretch, there was drama aplenty.

Unfortunately for Indian rider CS Santosh, who is listed on the Dakar timing sheets as Chunchunguppe Shivashankar, he ran into trouble astride his Suzuki 450 Rally. Santosh had a tough time navigating a river crossing, something that caught out more experienced riders too, including the likes of KTM's Laia Sainz. This means that the No.56 Suzuki that we're all rooting for will begin the first stage of the Dakar that heads from Rosario to Villa Carlos Paz, 127th. This information is from the official Dakar timing sheets, although Santosh did tweet saying that he'd be starting the Dakar "172 or something". 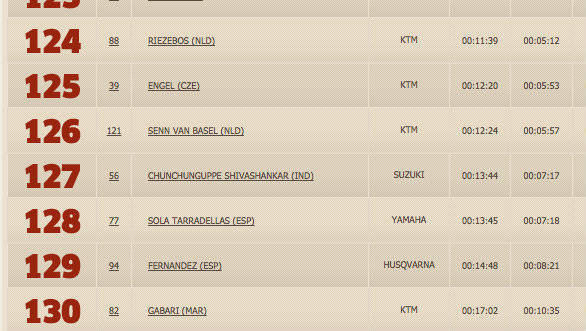 It is HRC's Joan Barreda Bort who will begin the rally first. The Prologue didn't go all the way to the end though. The riders in the motorcycle class and quad category made it across fine. However, after 59 of the 111 competitors in the cars category made it across, an accident brought an end to the proceedings. Guo Meiling, driving an X-Raid Mini, crashed into spectators 6.6km along the route, which meant the Prologue was suspended and medical teams were deployed at once to see to the injured.