There are only a handful of names in the Indian motorsport scene that most people recognise, and one of the more popular ones is CS Santosh. He is most famous for being the first Indian to participate and complete the Dakar Rally, in 2015. But that certainly isn't the be-all and end-all of his motorsport portfolio.

Santosh's motorcycling career kicked off when TVS Racing scouts picked him up after he finished second at a National Dirt Track Championship. With TVS sponsoring him, he won the championship in 2005, but that wasn't quite enough to quench his "thirst for adventure," as he put it. So he set sail across the ocean to participate in the Asian Motocross Championship in the Philippines. His first attempt resulted in a tenth place finish, while his next one landed him in fourth place. 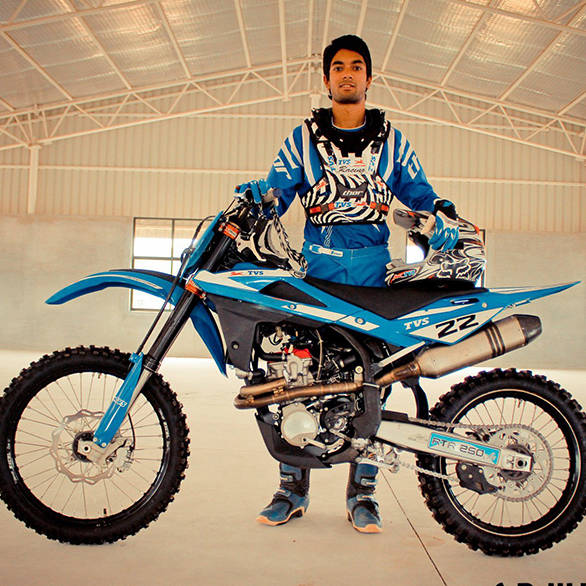 Following that, TVS Racing brought in an Australian rider to train the team, who Santosh followed all the way back to Australia in hopes of bettering his skills further. There he met Daniel McCoy, the Australian Supercross Champion, and spent weeks improving his off-road abilities. With that done, the next feat on his list was the Raid de Himalaya. So in 2012, he made his way up to the mountains and won one of the most gruelling rallies in India in his very first attempt. Crossing that off the list meant he had one more thing to tackle  the desert. In May 2013, he climbed onto a motorcycle to take on the first round of the World Cross Country Rally Championship (WCCRC) at Abu Dhabi with no testing whatsoever.

Crashes and injuries are a part of motorsport, just like scratches and dents are on a car in Mumbai. But the one Santosh suffered in this rally is not the kind that every racer faces  his fuel tank exploded, engulfing the bike in flames and leaving him with third degree burns. With three months out of the sun to recover, he only came back more determined to win the Cross Country Rally Championship. He got back in shape for 2014, won the Desert Storm, and hit the dunes in Dubai for four full days to get the hang of cross country rallying. 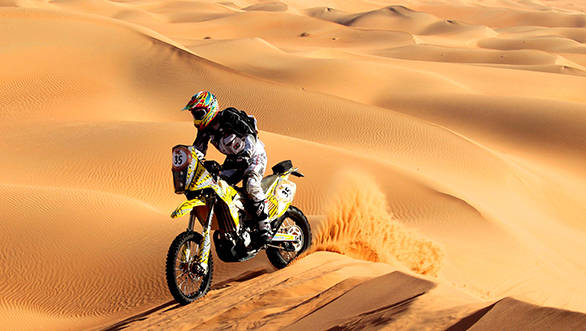 In the first round of the 2014 WCCRC at Abu Dhabi, Santosh finished tenth of 36 participants. The second round in Qatar was even better with an eight-place finish. In the final round, which is held in Morocco, he managed to finish 22nd, putting him ninth-overall in the championship standings. The Moroccan round of the WCCRC is an especially important event in the rally calendar because it serves as a precursor to the Dakar. It uses some of the old stages of the Paris-Dakar Rally, and everyone who was to take part in the upcoming Dakar would be there. Although he didn't quite admit to it then, everyone already knew what was next on Santosh's to-do list  to compete in the 2015 Dakar Rally. 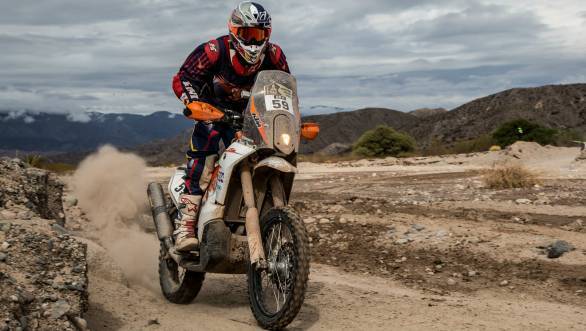 After struggling for a sponsorship, Santosh had help from his family that saw him make it to the Dakar. Once there, he spent his first few days understanding his motorcycle, learning the terrain and navigating it. By the end of stage one, he was 22minutes behind the leader and 85th of the 160 participating motorcyclists. By the halfway mark (Stage 6), Santosh made his way up to 52nd, and by Stage 8 he jumped up 10 places despite suffering a broken toe. At the end of the 2015 Dakar, Santosh achieved his dream of finishing the Dakar, with a commendable 36th overall.

With 2016 looming over the horizon, Santosh has found his way to South America to take on the Dakar rally all over again. Now that he's crossed "complete the Dakar" off his check list, the next thing to do is win it. We'll keep you updated on his progress at the event.