Sherco TVS Rally Factory Team's Alain Duclos continued his impressive performance in the 2015 Dakar Rally during the fifth stage of the event. The rider, who has several Dakar starts to his credit, moved steadily through the stage that led from Copiapo to Antofagasta on his No.14 RTR 450. By the first check point he was already ahead of rivals like Ruben Faria and continued to make steady progress through the stage. This ensured that he finished the stage ninth. A timing of 4hr 48min and 13sec put him 9min 57sec behind stage winner Marc Coma. This was despite the fact that his arms were bothering him and hurting as he tackled the terrain, but the confident rally raid rider that he is, Duclos says he plans to calmly progress further in the rally. 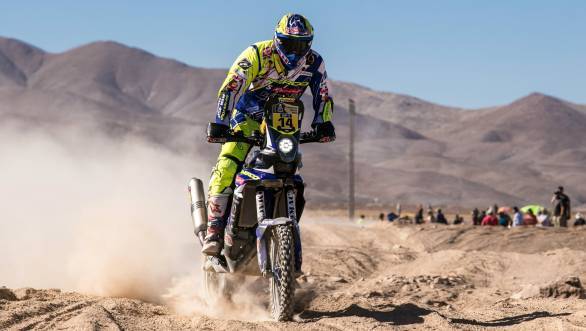 Duclos' extremely strong progress over the course of the rally also sees him currently ranked 11th overall in the motorcycle category of the event, 44min 12sec behind overall leader Joan Barreda Bort.

The other Sherco TVS RTR 450 has also been maintaining its rather steady performance in the rally. Fabien Planet managed to finish the stage 26th, 35 minutes behind the stage winner. However, this also puts him 23rd overall in the standings, seeing him more or less maintain his place in the rankings so far. Planet for one was pleased with his own performance, saying that the terrain that they had in the stage suited his style of riding. For now he is looking more comfortable in the Dakar, and is hoping to continue his strong performance.