CS Santosh appears to ride well with injury. Honestly, that's what comes to our mind given the sort of performance that the 31-year old Indian rider has managed to put in at his first ever attempt at the 2015 Dakar Rally. As in turned out, 15km into the sixth stage of the rally, Santosh's motorcycle got caught in some fesh fesh, and this, coupled with poor visibility, led him to fall. The motorcycle trapped his left leg and the result was a hairline fracture to the big toe of his left foot. Despite this setback the Kini Red Bull rider continued through the remaining 300-odd km of the stage. And after the rest day, Santosh has powered on steadily. 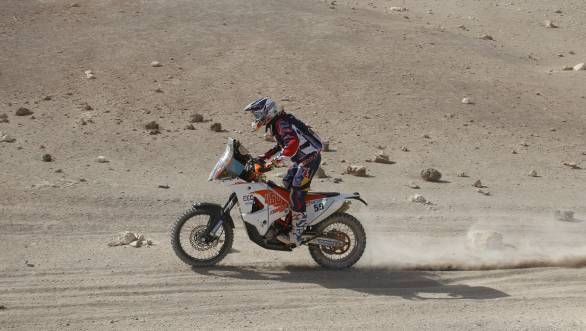 Santosh has best stage finish of 32nd in Stage 8 and is currently ranked 42nd overall.

For the marathon stage of the event, that ran from Uyuni to Iquique, along the Bolivian salt flats, the decision had been made that the stage would be terminated after 387km due to poor weather conditions. Well, turns out the 387km were all that was required for Chunchunguppe Shivashankar. In a stage that was one of great attrition, Santosh managed to finish 32nd, his best finish at the 2015 edition of the Dakar. It wasn't an easy run to the finish line for Santosh, who is also nursing impact to his left and right shoulders from two separate crashes. The 31-year old rider also ended up nearly being swept away in a river crossing and was soaked through and shivering upon his arrival at the bivouac according to the Hindustan Times.

Overall, Santosh currently stands 42nd in the motorcycle class of the event, 9hr 25min 43sec behind the leader Marc Coma.

Following a 51km connection stage, the motorcycle riders will now travel 450km from Iquique to Calama. 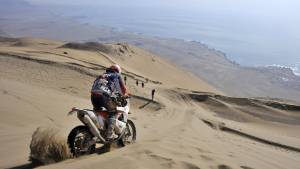 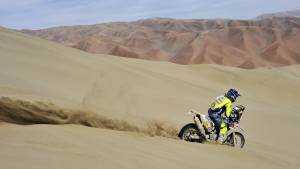 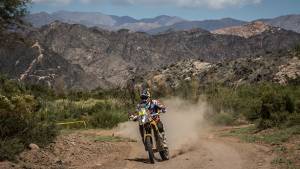