It's been a tough couple of days at the Dakar for CS Santosh, or Chunchunguppe Shivashankar as you'll find his name written out on the official entry list. Santosh had a fall during the second stage of the rally, and the pain caused by the injury to his shoulder has been getting in the way of riding to the limit. Add to that the fact that the painkillers made him a little drowsy and things got even more tough as the rally progressed for the first time into the Atacama desert when the Dakar contingent traveled from Chilecito to Copiapo. 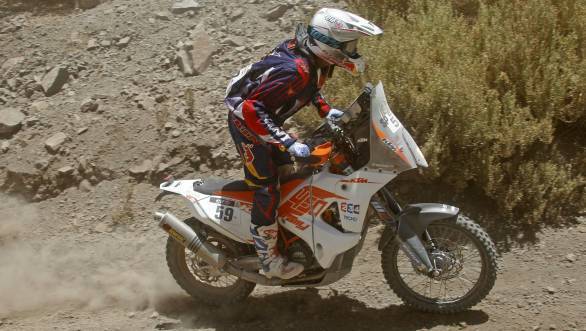 The Indian rider, astride a KTM Rally 450 for the Kini Red Bull Team, had a tough battle with the terrain and with himself. The terrain in terms of the fact that riding on the dunes, and the fesh-fesh or powdery sand was no easy task, nor was riding on the more rocky and stony sections of the course. And with himself, in terms of the fact that there was still a long way to go for him to be prepared and truly skilled enough to handle an event like the Dakar.

This didn't stop him from running fairly consistently though, and Santosh managed a stage time of 4 hours 22 minutes and 42 seconds, which was over 55 minutes behind stage leader Joan Barreda Bort. However, this saw Santosh ranked 58th in the stage. Overall, his ranking after the fourth stage of the Dakar, in the motorcycle category is 50th.