The grueling 2015 Dakar rally saw competitors travel over 625km of competitive stages in the second stage of the event that went from Villa Carlos Paz to San Juan. And while the stages were so difficult that more experienced riders were caught out, it proved to be a good day for Indian rider CS Santosh. 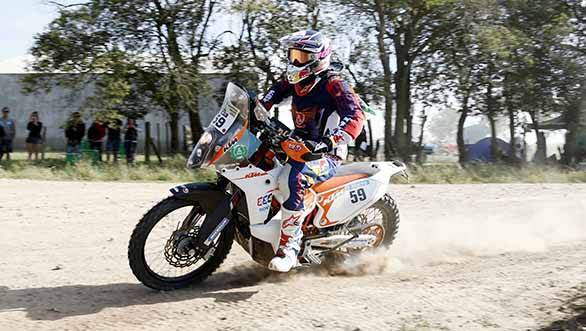 Santosh, whose name in the entry list is Chunchunguppe Shivashankar, managed to make up 35 places. While he had ended the first stage that went from Buenos Aires to Villa Carlos Paz 85th in the motorcycle category, astride his KTM 450 Rally, he managed to pick up the pace, avoid any sort of navigational errors and make it all the way to 50th in the motorcycle class.

While Santosh declared that he had managed to strike up a good rhythm over the first half of the stage, there were tricky moments too. The rider had a fall that caused a shoulder injury, but he pressed on in any case. Santosh also said that multiple falls over the course of the stage did break the flow of the ride and it was a bit of a struggle to eventually finish the rally.

The next stage will see riders head from San Juan to Chilecito with the motorcycle riders going over approximately 220km of competitive stages.