The death of well-known industrialist Cyrus Mistry has got people talking about road safety and social media is also full of posts urging everybody, including those seated at the back to wear seat belts. Given this, let me try and shed a little light on this accident.

CAUSE OF ACCIDENT - I believe the preliminary police report says that there was no defect in road engineering or the vehicle, and the driver was over speeding and trying to overtake from the left. The district collector Govind Bodke has said, "The vehicle driven by Anahita Pundole dashed on the parapet (side wall of the flyover) bridge near the Surya River". 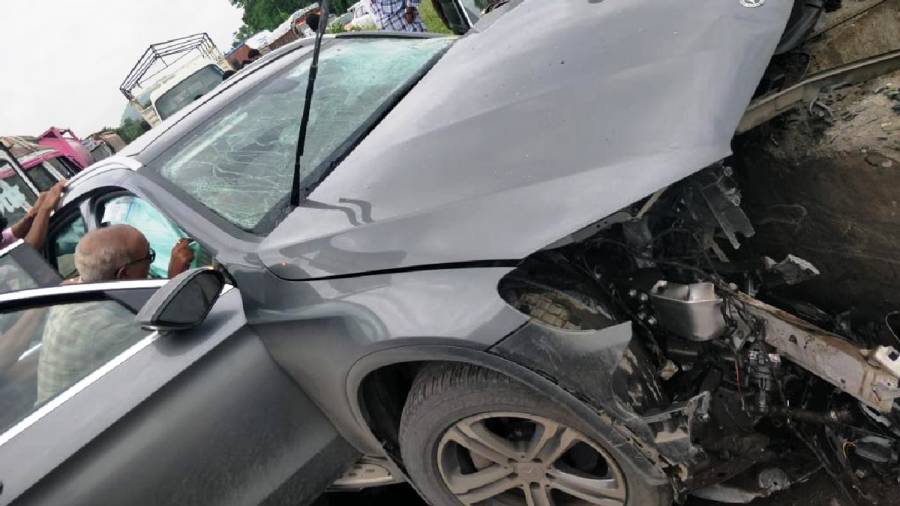 This photo was taken immediately after the accident. Note how people have been able to easily open the doors.

Having closely scrutinized some photos of the Mercedes-Benz GLC at the accident site, in my view there are few more realistic reasons for this accident. I know the Ahmedabad-Mumbai highway quite well and I think it is one of the most badly designed, crowded, and chaotic highways in our country. A major problem is the approach to bridges. There are hardly any prominent road markings or signboards that indicate one is approaching a bridge or bridges, as is frequently the case on this highway. As a result, you have no prior warning that the road ahead is bifurcating and narrowing, and you suddenly come upon the bridges, often just after taking a turn! I have seen many drivers getting confused and at the last minute having to suddenly swerve to go onto the bridge on left, or right. And if you don't get this emergency lane change maneuver right, then you go straight into the wall! 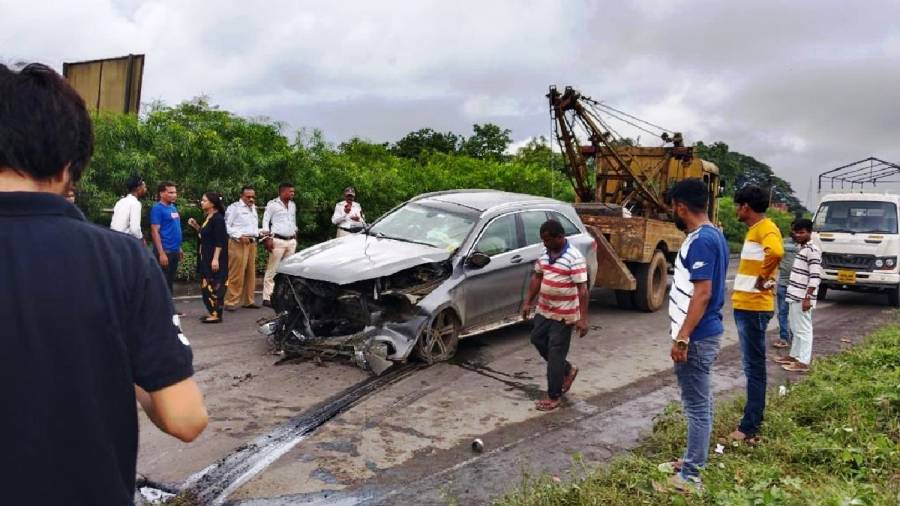 The GLC being towed away from the accident spot. Note how impact has been absorbed by the engine compartment. And all door frames are intact.

The collector has said that Anahita Pundole dashed into the parapet of the bridge. He does not say why? The police say the driver was over speeding and overtaking from left. The overtaking from left part, I think is right. Because this highway is used by lots of big trucks moving goods between Delhi and Mumbai and the truckers insist on occupying the right lane. And they are so adamant, that other vehicles have no option, but to dangerously overtake from the left. 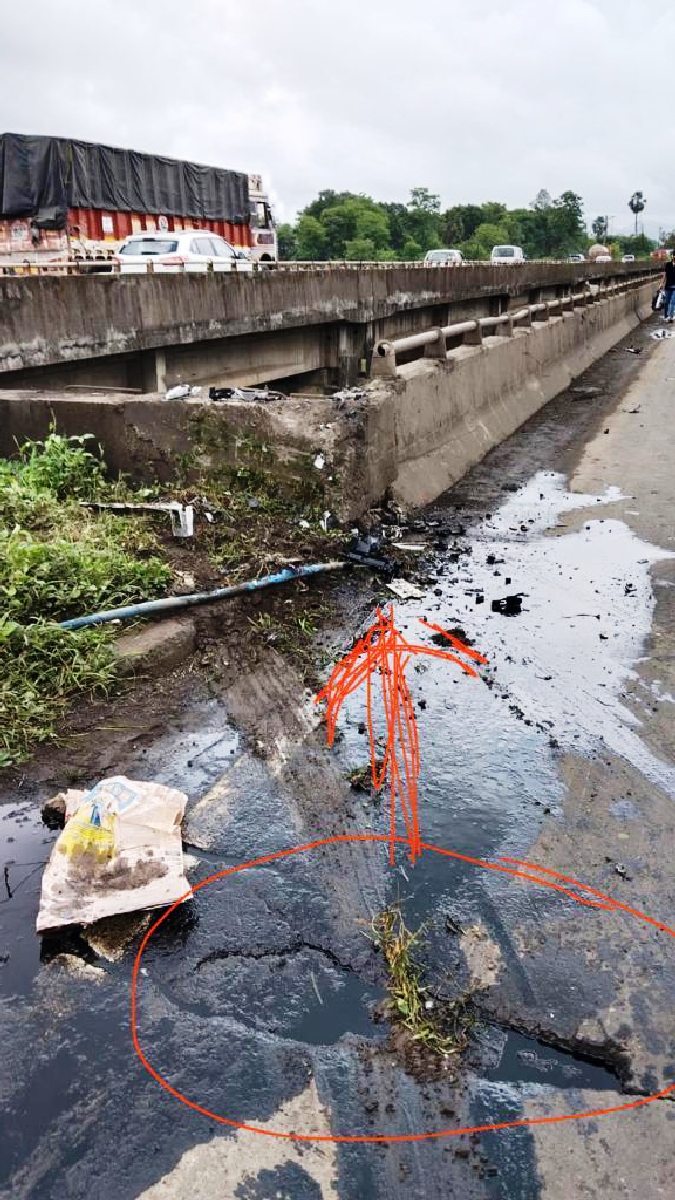 Tyre marks show the SUV swerved left and the driver has not applied the brakes. Note the adjacent bridge on a higher level.

This accident took place where there are two bridges (at different levels) alongside each other, and both are for traffic going in the same direction! From the photos it appears that Anahita Pundole suddenly swerved into the left side parapet of the bridge. In my opinion, a truck must have been blocking the right side lane and she tried to overtake from the left, as is the standard norm and practice on this highway. The photos also reveal no signs of braking and tyre marks just show that the GLC turned left. This only reinforces my belief, that she went left to overtake, and unexpectedly encountered the bridge's wall. 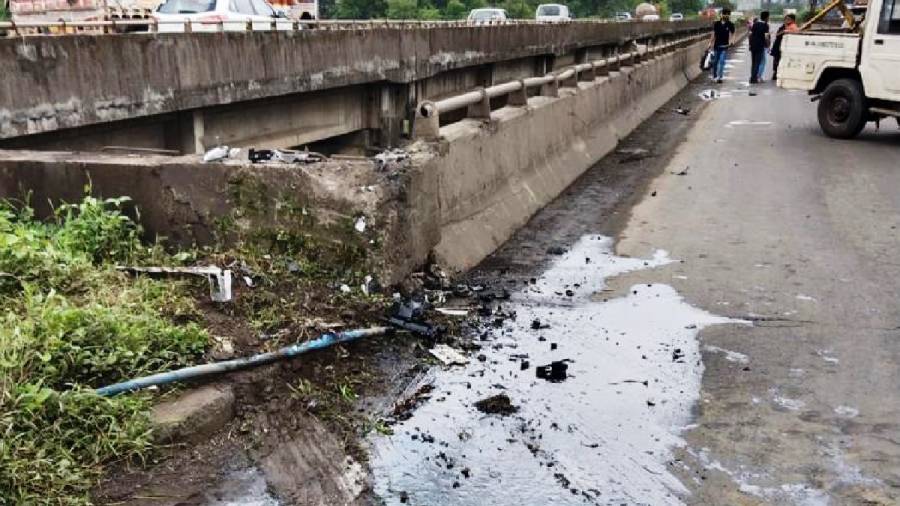 The wide highway suddenly narrows and without any warning you have to go onto the narrow bridge on the left, or the narrow bridge on right. Sadly, Anahita Pundole hit this parapet in between. Possibly while trying to overtake from left as a truck was blocking the path and her view.

Overtaking from the left is not permitted in our country as we are a right hand drive nation. And if the driver is forced to overtake from the left (as one is on this highway), then the driver who sits on the right, has a limited view of what's on the left, and that is when accidents such as this can occur. Whose fault is this, obviously the authorities and police are responsible for this. When it suits them, they talk of lane discipline, but why don't they strictly enforce the law and punish and fine the trucks and buses driving in the right lane, which is meant for overtaking.  If the right lane had been kept clear, which is the responsibility of the police, there possibly would have been no need for Anahita Pundole to turn left. And this accident may well not have happened.

As for the police's claim of over speeding, it has been reported by the highway traffic police itself, that to cover the distance of 25 kms between the Dapchari toll booth on the Maharashtra Gujarat Border and Charoti, the GLC took 30 minutes. This is an average speed of 50 kmph on a highway where the speed limit is 100 kmph. Were they over speeding - you decide? In my view, the police are guessing the speed of the vehicle according to the damage incurred. But what they are going by is the destruction to the crash or crumple zones of such cars- which are meant to collapse and disintegrate to absorb the impact.

POSSIBLE REASONS FOR DEATHS  - The preliminary reports of the police that I have been able to see so far say- "the dual airbags affixed to the driver and the front passenger seat can be seen during the preliminary examination of the car, but no such airbags are seen at the rear seat. Those seated in the rear seat weren't wearing their seat-belts". 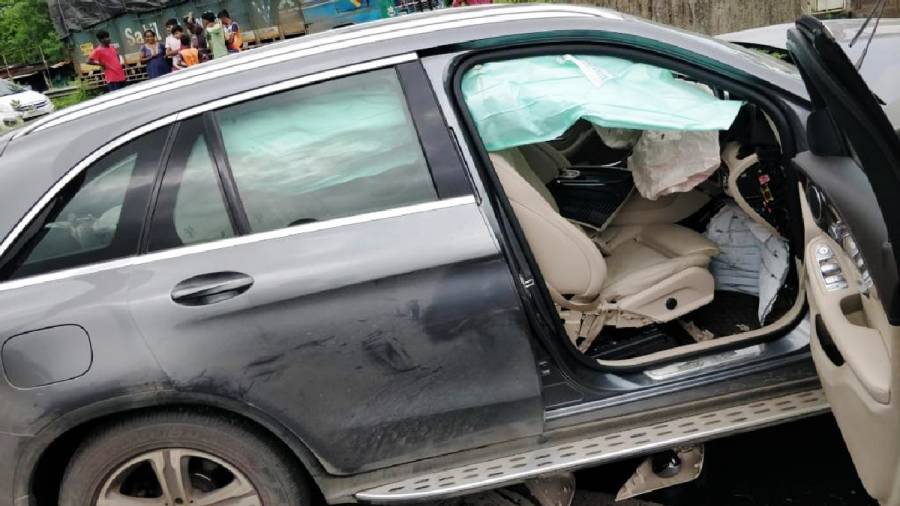 As per my knowledge, the Mercedes-Benz GLC comes with 7 airbags- and I will stick my neck out and say- all 7 did deploy. Let me list them- the driver and front passenger main frontal airbags, front 2 window airbags, and the driver's knee airbag. Totally 5. And if you look closely at the photo published here, you will see that on the inside of the rolled up rear window, the rear side curtain airbags have deployed. Total 7 airbags. All deployed.

So why are the police saying "No such airbags seen at the rear". The key word is "such". From what I can figure, our cops were looking for the frontal kind of airbags at the rear. But they will not find them, simply because the world's first ever rear seat frontal airbag was only introduced last year, in the new Mercedes-Benz S-Class! So however hard our police look, they won't detect them in any other car!

But what also cannot be denied is that both Cyrus Mistry and his friend Jehangir Pandole who were seated at the back, did get critical internal injuries to which they succumbed. And all available evidence clearly suggests that this was because both were not wearing seatbelts. As a result they got thrown around on impact and possibly hit their heads against the front seat headrests, seat backs, or even floor console. It's possible they even slammed into each other. 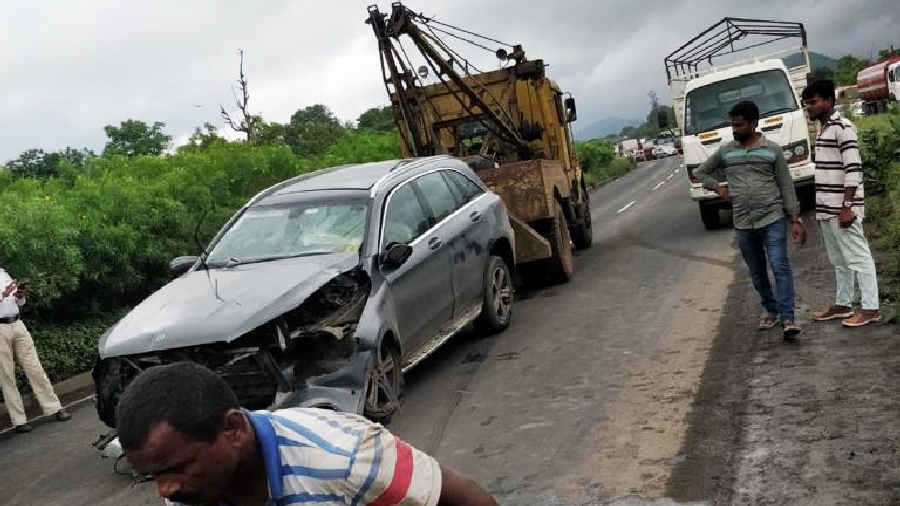 The safety features on the GLC worked and the structural integrity of the passenger compartment is intact as can be seen in this photo. Even the door windows are unbroken indicating they did not face the pressure of the impact.

Looking at the various photos and videos of the GLC circulating on social media, what can be observed is that after the accident people were able to open both the front and rear doors quite easily. This is the biggest indication that the various crumple zones built into the vehicle worked and while effectively absorbing and dissipating the force of the impact, they succeeded in isolating the passenger compartment and keeping its structural integrity intact. Yes, the cabin has not got crushed inwards and this is the reason the doors have not jammed.

Another thing that I noticed is that there is no real sign of blood anywhere. This shows that no sharp objects pierced or cut any of the occupants. All this is clearly to the credit of the Mercedes-Benz GLC and its designers and engineers. Please note that the driver Dr. Anahita Pandole and her husband Darius Pandole, who was seated beside her, were wearing seatbelts and both though severely injured, have survived the accident.

But what went wrong is that both rear seat passengers, who were not wearing seatbelts, did not survive. Sadly, this is the common practice in our country and few people realize that there is a strong bond between a seatbelt and airbag. Seatbelts provide the primary protection and airbags are the supplementary system providing cushioning. Airbags work effectively only when seatbelts are in use. They are not replacements for seatbelts, which unfortunately is what many people mistakenly believe.

While the deaths of Cyrus Mistry and Jehangir Pandole are extremely tragic, I hope and pray that the importance of wearing seatbelts, even if seated at the back gets communicated. Many of our roads are "Highways to Hell" and instead of passing the buck, our authorities also really need to seriously do something about improving our road design and quality, driving discipline and training, and so many other things. It's really sad how many valuable lives we lose in road accidents every year. And how little we do about it. 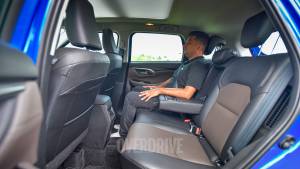