It is official. CS Santosh will become the first Indian to compete in the Dakar Rally when he pilots a KTM 450 Rally for the Kini Red Bull team at the 2015 edition of the event. As OVERDRIVE had revealed earlier this month, Santosh will be backed by the PB Racing group from Pune. [UPDATE: We have since been informed that Santosh received no backing from the PB Racing group and made it to the Dakar on his own steam]. One advantage that he will have at the Dakar, even though this will be his first attempt at a rally raid of such a huge scale, is that his mechanic for the event will be Melot Benjamin, the same man who has wielded the spanner on the rally raid expert Ruben Faria's motorcycle in past editions of the Dakar.

In the run up to his Dakar preparation, Santosh has been training hard, competing in the World Cross Country Rally Championship, with good results at Abu Dhabi and Qatar, followed by a challenging outing at Morocco. However, with the extreme stages at Morocco and the navigational challenges it throws up, the event has proved to be the ideal precursor to the Dakar. 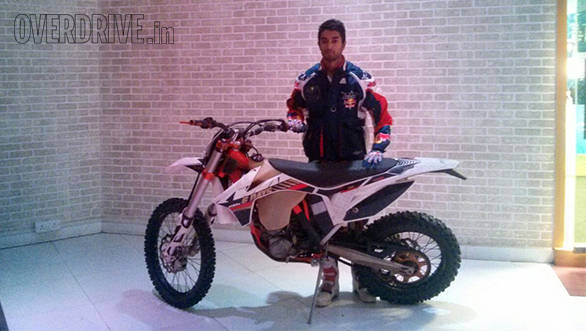 While Santosh was initially supposed to train with Ruben Faria in the run up to the 2015 Dakar, that hasn't happened. "This year my way of dealing with the Dakar will be getting my road book right, keeping things simple and also trying to make sure I go into each day with a clear head and analyse the event and learn as I go along."

"I'm thrilled to be the first Indian to be at Dakar. From my crash at Abu Dhabi last year, which left me with third degree burns, to standing here right now, it's been an amazing journey. Last two years have been rigorous training for me with my team at Kini Red Bull and with their support moving forward, things look exciting the real journey starts from here," said Santosh.