Cool concept cars that were showcased in 2016

As the year comes to an end, we take a look at some of the interesting concepts that were showcased in 2016. While some of them will make it into production next year, the rest of the cars might arrive in the next few years. It is evident that car manufacturers are looking at alternative fuel sources as well as autonomous driving technology for their-next generation offerings. Here is our list of cool concepts of 2016. 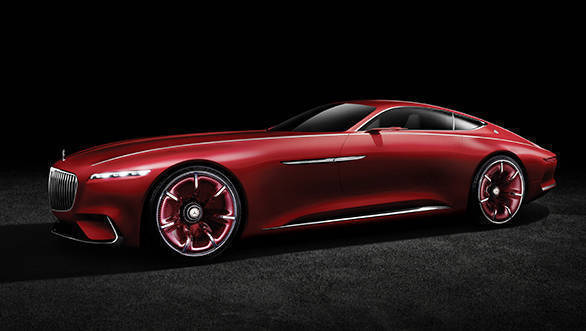 Maybach's roots go way back to 1909 when it was founded by Wilhelm Maybach and his son. The same was then acquired by Daimler-Benz and was the German auto manufacturer's answer to the likes of Rolls-Royce. This year, the Vision Mercedes-Maybach 6 made its way at the Pebble Beach Concours d'Elegance, one of the most elite car events. The Mercedes-Maybach 6 might not translate into anything in the production form but has enough visual drama to be your bedroom wallpaper. It measures nearly 6 metres in length and is even longer than the S-Class Coupe. There is a totally different world inside with the entire windscreen acting as the head-up display. This pure electric concept features a 750PS motor. It can do 100kmph in under four seconds and can reach a top speed of 250kmph. More details on the Vision Maybach 6 here. 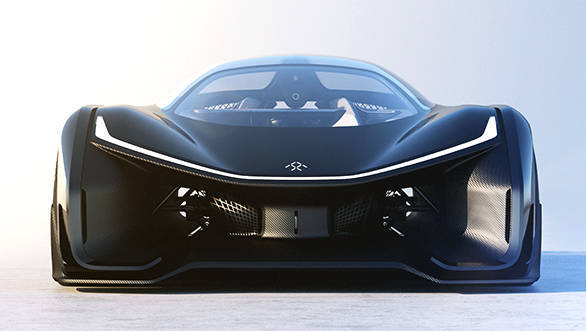 Faraday Future is a two-year-old American start-up that plans to make electric vehicles. The company released a set of teasers before bringing out the actual FFZero1 concept at the Consumer Electronic Show (CES). Designed as a pure electric single-seater sportscar, the FFZero1 will be a limited production model. It will be built on the Variable Platform Architecture (VPA), a modular structure that will underpin all its portfolio vehicles. The company states that the sedans, SUVs, and even high-performance race vehicles can be spawned on this platform. According to the speculation mills, the FFZero1 will come with a 1,000PS motor and will be capable enough to reach 100kmph in less than three seconds. Read about the Faraday Future FFZero1 here. 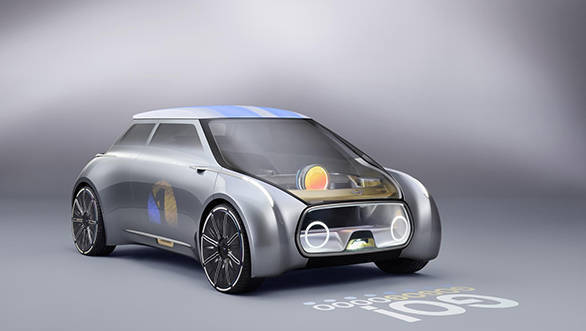 To celebrate the 100th birthday of the BMW Group, its subsidiaries Rolls-Royce and Mini have unveiled the 103EX and the Vision Next 100 Concept, a taste of how vehicles of these brands will look in the next century. Both these vehicles are focused on autonomous driving with the Rolls-Royce not even getting a place for a driver. The concept gets an elongated windscreen on the front with round headlamps. At the rear, it gets a single horizontal bar for the tail lamp cluster accompanied with a spoiler. On the inside, it gets a two-pedal assembly and display of information relies on augmented reality on a series of high-definition monitors. Details on the Mini Vision Next 100 concept here. 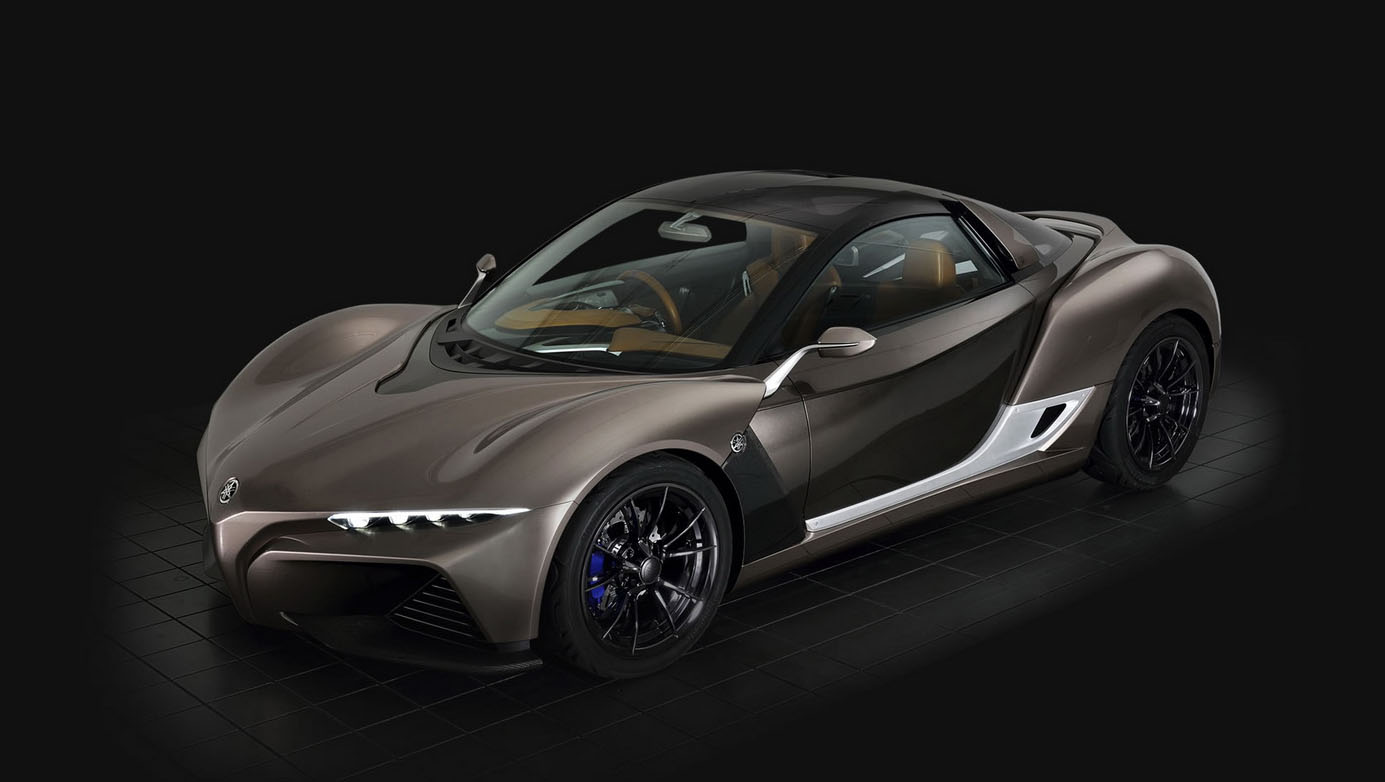 Yamaha's potential of making ultimate superbikes is known to all. What happens when all of that is put in a car? The result is the Yamaha Sports Ride Coupe. In addition to the robot piloting a motorcycle at 200kmph that was shown at the Tokyo Motor Show this year, Yamaha surprised the audiences by getting the Sports Ride Coupe. This was the second time that Yamaha had attempted a four-wheeler offering, but the Sports Ride Coupe looked far more impressive. It has been designed by Gordon Murray Design in Surrey, England and will have a front-engined rear-wheel drive configuration. It is believed that the Sports Ride Coupe will be powered by a 1.5-litre motor. GMD states that the SRC will be a mass-production sportscar incorporating the latest tech along with carbon fibre. All of that sounds too promising, doesn't it? 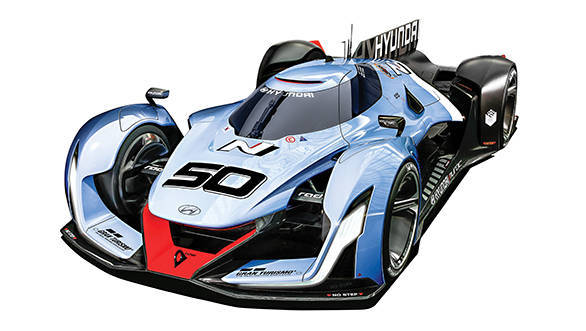 Just look at it and honestly you will have no words to describe the Hyundai N2025 Vision Gran Turismo. Hyundai has already set a high benchmark with the launch of the new-gen Elantra and the Tucson. But with the N2025, the automaker has stepped in the next generation of automobiles. The Hyundai N2025 looks all ready to participate in the grilling 24 Hours of Le Mans prototype class. It boasts a hydrogen fuel cell powertrain capable of generating an impressive 884PS using an additional super capacitor system. It has been developed exclusively for the Gran Turismo racing video game franchise. Hyundai debuted its N2025 Vision Gran Turismo Concept for the North American market at the Los Angeles Auto Show and then also showcased it at the 2016 Auto Expo in India. Details on the Hyundai N division here. 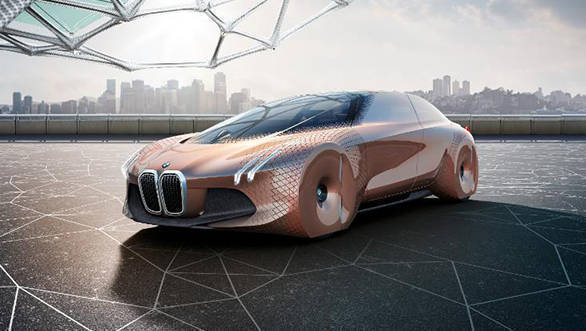 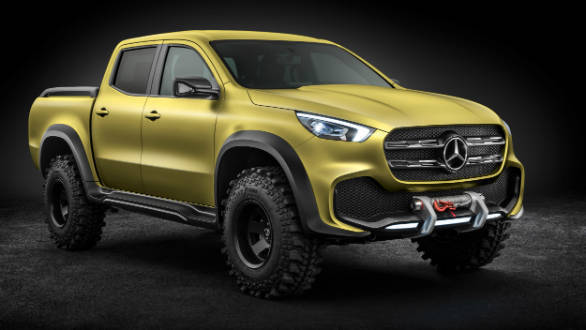 The Mercedes Benz X-Class Concept previews the brand's upcoming pick-up truck. The company unveiled two variants of the X-Cass Concept  Powerful Adventurer and Stylish Explorer. Mercedes says that its pick-up bears the traditional traits of a pick-up - strong, functional, tough and with the capability of going off-road. It is also the first true premium pick-up, claims Mercedes. As we've said before, the X-Class Concept is based on the same platform that underpins the Nissan Navara and the Renault Alaskan. Get all details about the Mercedes Benz X-Class here. 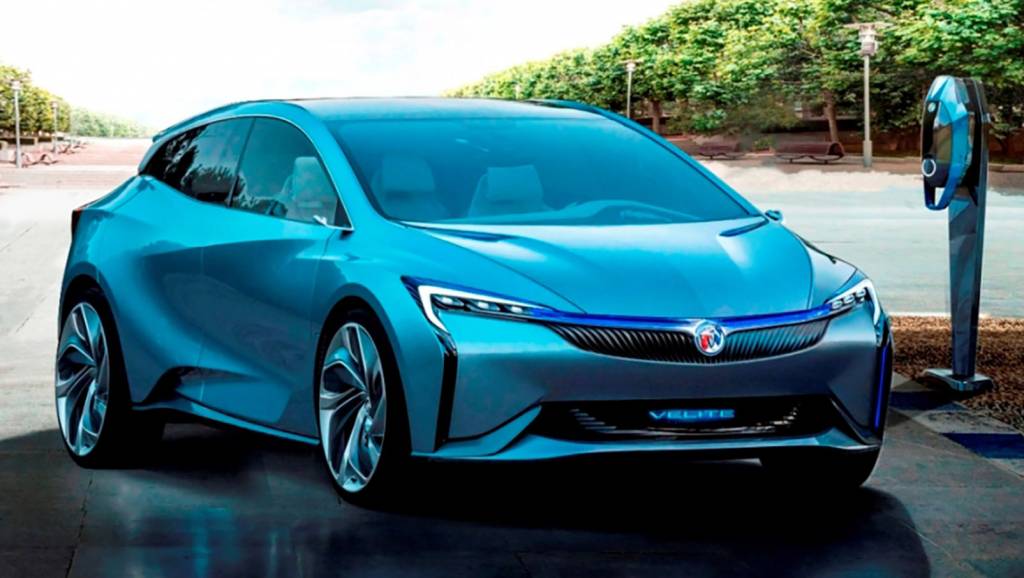 While Buick showcased the Velite concept at the 2004 New York Auto Show, the company revealed a new Velite Concept at the 2016 Guangzhou Auto Show. The new iteration looks far more appealing than the original. The fluidic theme is evident on all the profiles of the Buick Velite. The sloping roofline, sharp creases on the side and also the compact nose section do remind of the BMW i Series of cars. About the powertrain options, Buick has not revealed any substantial information about the Velite concept except for that it will be a plug-in hybrid with a modular lithium-ion battery. More details are expected to surface next year. 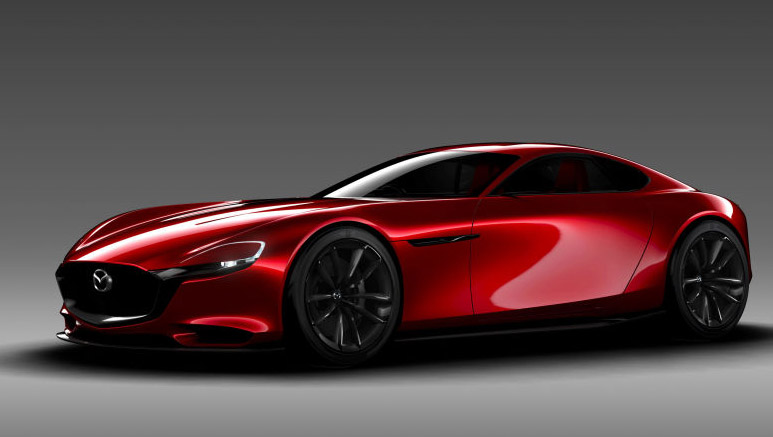 The Mazda RX-Vision is one gorgeous concept that was showcased at the Tokyo Motor Show. This one too aims to be a front-engine, rear-wheel drive sportscar. The concept comes with Mazda's Kodo design language and will feature the Skyactiv-R rotary engine. Yes, that's true. Mazda was the only automaker to mass-produce the rotary engine. The company doesn't presently offer rotary engine technology in its existing offerings but has always continued its research in that direction. The only car to come with a rotary motor was the RX-8 but then that was discontinued in 2012. The reason for Mazda halting its rotary motor plans was lower performance, efficiency and reliability. All of which, as claimed by Mazda, have been worked on for its new-generation offerings. At the time of the showcase, Mazda stated that for the RX-Vision it plans "to shave away all but the essentials" which means this will one lightweight offering and will be all about performance. This might be Mazda's answer to Chevrolet Camaro and Ford Mustang. 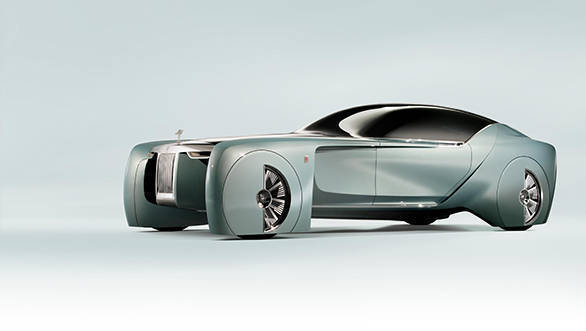 Measuring 5.9m in length, the Rolls Royce Vision Next 100 is about the same length as the Phantom. Even though the design is highly futuristic, one can instantly recognise the car by the vertical Rolls-Royce nose. The body work almost completely circumscribes the wheel, making an impression that the car is floating on air. While the front end is designed to look more royal, the rear end contradictingly features a sloping roof line and a squeezed rear end, giving it a sporty appeal. Rolls-Royce points out four key areas which they aim to address for the customers to have a better experience in the near future. The first being the Personal Vision strategy where the company plans to create a chassis of the future which will be hand built and powered by a zero-emission powertrain. The manufacturer will enable customers to involve themselves more in the design, shape and size of their personal Rolls-Royce vision. More details on the Rolls-Royce Vision Next 100 here. 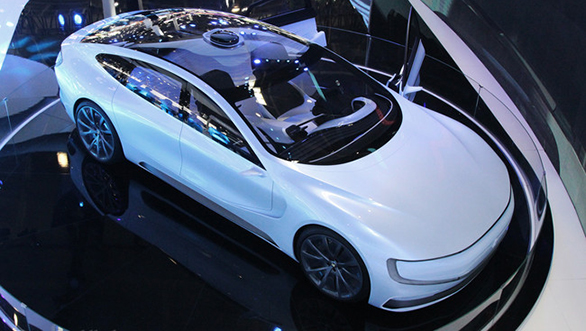 LeSEE, LeEco calls it, will be the company's first foray into automobiles and will be developed by its recently opened automobile division, called LeAuto. The division was created to help Aston Martin with its RapidE. The 'SEE' in LeSEE stands for 'Super Electric Ecosystem', suggesting it will be a performance-oriented electric car. The company has announced that the car in its current form is good for 209kmph. We expect a sub-4 second sprint to a 100kmph and a top whack of around 250kmph in its production form. The battery pack is placed in the floor of the car, giving it a low centre of gravity for nippy handling. The interiors are a futuristic affair with an augmented reality windscreen, morphing seats, and cameras instead of side mirrors. The car is also aimed to be semi-autonomous, making it a direct competitor to Tesla and Google, as well as other manufacturers going down this path. Details about the LeSEE concept here. 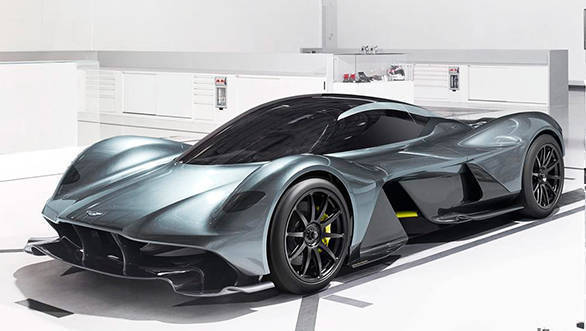 The AM-RB 001 will rival the likes of the LaFerrari and McLaren P1, and is being designed by a team headed by Marek Reichman, design head, Aston Martin along with Adrian Newey, chief technical officer, Red Bull Racing. The production form of this hypercar will closely resemble the same, states Reichman. The company is presently working on tweaking the design further to improve the aerodynamics as well as improve the cooling system. The engine displacement will be either a 6.0-litre or a 7-litre V12 churning out 1,000PS and will peak at 9,500rpm. This motor will be mated to a single-clutch transmission developed by Xtrac, the same company that provides gearbox for Aston Martin racecars. It will reach a claimed max speed of over 400kmph. Details about the AM-RB 001 here. 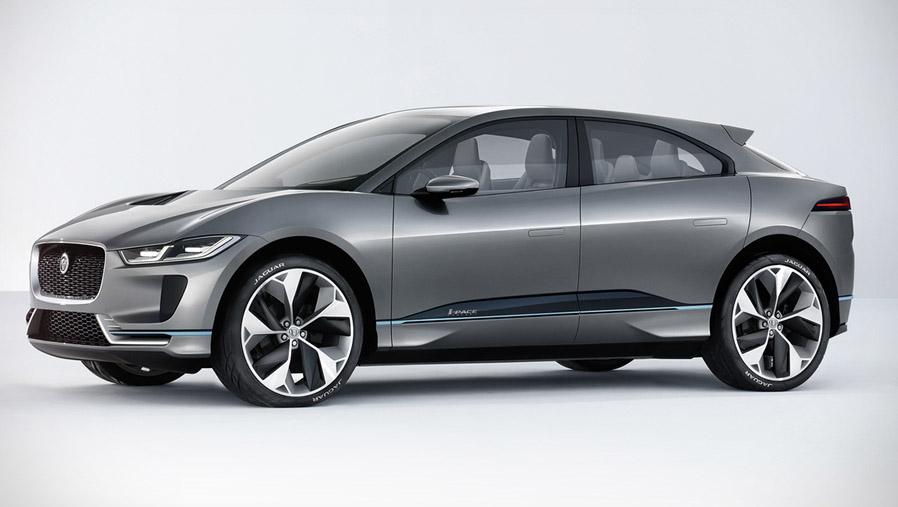 The Jaguar I-Pace Concept is its first all-electric performance SUV. It was revealed to a select set of guests, via a virtual reality experience on social media platforms. The pre-production form of the I-Pace will be showcased to the entire world in 2017, while the production version is set to debut in 2018. The design bears a few cues from the F-Pace. However, the I-Pace Concept is smaller in dimensions than other SUVs in its class, says Jaguar. The total length is 4,680mm, but the absence of an engine and the cab-forward design have generated more room than its competitors. The I-Pace is powered by two electric motors, one on the front and one on the rear, giving it all-wheel drive (AWD) capability. The combined output from these motors is an impressive 400PS and 700Nm. Details about the Jaguar I-Pace here. 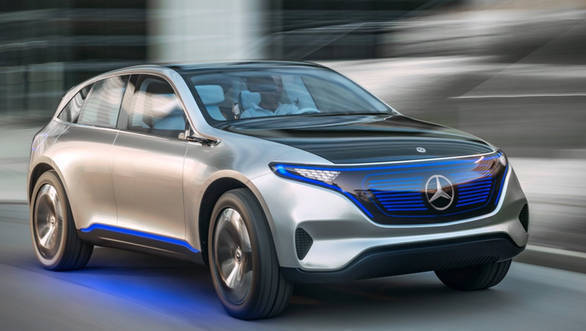 The Mercedes-Benz Generation EQ is a crossover-bodied vehicle that has the typical elements of new-generation MB concepts like flashy blue lights, clean and smooth bodywork, reflective panels for what otherwise would be glass elements on a production car, and of course tons of sci-fi looking lighting and infotainment systems. So the EQ concept certainly looks far from being ready for mass production. It comprises of a purpose-built 70kWh battery system mated to electric motors that are capable of delivering over 400PS of power, 700Nm of torque and over 600km of driving range. These underpinnings are scalable to produce anything from an entry-level hatchback to an SUV or an S-Class paralleling limo. Details about the Mercedes-Benz Generation EQ Crossover. 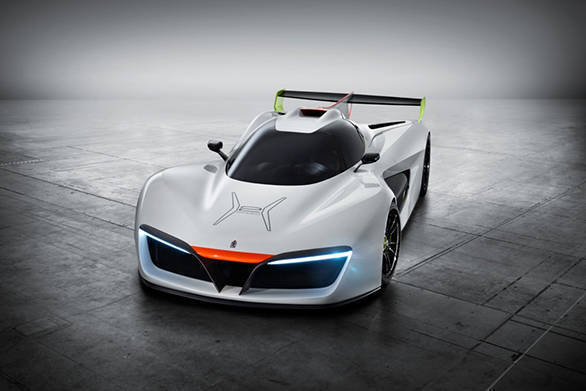 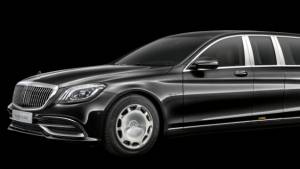 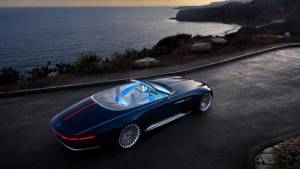 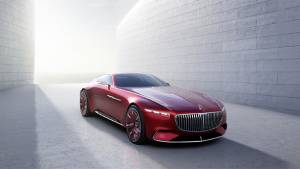