Alma Motors Private Limited, an MG Group Company in association with MAN trucks has released a new luxury coach called the Mammoth at Busworld 2015. The three day event held from April 28 to 30, 2015 at the NSE Grounds at Goregaon in Mumbai is an international exhibition for bus and coach makers.

The Mammoth is based on a MAN chassis that is built using high strength steel to tackle the challenging Indian terrain, says the company.

The company adds that the bus also boasts numerous safety features built by MAN. The chassis, for instance, houses the fuel tank in the centre that mitigates the risk of fire in the event of a crash. The brakes come with ABS. There is also MAN's patented Engine Exhaust Valve Brake along with the Hydrodynamic Retarder that results in smooth and effective braking, says the company. 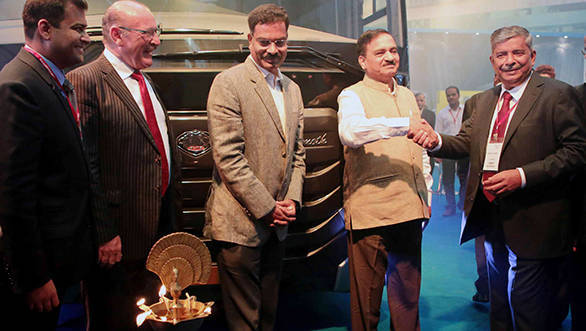 To keep the low floor from scraping over the rough Indian roads, there is a ride height increase button that lifts the body by 50mm. Augmenting the standard cruise control is the downhill cruise control. According to the MG Group, the system helps maintain a constant speed without taxing the brakes.

The Mammoth is powered by a six-cylinder diesel engine that's supplied by MAN. The bus also features well appointed interiors with features such as personalised reading lamps along with mobile and USB charging ports.

The company also highlighted the safety features of the Mammoth. The bus comes with eight emergency exits, seat belts for every passenger and a driver-passenger barrier that protects the passengers in the event of a front end collision.

The Mammoth also come with another safety feature that the company calls EM-Secure. The system demarcates the emergency exit area that is free from any obstruction. A manually operated stairway can then be deployed to exit the coach.

Speaking at the launch, Anil Kamat, executive director, MG Group said, "Mammoth is a landmark achievement for the MG Group in India. The introduction of this luxury coach is even more special as it is designed and developed in India and has global technology. The coach has been developed keeping in mind the evolving customer, passenger and driver needs in India. Mammoth offers a range of features to help improve fuel efficiency, drive comfort and overall passenger experience."