The second Volkswagen Polo R Cup race on any given race weekend usually ends up being more exciting than the first. This, because of the reverse grid format that is followed, where the first eight finishers of Race 1 end up starting in reverse order in the second race. And the second race of Round 1 of the Polo Cup at the Kari Motor Speedway in Coimbatore was no different. The reverse grid saw Angad Singh Matharoo, winner in Race 1, start eighth on the grid, with Bonnie Thomas starting on pole. Yes, that's the very same Bonnie Thomas who was Lohitt Urs' navigator through the 2013 season of the Indian National Rally Championship and is currently competing in the Masters Category of the 2014 Polo R Cup. 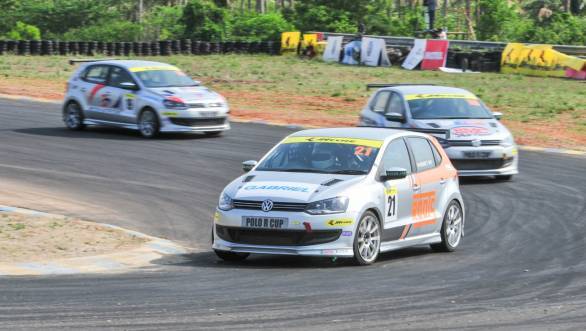 When the five red lights went out at the Kari Motor Speedway, Thomas managed a good lead into the first corner, followed by the number 18 car of Anindith Reddy, with Ishaan Dodhiwala third. However there were a couple of skirmishes up and down the order, with a car going off at the apex of Turn 6. Amlandeep Bora had managed to get over the tyre barriers at that point in the race track, and with the car beached right at the apex of the turn, and with an oil spill at the track, the Safety Car needed to be brought out, which eventually happened three laps after the crash. Where there should have been double yellow flags waved, especially on the start-finish straight before the SC picked up the leaders, there weren't any. Some prodding produced one yellow flag, and fortunately there were no mishaps before the cars were picked up in order. There was also the slightly worrying matter of a marshal who had positioned himself at the apex, waving people by the abandoned car, until a recovery vehicle finally pulled the car away.

The race restarted with Bonnie Thomas still in the lead and Anindith second, while Ishan dropped down the order. Anshul Shah who had a strong performance during the first race had managed to work his way to third place, which he tried defending from Race 1 winner, Angad Singh Matharoo. Matharoo, now in his fourth season of the Polo R Cup, however, could not be kept behind and took position from Shah. He then set about closing the gap to Anindith and eventually passing him for second place. Then it was a matter of chasing down Thomas in an attempt to take two wins of two races that weekend. And while he did try hard to move into first place, he wasn't able to get the better of Thomas who crossed the finish line first as the chequered flag fell. Matharoo finished second, with Anindith third. Karminder Pal Singh, who had finished Race 1 first on the grid, before incurring a 30 second penalty took fourth spot. While Karthik Tharani Singh, who started last on the grid, after a DNF in Race 1, finished an impressive fifth.

Angad Singh Matharoo now leads the championship standings with a total of 54 points, with Bonnie Thomas second with 43 points and Anindith Reddy third with 35 points.

The second round of the Volkswagen Polo R Cup will be held at the Kari Motor Speedway on July 12 and 13.