BMW 1 Series to be launched in India in September

BMW will be launching its smallest offering for the Indian market, the 1 Series hatchback next month.The launch, on September 3, will allow BMW to reach out to a much wider audience. This has been made possible thanks to a carefully prepared strategy to assemble the 1 Series at their plant in Chennai. While competitors Mercedes-Benz have gone down the CBU route with the A-Class, BMW will ensure a more affordable premium hatchback by locally manufacturing the car.

So what is the 1 Series?

The 1 Series is BMWs smallest passenger car available globally in either 3-door or 5-door versions. In India, we will have access to just the 5-door hatchback. Internally designated the F20, the 1 Series has been around since 2004, but it's only last year that BMW revealed plans to offer it to the Indian market.What is being offered is the latest or rather the second generation hatchback that has been improved in several areas.

On the cosmetic front the 1 Series isn't a fantastic looking car, the A-Class from Mercedes-Benz is a whole lot more pleasing to the senses. Yet the 1 Series continues to carry forward the new BMW design language seen more recently in the 6-Series Gran Coupe and the 3, 5 and 7-series sedans. The 1 Series possesses a strong character and it would be hard to ignore this car. It's taut, lean and toned surfaces are par for the course and bear little similarity to the other cars in the BMW range. For one its kidney grille is narrower than what you see in the 3 Series and the new headlamps with its white LED highlights make it stand out distinctly. 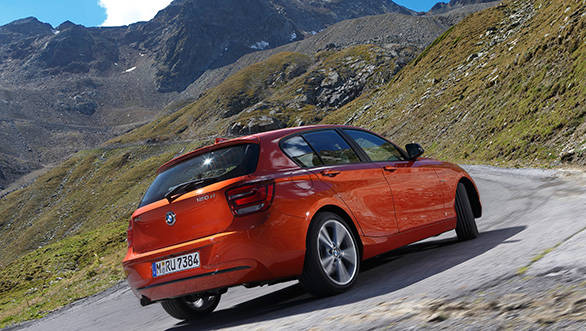 Internally designated the F20, the 1 Series has been around since 2004

The 1 Series at around 4324mm in length is around 300mm shorter than the 3 Series and around 50mm narrower too. Height, however, is almost the same. Now the one grouse with the 3 Series was interior space, and the 1 Series will be challenged by similar issues. The cabin is, however, richly appointed, and the versions coming to India will have a wealth of features and premium quality materials to appeal to the masses. The dashboard looks significantly fresh, though certain components may feel familiar. What's new in the cabin is the area around the navigation unit, which is now displayed in a larger screen and some of the control dials. A few accents, especially the shiny bits around the steering wheel, brighten up the interior. 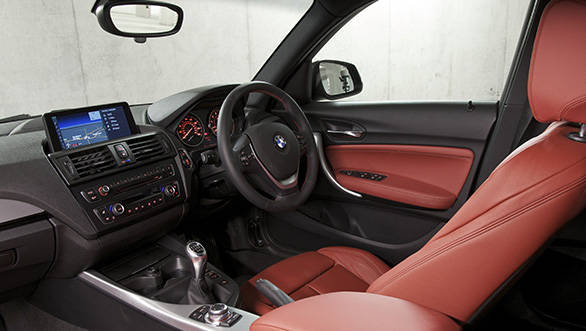 What's new in the cabin is the area around the navigation unit, which is now displayed in a larger screen and some of the control dials

The boot is fairly large offering from 360-1,200 litres of space. Maximum boot space is achieved by folding down the rear seats in either a standard 60:40 split or though an optional 40:20:40 split.

Under the hood, the 1 Series will offer a choice of either petrol or Diesel engines, no marks for guessing which will be more popular. In petrol, BMW will offer the middle of the range 116i, which has a 1.6-litre turbocharged engine delivering 136PS of max power at 4400rpm with 220Nm of torque from 1350rpm all the way up to 4300rpm. This engine jointly developed by BMW and Peugeot is a compact 4-cylinder petrol code named the N13B16 and is also used by the Mini Cooper S. This is a fairly clever and technically advanced petrol engine using a twin-scroll turbocharger, variable valve lift and variable valve timing and high precision injection.

The diesel being offered in the Indian market is a BMW efficient dynamics edition turbocharged diesel dubbed the N47D20. Displacing 1995cc it uses a variable geometry twin scroll turbocharger and a 16.5:1 compression ratio to deliver 143PS of max power at 4000rpm with 320Nm of max torque between 1750-2500rpm. This diesel has been heavily worked on to reduce internal friction and, thanks to next generation common rail direct injection with magnetic-valve injectors, is tuned to be highly efficient.

Both engines will deliver their charge to the rear wheels through a ZF 8-speed automatic transmission, allowing the 116i to touch a 100kmph
in around 8.7seconds and the 118d to do the same in a quicker 8.6 seconds. The transmission offers a choice of 4 driving modes: comfort, sport, sport plus and Eco Pro. The last mode manages transmission shift patterns, the power delivered to onboard electric components and accelerator pedal responses to improve efficiency.

The entire car is suspended on an aluminum-rich multi-link suspension with a 50:50 weight bias between the front and rear wheels. The power steering is electro-mechanically assisted with speed-dependent power assist to further boost fuel efficiency. The 1 Series also offers a host of safety and driving aids that are common to every other BMW passenger car available in India.

We'll have a first drive report up shortly.