UM Motors is a Miami-based motorcycle company that is entering India after having unveiled a range of products at the 2014 Auto Expo. The company normally operates using its Chinese manufacturing and American design and development capabilities in most markets. But for the Indian market, UM Motors tied up with Lohia Automobiles, an announcement it made back in March 2015. The joint venture also intended to have manufacturing capability - 1 lakh units per annum to start with - in place in Kashipur, Uttarakhand with a Rs 70 crore investment and the intention of starting out with 70 per cent localisation.

The plans are moving forward and we have confirmation that UM Motors will launch two motorcycles at the 2016 Auto Expo in Delhi. The company has already appointed 50 dealers across India and the distribution network will continue to expand taking in tier 2 and tier 3 cities and towns going forward. UM-Lohia is expected to open bookings at the Auto Expo though actual vehicle deliveries will probably start only by June 2016. 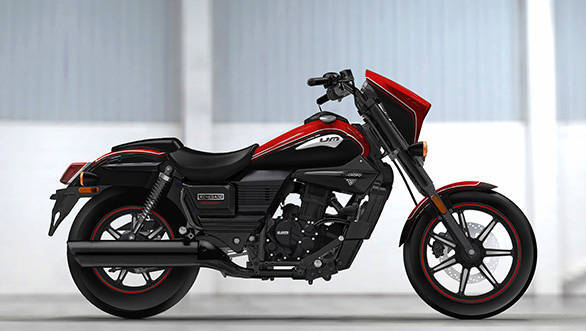 At the EICMA Show in Milan, UM told OVERDRIVE that among the Indian line-up would be this motorcycle, the Renegade Sport S. The motorcycle was clearly a prototype at the Milan show, but it already wore TVS-branded tyres, a 110-section on the 17-inch front rim and a 140-section on the rear 15-inch rim. The spec was a 279cc single cylinder engine boasting both liquid cooling and fuel injection mated to a 6-speed transmission. The engine, according to the specifications revealed at the show, produces 26.6PS of peak power at 8,600rpm and 22.8Nm of torque at 6,300rpm. The front disc - no ABS on the prototype - was from Endurance and the forks were made in India by Gabriel. The Renegade Sport S will be joined by another model at the Auto Expo for which - as OVERDRIVE reported back in November 2015 - pre-bookings will open.

UM makes a range of motorcycles including street bikes, dual sports, step-throughs, scooters and cruisers. The Renegade name is UM's designation for cruisers. The engine range starts from 125cc and goes up to the 223cc engine. The new Renegade 279cc engine is going to be the biggest engine in the UM range.