Audi has just taken the wraps off the e-tron FE05 electric racecar, which will compete in the upcoming ABB FIA Formula E Championship 2018-19 season. The new season kicks off on December 15 at Ad Diriyah, Saudi Arabia. The new Formula E racecars feature a much better range than the ones used so far. Hence, each driver will compete with only one racecar in a race for the first time. The new Audi e-tron FE05 is the racecar in which Daniel Abt and Lucas di Grassi will make a bid for the championship. 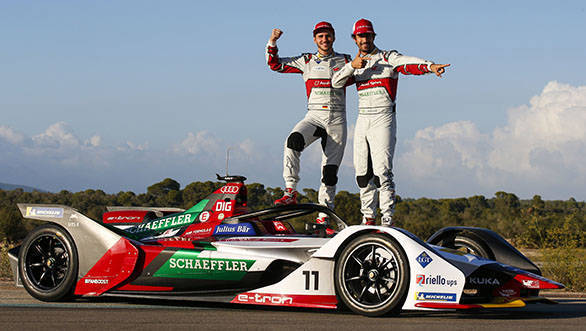 For the first time since the Formula E series was launched in 2014, drivers will only use one car per race to tackle the new season. Since the batteries now have the capacity to last the entire 45-minute race distance, the mandatory car change during the race has been eliminated. This is a testimony to how motorsport  especially Formula E  is advancing innovations and technology, Audi states.

With the e-tron FE05, Audi has worked on the drivetrain consisting of the motor, inverter, gearbox, components of the rear suspension, as well as the corresponding software. While the rest of the car is identical for all teams, manufacturers get the opportunity to showcase their technical expertise with the drivetrain. In the fourth season of the all-electric race series, which concluded with the facotry Audi Sport ABT Schaeffler winning the teams' title in New York mid-July, the Audi e-tron FE04 very often proved to be the most efficient car. Its successor is an evolution of this winning model, said the company.

The motor generator unit, dubbed the Audi Schaeffler MGU03, was jointly developed by Audi and its technology partner Schaeffler. Engineers put particular emphasis on making the package even more efficient and further increasing its level of effectiveness. 95 percent of the drivetrain parts are new and the engineers were able to shave ten percent off the weight.

Development of the e-tron FE05 began in mid-2017, and FIA homologation was completed at the end of July 2018. Audi will conduct a joint test with all the competitors mid-October in Valencia, Spain. Subsequently, the race cars and equipment will be transported to Saudi Arabia.

For the fifth season of Formula E, the motor is permitted to produce up to 250 kW (345PS) in qualifying. In the race, the output is capped at 200 kW (276PS). In the upcoming season, there will activation zones during each race. When drivers pass through this zone on the racetrack, they can briefly access a higher power mode of 225 kW (310PS). The FanBoost feature, which gives drivers a temporary power boost of up to 250 kW (345PS), based on fan votes.

Speaking about the FE05, Abt said, "When I head out onto the racetrack with the other cars, I feel like I'm in a science fiction movie. Compared to its predecessor, the new model has a considerably more aggressive design."

Thirteen races in 12 major cities are planned for the fifth season of the electric race series. Between the opening round in Ad Diriyah and the double-header finale in New York in mid-July 2019, races will be held in Marrakesh (Morocco), Mexico City (Mexico), Hong Kong (China), Rome (Italy), Paris (France), Monaco and Berlin (Germany). Each race is run over 45 minutes plus one lap, with most of the races held on temporary street circuits in city centers.

One for the books: Hero MotoSports’ Dakar...
Advertisement