Aston Martin has announced that the Pebble Beach Concours d'Elegance 2013 will be witness to the world debut of the 2014 Aston Martin Vanquish Volante. Alongside the Volante, will be Aston's brand new 2015 V12 Vantage S and the CC100 Speedster Concept. This will therefore mark the first US appearances of the CC100 Speedster and the V12 Vantage S. The CC100 is the realisation of Aston Martin's centenary celebration. The Pebble Beach Automotive Week, to be held in California from 14-18 August, is globally renowned and synonymous as a spectacle of luxury cars. 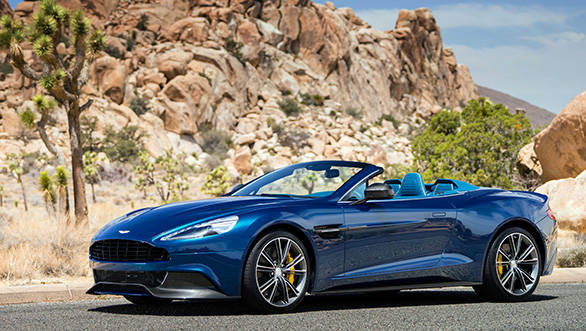 "The Pebble Beach week is now well established as a global celebration of the automobile and we are delighted to be a featured marque for 2013, celebrating our first 100 years, while also looking forward to the future. Along with our partners, we look forward to welcoming current owners, new customers and automotive enthusiasts to share in our celebratory events at The Aston Martin Estate throughout the weekend," said Julian Jenkins, Regional Director  Americas, Aston Martin.

The Aston Martin Vanquish Volante uses Aston's fourth-generation VH platform. It is powered by a 6.0-litre V12 engine that delivers an imposing 565Bhp. Peak torque is 620Nm at around 6,750rpm. Power is sent to the rear wheels thanks to the Touchtronic 2 six-speed automatic transmission. The potency of this car is further accentuated owing to an almost perfect weight distribution of 51:49.