ARRC 2019: Rajiv Sethu scores points at Round 3 in Buriram

The third round of the 2019 Asia Road Racing Championship, at Buriram, Thailand, was a mixed bag for the Idemitsu Honda Racing India team. However, the weekend ended on a high note, with Rajiv Sethu scoring points in Race 2. 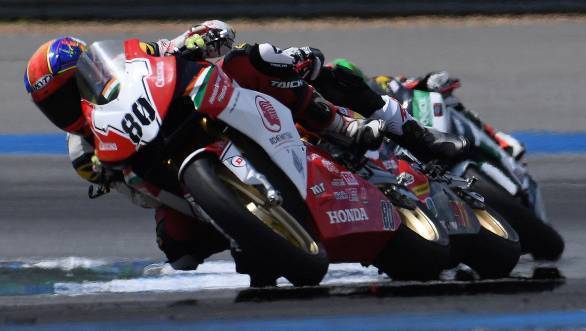 Rajiv Sethu of Idemitsu Honda Racing Team India on his way to a points-scoring finish at Buriram, Thailand

The weekend got off to a decent start, with Sethu managing to take seventh position on the grid during qualifying. He set a time of 1min 53.573sec. However a bad start to the race meant that he was forced down the order in the early stages, and found himself down in 21st position. Sethu was determined not to end the race in that position, and managed to fight his way back through the order, overtaking several riders and managing to move up to tenth overall. However, on the last lap of the race, a high-side meant that he lost control of his CBR250RR. Sethu was able to remount, and finished the race in 22nd position.

His teammate, Senthil Kumar managed to finish the race in 18th position, after having spent a large portion of the race in 20th. 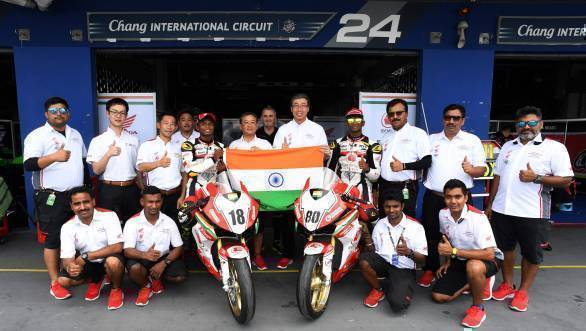 Things were better for Sethu in the second race, where he finished 12th overall. In the early stages of the race, he managed to compete with riders in the top five, and then, despite falling back, diced with some of the riders in the top ten. He unfortunately wasn't able to finish in the top 10 though, eventually ending 12th overall, and claiming points.

His teammate Senthil Kumar finished 20th in the second race.

Sethu now has 22 points in the championship, which means he is currently ranked 14th overall. The Idemitsu Honda Racing India team also has 22 points, and is ranked seventh in the team championship standings.

The ARRC will now head to Suzuka, where Sethu hopes to perform better than in the past. He is counting on using knowledge gained during the Suzuka 4 Hour Endurance race that he will take part in, in this coming weekend, ahead of the ARRC round at the end of June.