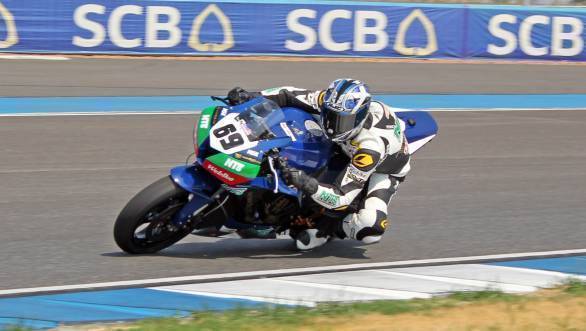 While Sarath Kumar had to sit out of the second round of the Asia Road Racing Championship at the Buriram Circuit in Thailand due to a knee injury, he is now set to finally make his debut in the 600cc category of the event at Suzuka. Sarath will ride a Honda CBR600WR for Team T.Pro Yuzy Honda NTS Racing this weekend.

"I have been attending physiotherapy sessions with Dr. Kannan Pugazhalenthi from SPARRC in Chennai and so far, the recovery has been fast, though my leg does get cramped when stressed. However, I do a few exercises and stretches that relieve the stress," said Sarath who had picked up the injury during pre-season training.

Sarath, who has graduated to the 600cc class this year, is hoping that he will make progress at Suzuka, especially since he already realised in the few sessions that he did manage to ride in at Buriram, that he was comfortable with the bike.

"During the practice sessions in Buriram, I felt very comfortable with the bike especially with the power delivery. My Moto3 experience helped me understand the speed, data, and the slick tyres. The Honda CBR600WR is a comfortable bike to ride and the team has given me a great setup, so someone for the first time can understand the bike," said Sarath.

The plus point about racing in the SuperSport 600 class is that since it is one of the toughest grids in the world, Sarath will be able to race against some of the best riders around and hone his skills.

Of racing in Suzuka itself, Sarath had this to say. "Suzuka is a fast circuit and has many high speed corners which I like. There are also a lot of technical turns where I need to work on my riding the big bike around. Now that my knee feels better I am confident that I will ride all the sessions during the weekend."

Meanwhile, Ramji Govindarajan, Managing Director, Ten10 Racing, said that there was no pressure on Sarath, and that the team was focussing on collecting precision data on his transition from the 250s to the 600cc class.

"We got good data from the three sessions that he rode in Buriram and now we know where he needs to improve and what kind of rider he is. So now we will continue to work on that in Round 3 at Suzuka which is a very fast, challenging and physically demanding circuit. We will get more data of Sarath from here and expect him to start the race and make his debut."