It's been a month since Sarath Kumar found himself unable to ride in the second race of Round 3 of the Asia Road Racing Championship's Super Sport 600 class at Japan. The injuries that he'd sustained in pre-season testing and the subsequent surgeries had meant Sarath wasn't able to compete in the season opener in Malaysia, had to sit out the round at Buriram in Thailand after he was declared unfit to race, and just about managed to ride in one race at Japan. But this weekend, as the championship heads to Sentul, Indonesia for Round 4, Kumar is hoping to do better astride his Honda CBR600WR that he races for Team T. Pro Yuzy Honda NTS Racing. 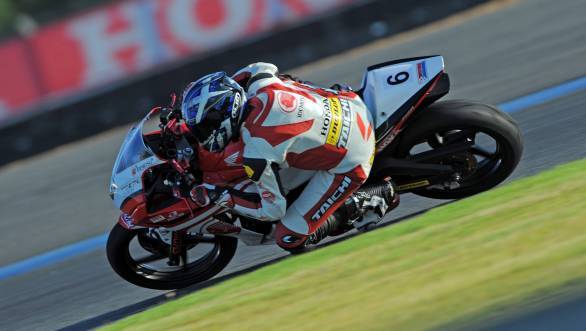 The time off between the races has helped the Ten10 Racing rider sort out all the niggling health issues that had plagued him. Sarath has worked on physiotherapy to make sure his knee is able to take the stress and strain of a full race weekend, and he's also managed to work on his fitness levels, necessary if he plans to be competitive.

"I have been working hard to get back into shape for the ARRC Super Sport 600 races in Sentul. The recovery process of my knee is even more painful than expected. However, with the help of my team and physiotherapy sessions with Quantum Leap's Ramji Srinivasan, the knee has shown great improvement," said Sarath.

"Although I was not able to ride frequently as advised, I feel much better compared to the Thailand and Japan rounds and I am going into this weekend with great confidence. I hope to improve my performance this round," he continued.

Sarath also said that his aim for the weekend is to participate and complete both the races, which he couldn't do at Suzuka because of the weather conditions and his knee injury. The Indian rider also said that given that the SS600 grid is as competitive as it is, every single race involves a steep learning curve.

Well, we hope Sarath manages to do well at Sentul. Watch this space for updates!