So much excitement, so much wow! I was so so excited to go ride the Aprilia SR 150 at the launch event in Coimbatore but as you know now, Rishaad Mody got to go ride the new Aprilia SR150. We had been excited about the SR since it was revealed at the 2016 Auto Expo, but to not get to ride the Aprilia SR 150? Aargh. To make it worse, Mody came back raving and that did not help at all. The word 'finally'  which Indian enthusiasts use a lot apart from sighing liberally  was used a lot in the context of the scooter market.

In any case, as I've maintained for a while, the homogeneity of the products in the scooter market in India is bewildering. How can 31 per cent of the entire market demand nothing but the same scooter endlessly? We believe the scooter market will evolve in product terms and the Aprilia SR150 is the first proper enthusiasts' scooter. 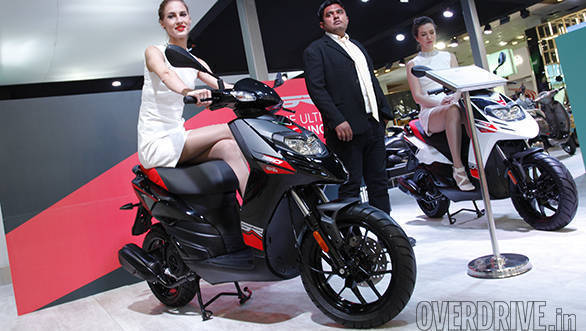 But all that is behind us now. I've just spend the whole day wandering around Mumbai on a claggy, muggy, rainy day and after 75km of SR-ing about here are five things I liked about the new Aprilia and three things I didn't. Since I won't be discussing the specs  see Mody's story for the details  let me just get the basics out of the way.

The Aprilia is powered by a 154.4cc, air-cooled, carbureted single-cylinder engine that develops 11.6PS and 11.5Nm. This is shared with the Vespa 150, but Piaggio says gearing has been changed to suit the role of the scooter. At 122kg, the Aprilia is no featherweight but it does get a delicious chassis spec. The headliners are the gorgeous 14-inch wheels and then there's the disc up front. The price is Rs 65,000 ex-showroom, Mumbai. The on-road price is Rs 80,000. Meanwhile, the Honda Activa 3G is priced at Rs 61,551 and the Vespa 150 at Rs 97,201, on-road.  Why are we comparing the SR to the Activa and the V150? We are not. We are just setting a frame so you can grasp the pricing. 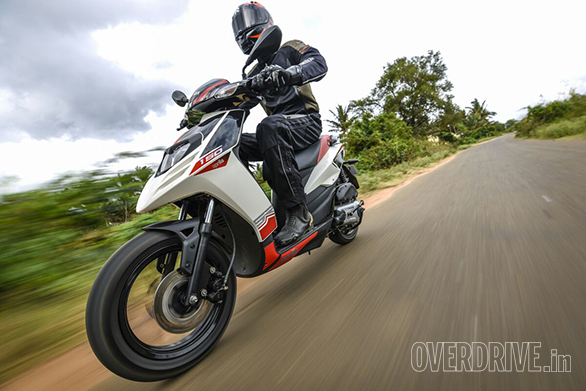 I've always liked motorcycles and scooters that feel like a densely packed unit. There's a sense of together-ness to them that makes me feel mushy inside. The KTM 390 Duke  which I went in to buy  had it and the Aprilia SR150 has it in spades too. The plastics will rattle over the really bad bumps but it really does feel solid.

2. Holy cow! This is properly quick
It was easy to feel a bit disillusioned when Piaggio India said at the 2016 Auto Expo that the SR150 would employ the Vespa 150 engine with tuning mods. Well, get over it!
There's a fair amount of vibration in the bars at idle. This is unexpected because all of the Indian scooters seem to have engines made of butter, oil and two yards of fine silk. But I've come to enjoy this little vibration. It sort of underlines the fact that the Aprilia SR150 isn't your average Activa-aping dullard.

And when you nail the gas open, it rockets forward! With just 11PS, it's no missile to be sure. But compared to the other Indian scooters, the SR is fast enough to be properly thrilling. I'm so impressed! Even better is the mid-range. To give you an example, 40kmph is buttery smooth in traffic. The engines quiet and the handlebar feels completely vibration-free. Nail the gas at this point and the acceleration is purposeful and effective.

One of the reasons for this is the transmission. I'm not sure how but the Aprilia's automatic seems to have a far more defined friction point than the usually soft and elastic feeling that's the norm. It gives you the sensation of power delivery that's vastly crisper and not unlike a good manually operated clutch in its quickness. Me likey!

3. Where did that bump go?
The ride quality is very interesting. The scooters feels firmly damped and well-sprung when you sit. Over undulations and smaller sharp bumps, it feels not unlike the KTM Duke - there a fair amount of feedback. But if you speed up, the SR appears to find a lot more absorption. It'll swallow some pretty big hits and feel surprisingly absorbent.
Plush it is not. Not by any stretch of the imagination. But for the performance and the handling, this is a sporty ride I'll happily live with.

4. Cornering like a scooter shouldn't!
The Aprilia seats you tall and those 14-inch wheels do make you feel like you're on a motorcycle with smaller wheels. There's some of the slightly top-heavy feel of a small-wheeled scooter that you eventually get used to. 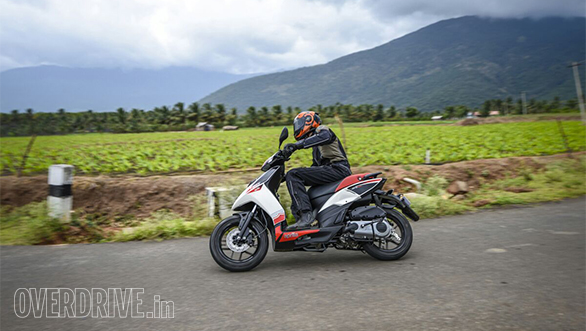 The wheels are the magic. Bigger wheels generate more gyroscopic precession and that translates directly into stability. A generous turning radius means you can still flick-flack like a scooter should and make 90° turns at the drop of a hat. But it's super, super stable and trustworthy.

Fast corners feel terrific but there is an acclimatisation period. The Vee Rubber tyres have a rounder profile than you expect, and initially they make the scooter feel like it's falling into the corner a bit quicker than you planned for. So that's the second thing it has in common with the KTMs then.

Once you get used to it, the fun really begins. This is a proper, proper cornering machine, and scraping things is going to take a bit of work. The Vee tyres offer a lot of grip but if I were to buy one (hmm... there's an idea) I'd wear out the first set and set about sourcing even stickier, notably sportier tyres from Michelin or Pirelli. In short, the SR isn't just a sporty looking scooter. It very much is a sporty scooter. The only one of its kind at this time.

5. Look no further!
I don't like being noticed in traffic. But I did notice how many lustful - yes lustful - glances the Aprilia gets. It's the combination of its unabashedly modern design as well as the Aprilia-bright paint scheme. 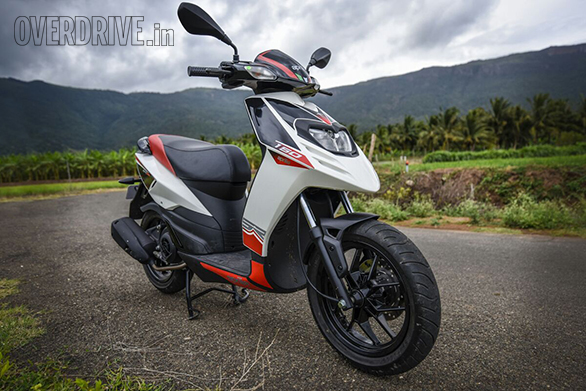 All the youngsters and many more, er, mature people gawped openly at the SR150. The former knew what there were looking at, and you'd see raised eyebrows and slackened jaw mouthing, "Oh dude, that's the Aprilia scooter" while the older guys would form the word Aprilia for the very first time with a raised eyebrow.

But it isn't perfect. Here is the stuff that I didn't like about the Aprilia SR150.

1. That seat is a pain in the arse
Well, not immediately. If you're going to use the Aprilia to commute  and most of you will  then there's no crisis. It's a firm seat  and I would always prefer firm over soft  and while you sit tall, getting the feet down will not be a problem for most riders. 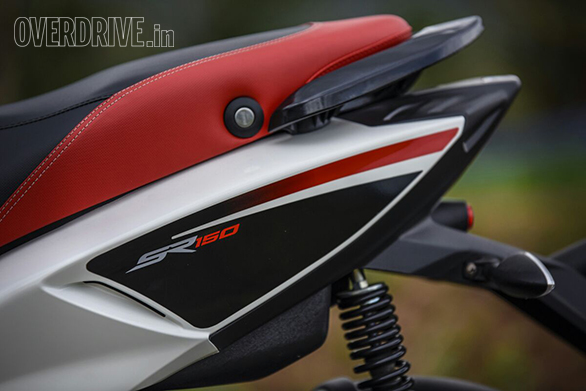 However, if you're riding longer distances, say hour long commutes, the slope of the seat constantly pushes you towards the bars which is a bit annoying. Then about an hour in, it'll also make your arse a bit numb which sucks.

2. It's really a foot board
The Aprilia has the least spacious footboard of any scooter I've ever tested. The little extended recess at the front is a great idea that does help. However, there is space only for the feet. When I added a 22-litre backpack to the mix, my feet were half outside. This is my default position any way, so I didn't feel hassled but space is definitely at a premium. The footboard is small and it's hard to fit a bag in there behind your feet. Luggage will have to be stowed in the underseat compartment or on strapped to the back seat. Easily forgivable in a scooter as sporty as this

Under seat storage is reasonable, but using it reminds me of the one small useability improvement that Piaggio would do well to implement across all its scooters. The Aprilia seat is unlocked by key as usual, but it doesn't pop unlock and stay like that. It stays unlocked as long as the key is turned. This makes opening the seat when you have one hand occupied needlessly complex. Eventually, you learn to use the key itself as a handle but it doesn't feel right. 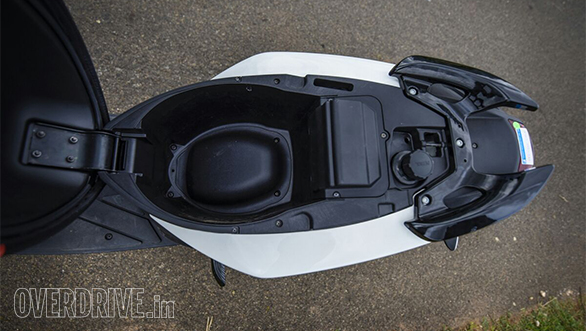 Underseat space is decent but the seat will not close over a premium full-face lid. The fuel tank nozzle is quite narrow, and petrol tends to splash back as the attendant cannot see how much is filled

Final underseat niggle? The fuel filler nozzle is remarkably narrow and fits the fuel pump's tube exactly. So every time we went to a pump with the auto-cut no functioning, there was petrol splashing back because the attendant never could see how far he had filled up.

So. Wow. What a brilliant little scooter the Aprilia SR 150 turns out to be! The combination of its feel, performance and dynamic ability is very addictive. As an enthusiast, one wishes it had more power  that demand never gets old, right  but it certainly is the sportiest, most exciting scooter in India money can buy right now.

But before you run out and make a booking, you should realise something. The Aprilia SR 150 isn't a scooter for everyone in the way say, a TVS Scooty Zest or Suzuki Access is. Let me explain this.

The SR 150 is more practical than a motorcycle, but it isn't as utility-oriented as the sort of scooter we have gotten used to. In that sense, it feels more focussed on being fun and sprightly and that might not be to everyone's taste. The same focus though is what makes the SR 150 so much fun to ride. The Honda Navi showed that a staid, stoic platform like the Activa could be evolved into a bike that's hilarious and fun to ride. The Aprilia slots in at the other end. The engine could have had more punch, but this one was meant to be fun from the very start. And that creates so much excitement, so much wow! 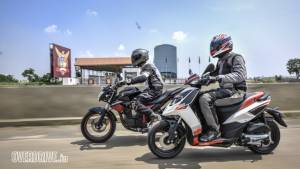 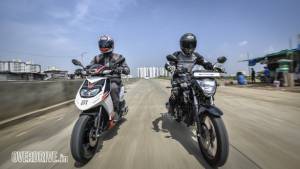 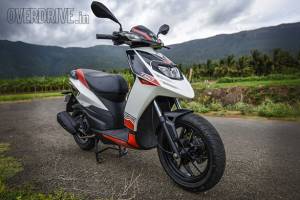