Mathematically Pontus Tidemand became the 2015 FIA Asia Pacific champion at half distance, meaning that Skoda drivers have now won the FIA Asia Pacific championship for the fourth successive year. Following on Chris Atkinson in 2012, then Gaurav Gill and Jan Kopecky, the MRF team has now provided the title for Pontus Tidemand with one event still to run. Once again Subaru driver Sanjay Takale entered but did not appear on account of a lingering bout of Malaria, but this time there was a surprise entry by the Chinese Soueast Mitsubishi team for the 2006 Junior World Rally Champion Patrick Sandell, making his first rally appearance for a year, after a season of rallycrossing in America. 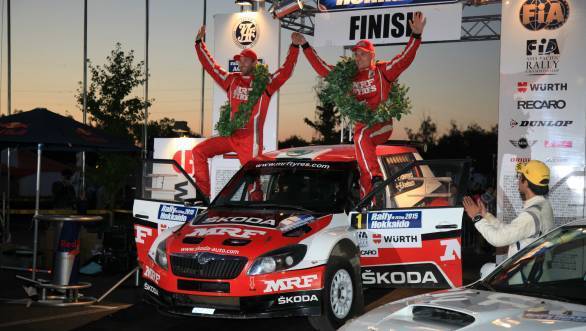 Tidemand and Axellson celebrate sealing the 2015 APRC title at Hokkaido

Wet conditions in Hokkaido did not prevent an anticipated battle between the two Skoda Fabia S2000 cars of Tidemand and his teammate Gaurav Gill but this was not to be. After successfully finishing second on the short superspecial on the Friday evening, Gill however stopped on the road section to the first Saturday stage with driveshaft and other problems and retired. Tidemand was now on his own, scoring fastest time on every special stage but two. The promised challenge from Sandell disastrously did not materialise.. He was late at the start control, and his team carrying the necessary equipment got lost on their way to the first refuelling point. He continued but then stopped with suspension trouble. 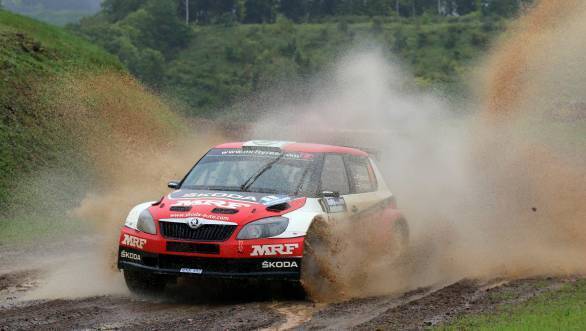 Sandell restarted on Day 2 and ended the event by making fastest time on the final superspecial. Mike Young settled into a distant second place in his Cusco team Subaru. He had incurred time control penalties when the car suddenly stopped through an electrical problem on a road section. This meant he was running a long way down the field but in fact gave him the chance to make fastest time on stage 9 on the evening of Day 1. The top cars had to run this stage in torrental rain, while Young had much clearer conditions. In these conditions Sandell's team leader Fan Fan stopped when he ran out of fuel.

The second day saw much kinder weather conditions. Sandell restarted and was able to offer some competition to Tidemand. Young used the afternoon to try out some special Advan tyres which were likely to be useful for the mainly concrete surfaced stages on the final championship round in China. He eventually finished over 12 minutes behind the winner. In the supporting AllJapan national championship rally Fumio Nutahara (Mitsubishi) finished nearly 1m 30s ahead of Toshi Arai (Subaru). Skoda's line-up plans for the final round APRC championship, the China Rally at Longyou, have yet to be defined but the plan is that at least one of the MRF Skodas will be a Fabia R5.