The International Rally of Queensland is the third round of the 2014 Asia-Pacific Rally Championship and will see Team MRF Skoda drivers Gaurav Gill and Jan Kopecky slug it out for victory. The team-mates have won one round each of the 2014 APRC (with Gill winning at New Zealand and Kopecky at New Caledonia) and are currently tied for points at the head of the championship standings. Victory at the Rally of Queensland will see one of them move into the head of the championship standings. 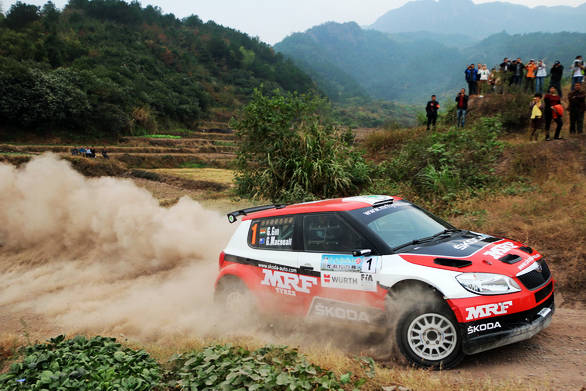 And while there might be team orders in other forms of motorsport, Team MRF Skoda boss Lane Heenan has declared that his drivers are free to compete against each other. The one advantage that reigning champion Gill has is that he has competed in the APRC Rally of Queensland on several occasions. This, however, will be the first time that European Rally Champion Jan Kopecky will be competing in the event. Nonetheless, dealing with new surfaces in rallies doesn't really seem to affect Kopecky very much, as was in evidence when he managed to win Round 2 of the championship at New Caledonia.
What the team really does need to be careful about, however, is that Kopecky and Gill will have to contend with rain on the stages. "The joke that's doing the rounds is that the APRC has turned into a wet weather championship," said Gill. "We're gearing up for some wet stages and changing conditions over the course of the rally," Gill continued. The drivers are likely to push to the very limit on the low grip conditions.
Thirteen cars have been registered for the third round of APRC and the roster includes some serious talent ranging from Mark Pedder, Scott Pedder to Tom Wilde and Brendan Reeves.
Given that Gill has just won the opening round of the Indian Rally Championship, Rally of Maharashtra, he will be looking to score an APRC win too. Watch this space for updates.