Alpina to launch the B4 bi-turbo at Goodwood 2014

Alpina will launch the B4 bi-turbo petrol in UK at the Goodwood Festival of Speed. This engine will be available in the Coupe or Convertible guise. For those of you who don't know about Alpina, it an automobile manufacturing company (instead of tuning division like M) and they work closely with BMW and the cars are produced in BMW's assembly line itself. They had recently launched the D3 bi-turbo straight six diesel in the UK, which Alpina claims is the world's fastest diesel production car.

Alpinas are known for their effortless performance and this one wouldn't be much different. The 3.0-litre straight-six engine makes 416PS of power and 600Nm of torque. These numbers mean that the cars reach 100kph in 4.2 seconds. Even the new M4/M3 do the same run in 4.1 seconds. The changes include reduction of pressure losses, 61 per cent  larger intercooler and an additional radiator. It also features a exhaust system developed in conjunction with Akrapovic. The changes haven't been limited to the engine only. The car features Adaptive M sport suspension, Alpina springs with 40 per cent faster rate work and dampers which have been set for a softer compression and a stiffer rebound. The car even has braking system with Brembo callipers and 370mm discs in the front and 345mm in the rear. Alpina has always found a nice balance between ride and handling and this shouldn't be any different.

On the inside the B4 gets Lavalina leather upholstery, electrically adjustable and heated seats and climate control as standard. It also gets 'luxury carpet overmats. The steering wheel also gets the Lavalina leather and the instruments are in Alpina blue. 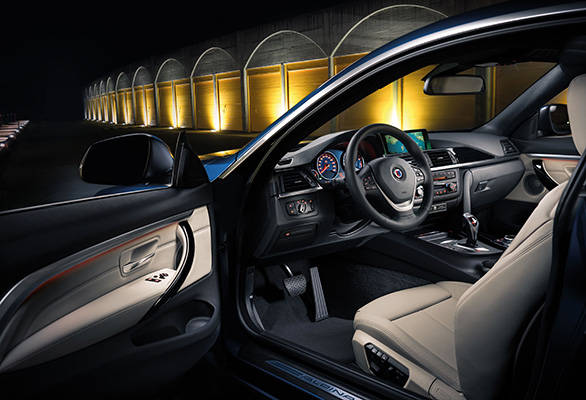 So far so good. The Alpina comes at a price tag of Rs 60.07 lakh for the Coupe and Rs 64.15 lakh for the convertible in UK. In comparison, the standard M3 costs Rs 57.25 lakh while the M4 costs Rs 57.71 lakh. Sure adding the optional automatic gearbox to the M would mean that both of them cost almost the same. Now, that is a tough choice to make. The Alpina is for a mature buyer who prefers a better ride and luxury over snappy gearshifts and an over-eager engine. Were it pitted against the older M3, the choice between the two extremes would have been much simpler, now though, it depends whether you like an Alpina or a BMW M logo on the bootlid.

Alpina B4 bi-turbo to debut at Goodwood 2014 press release

ALPINA is following the launch of the remarkable D3 Bi-Turbo, the world's fastest diesel production car, with two new petrol models. The new B4 Bi-Turbo is available as a coupe or a convertible, together offering a unique combination of comfort, refinement and very high performance. With more than 300 kW (410 hp) and 600 Nm of torque, the Coupe touches 100 km/h(62 mph) from zero in just 4.2 seconds (4.5 for the Convertible). Four Wheel Drive versions, available in left hand drive markets only, will reach 100 km/h (62 mph) in an astonishing 4.0 seconds. ALPINA's careful optimisation of the powertrain and aerodynamics allows this remarkable performance to be delivered with combined cycle fuel economy of 37 mpg and CO2 emissions of just 177 g/km.

The B4 Bi-Turbo will be launched in the UK at the Goodwood Festival of Speed (June 27  29), where visitors will also be able to see the XD3 luxury compact SUV and the astonishing 700 Nm D3-Bi-Turbo, which combines 278 km/h (172 mph) and 0-100km/h (0-62 mph) in 4.6 seconds with CO2 emissions of ALPINA GB sales manager Matthew Stripling says the cars are designed for people who appreciate refinement and comfort as much as very high performance. "ALPINA customers value the finely- honed feel of a bespoke car and the easily accessible performance that comes with substantial torque available at almost any engine speed," he explains. "We are not trying to compete with cars that must also perform well on a track. An ALPINA is often described as 'the best performance car for the real world' and that's something we are very proud of."

Based on BMW's latest generation 3-Series, the B4 Bi-Turbo is the result of a two year development programme during which every aspect of the vehicle was analysed and refined to increase performance, comfort, efficiency and style. Using design and validation processes identical to those implemented by BMW, ALPINA's team of 50 development engineers worked with specialist suppliers to enhance the engine, gearbox, cooling system, body structure, wheels, tyres, aerodynamics, steering, suspension and At the heart of the new B4 Bi-Turbo is an extensively re-engineered version of BMW's highly-regarded 3.0 litre straight six from the 335i. That engine's twin-scroll single turbocharger is replaced by a twin-turbo system to provide very fast throttle response and the many bespoke components include a sophisticated cooling system and a new, forged steel crankshaft. "ALPINAs must be capable of high-performance motoring every day without any compromise in durability," emphasises Stripling.

The BMW ALPINA B4 Bi-Turbo is available in the UK as a Coupe for £58,950 or as a Convertible for £62,950, with a long list of standard equipment that includes an eight-speed automatic gearbox, Adaptive M Sport Suspension, leather upholstery, electrically adjustable heated sports seats, climate control and Bi-Xenon headlights. Inside, there are luxury carpet overmats and subtle ALPINA logos on the seat backs and door sills. The instruments are in ALPINA Blue and the steering wheel is covered in finest-quality, hand-stitched Lavalina leather. The acoustically insulated metal roof of the Convertible can be closed in just 20 seconds at up to 18 km/h (11 mph).

Outside, the new B4 Bi-Turbo receives subtle aerodynamic enhancements developed in BMW's wind tunnel, a four outlet exhaust with an 'intelligent' acoustic valve, and 20" ALPINA alloy wheels in the company's famous Classic design. Every car is finished with a model plaque displayed on the centre console, showing the car's unique build number.

In addition to being available with all BMW options including those from BMW Individual, the B4 Bi-Turbo can receive almost limitless personalisation from ALPINA's craftsmen. Alongside the famous ALPINA Blue and ALPINA Green signature paintwork, choices include hand-stitched full leather interiors of superb quality and a wide range of hand-finished woods for the dashboard and doors.

ALPINA has worked closely with BMW since 1961, with shared warranty cover since 1964. The company was registered as an automobile manufacturer in 1983. ALPINAs can be serviced at any BMW centre