Royal Enfield has been working on a new 350cc model which will replace the current Thunderbird 350. Recently, few images have surfaced of the bike and it gives quite some information about the new bike that is bound to make its way to the country in the near future. 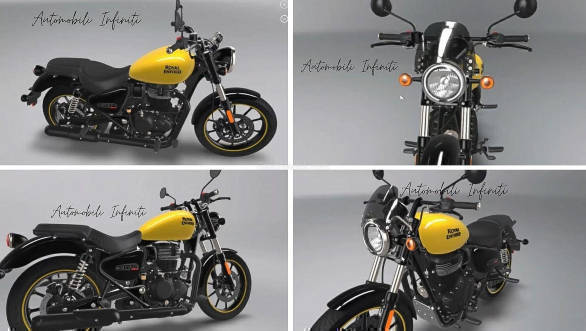 The images are from an online bike configurator and it states the price of the bike to be around Rs 1.68 lakhs which is close to the price of the Thunderbird 350  Rs 1.56 lakh ex-showroom. It also gives away the new 'Fireball' suffix, the full name of the bike could be Royal Enfield Meteor 350 Fireball.

Looks
The bike gets round halogen headlamp setup covered by LED DRls with circular indicators and tail lamp. It also gets a tinted fly screen on the top of the headlamp, but that is an accessory and would cost more. Other accessories include panniers, footpegs and seat options. The instrument cluster is an asymmetrical twin-pod setup and the bike rides on 17-inch alloy wheels that get a colour-coordinated pin-striping treatment. The rear design has been revised along with the tank and side panels. The fuel cap on the tank is placed at the centre, the rear fender is shorter than the Thunderbird. It will be available in two colours  Red and Yellow.

Frame
The bike is based on the company's new J-platform and it gets a new single-downtube frame. The Meteor will have more of a cruiser based rider triangle with the front footpegs positioned slightly further ahead than the Thunderbird. The disc brakes and calipers are located to the right and the chainset is located on the left, unlike the Thunderbird's layout. The bike gets conventional telescopic forks up front and twin shock absorbers at the rear. And dual-channel ABS will be standard. 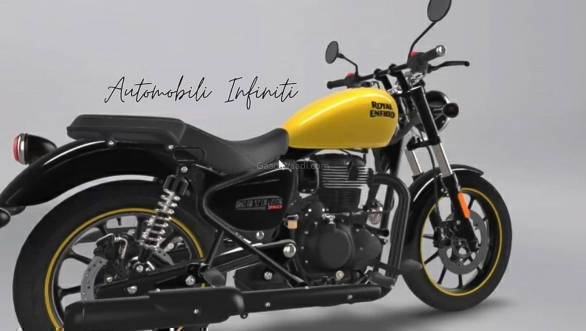 Engine
The engine specs are not revealed but the Meteor 350 will get a fuel-injected engine to meet the BSVI regulations, unlike the carburetted one that powers the Thunderbird. The 346cc single-cylinder, air-cooled engine on the Thunderbird pushed 20PS of maximum power and generated 28Nm of torque. 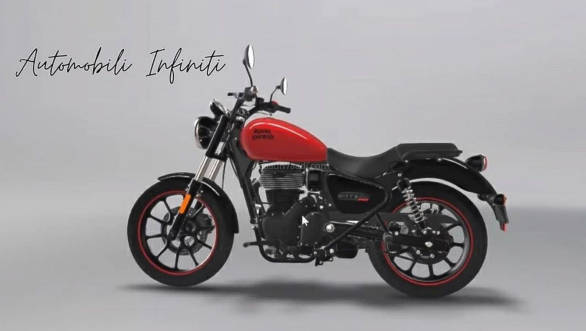 The upcoming Meteor 350 Fireblade could have power figures in the same ballpark and it will lock horns with Benelli Imperiale 400, Jawa Forty-Two and the Bajaj Dominar 250.