Audi will unveil the third and latest iteration of its compact sports car the Audi TT at next month's Geneva Motor Show. Till then, we will have to contend ourselves with the sketches that Audi has released. The new design seems to take cues from Audi's R8 and Volkswagen's Beetle models, and also seems inspired by the Audi Allroad Shooting Brake showcar exhibited at the Detroit Auto Show in January. Click to view the image gallery of the Audi Allroad Shooting Brake. Headlights have an option of LED or Audi's Matrix LED technologies

The exterior seems to be designed with a more aggressive look though the silhouette as seen in the first generation is retained. The front end is dominated by the trapezoidal grille with horizontal lines. The air intakes on the bumper are divided by struts and this division motif is seen on the headlamp and taillight assembly as well. The Audi four rings logo is now placed centrally at the bonnet, like in the R8. Headlights come with option of LED or Audi's Matrix LED technology.

The side view has bold, protruding wheel arches and a prominent shoulder line which starts from the headlights and moves all the way to the posterior. The C-pillar gets a slight pull which gives the side view an athletic and sporty look. All versions of the TT will feature two large, round exhaust pipes in the diffuser except for the S which gets 4

The struts in the tail light assembly remain permanently lit and the third brake light consisting of a flat strip shape acts as a link between the two units on either side. All version of the TT will feature two large, round exhaust pipes in the diffuser with the exception of TTS, which like other S models gets four tail pipes.

Interior have a minimalist style theme which gives it a clean and sporty feel. The top view of the dashboard resembles an aircraft wing. The round turbine look air vents have air-conditioning controls integrated in them and along with the removal of the central MMI monitor gives the dashboard a very slim fascia. The MMI monitor will make way for Audi's virtual cockpit system.

Audi will release more details on the TT at the unveiling at Geneva. 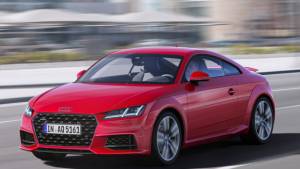 Audi TT to be replaced with an Electric... 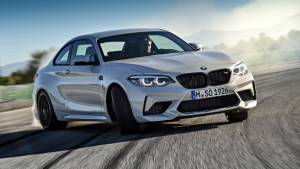