All-electric Bajaj Chetak: Everything that you should know

Bajaj Auto's Urbanite EV project has been in the news for quite some time now and the Pune-based manufacturer has showcased its first offering under the project, the Chetak. Now, the Chetak needs no introduction as one of the most recognised names in the Indian two-wheeler industry and pretty much the Indian automobile industry overall, for that matter. The Chetak was the scooter that brought mobility to the masses in a way  a simple two-stroke scooter, the Chetak was one of the only options in the 1980s for middle-class families. Its raging success for nearly two decades is something manufacturers can only dream of replicating in today's world  we're told the Chetak had waiting periods of up to 10 years! Also, images of families of three, four or more people on the scooter are all too familiar for most of us and it is safe to assume, most people who are over 30 years older today had a Chetak at home or have been ferried around in one in their childhood (like me!) or have probably ridden one too. 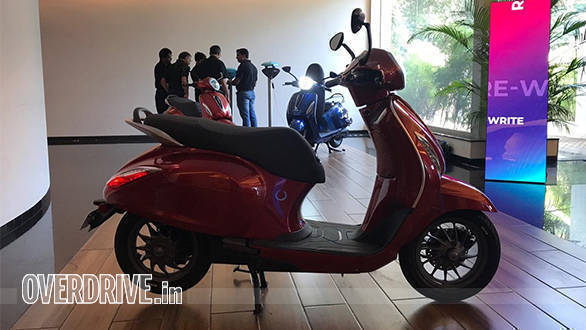 The scooter has adapted to modern styling cues, however, gets the same silhouette

Given such a rich history, it isn't surprising that Bajaj Auto is reviving the Chetak name for its first-ever electric scooter, the name is sure to ring a bell for generations of motorists in the country. In fact the new Chetak, slated for launch in January 2020, will be no less than a historic product for the marquee brand. It not only brings the iconic name back or marks its return to making scooters, but will also mark Bajaj Auto's foray into the burgeoning electric two-wheeler space. More importantly, Bajaj Auto will be the first from the list of established, large scale two-wheeler makers in India to launch an electric two-wheeler in the current EV revolution. TVS Motor sure sold the TVS Scooty Teenz Electric back in 2008, but lacklustre demand for an electric scooter back then had the manufacturer pull the plug on it. 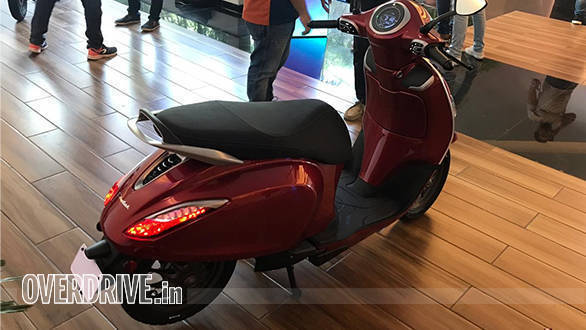 The panels get no aggressive styling elements, instead, sport a smooth bulge on either side of the engine cover that flows to the back of the scooter integrating the tail lamp

The scooter looks stunning given its retro design and is unlike any of the current scooters on sale in the country, electric scooters included. This gives the Chetak a very distinct appearance and it should also evoke a sense of nostalgia for many, especially given the design of the alloy wheels, the trailing link suspension at the front and monoshock at the rear. Of course, the curvy and flowing front apron and oval headlight (all-LED unit), the footboard design and the flared side panels remind of Italian scooters, particularly Vespas. An interesting bit on the Chetak is the 'soft-close' storage box on the inside of the front apron, again a throwback to older, geared scooters. Intriguingly, the Chetak does not have the Bajaj name or logo anywhere at all, as Rajiv Bajaj feels the Chetak has an identity of its own. Turn indicators at both ends are tall and at the rear, they also integrate the stop lights. 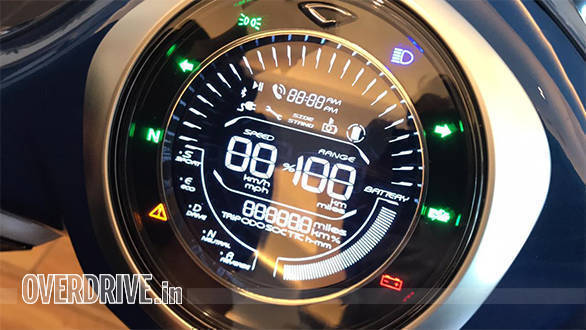 The instrument cluster is  expectedly  a digital display but a monochrome one. It includes the speedometer, range, odometer, battery charge status and also a display for the riding mode selected. As for the controls, Bajaj Auto has done away with conventional switches as we know them and the Chetak gets what Bajaj calls 'feather touch' activation and a 'swipe' function to actuate the turn indicators. Keyless start will be standard, another hint at the scooter's premium positioning. On the same note, we also expect the Chetak to come equipped with onboard internet connectivity as seen on new age electric scooters along with features like geofencing, location tagging and more via a dedicated smartphone app. Needless to say, the app should also offer information like charge status, range and more remotely. In keeping with its premium positioning, build quality of the Bajaj Chetak is expected to be top-notch, as Rajiv Bajaj is clear about targeting the educated, sophisticated, urban consumer. More importantly, the Chetak will be one of the only current-day scooters to use a metal body with a high-gloss paint finish to accentuate its premiumness. Moreover, if the fit-finish levels on the scooter displayed at the unveiling are anything to go by, we expect the Chetak to feel like a proper high-end product. 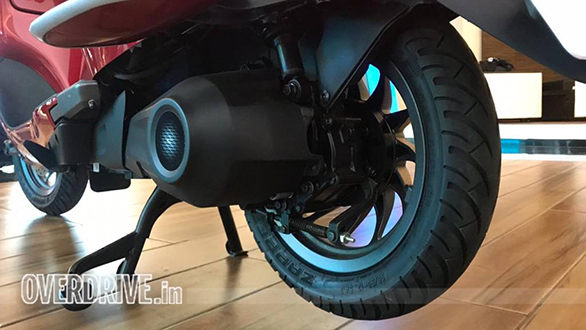 Bajaj Auto has not revealed the full technical specifications for the Chetak but for now, we do know that the scooter could use a 4kW electric motor that will source power from an IP67 rated battery (rating not disclosed yet). The battery will not be removable, unlike a lot of other electric scooters though. The Chetak will have two riding modes, Eco and Sport, and a reverse mode as well, a feature we have seen on the Ather 450, wherein you can engage what could be termed as a reverse gear. Range per charge, as indicated by Bajaj, stands at 95km in Eco mode and 85km in Sport. These might not sound very impressive as compared to the higher figures quoted by other electric scooter makers, but Bajaj claims these are real-world numbers and the ARAI certified range for the Chetak will be significantly higher. 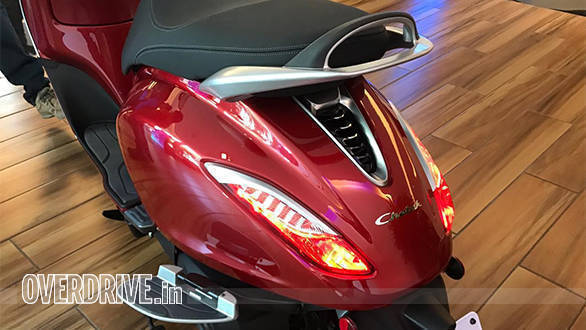 Bajaj has not equipped the Chetak with a fast-charging system as the manufacturer is confident that given the range, the scooter will not need the feature. Lack of a fast-charging system should also help Bajaj keep costs in check, apart from helping it keep things simple. The scooter can thus be charged via regular 5amp power sockets and will take about five hours for a full charge. Bajaj Auto also has plans to offer domestic charging stations at an additional cost, which will also offer information about the electricity consumed during each charge. Then there's the transmission. Normally, electric scooters have usually hub-mounted motors but the Chetak's motor is mounted on its swingarm and transmits power to the rear wheel via a transmission. The digital instrument cluster also has an 'N' or neutral on the display along with five other positions, indicating that the Chetak could use a unique 5-speed transmission which will change gears seamlessly. 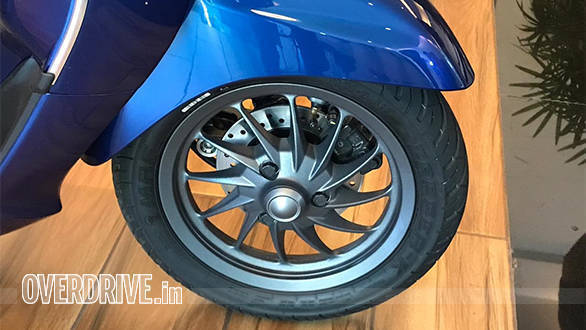 The multi-spoke alloy wheels get a matte finish

Moving on, the Chetak displayed has a disc brake at the front and a drum brake at the rear and we assume Bajaj's reasoning for the arrangement could be that the Chetak is not a high performance machine and hence will not require a disc brake at the rear, besides helping it save costs. That said, the Chetak is sure to get regenerative braking to help recharge its batteries on the go. The scooters runs on 12-inch wheels, a wheel size we have always believed is ideal for small capacity, general purpose scooters. The display model was shod with MRF Zapper tyres at both ends and we expect the production version to get the same too. 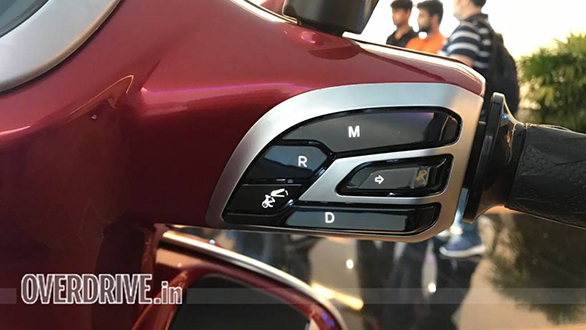 On the right switchgear, the scooter gets boot release and glovebox release switch

Importantly, Rajiv Bajaj mentions that the Chetak will be sold through Bajaj Auto's existing, extensive dealership network and that the company has no plans of setting up a separate chain for the Chetak, or EVs from its Urbanite sub-brand for that matter. Bajaj also tells us that the Chetak will be displayed at KTM dealerships in a bid to encourage walk-in enquiries, as he feels that a KTM buyer, given the pricing of KTM's motorcycles, is also a potential Chetak buyer. While Bajaj is tight-lipped about the price of the Chetak, he is clear that it will not be priced in the region of Rs 1.50 lakh as being speculated by many. Moreover, the Chetak will also be eligible for the FAME II subsidy. We thus expect the Chetak to retail at just over the Rs 1 lakh mark, which, given the scooter's attractive styling, the Bajaj name backing it, the build quality (going by the scooter displayed) as also the equipment levels does sound right. All said and done, the Chetak is sure to make all other two-wheeler biggies in the country sit up and take notice, be it with its positioning, equipment or simply the fact that a mainstream manufacturer of Bajaj Auto's repute and stature is taking the plunge into the EV space. In fact, the Chetak is a lot more than just a new product or a new electric scooter. And like the original Chetak did, decades ago, the new one looks set to stir up a revolution too.