Aditya Patel to compete in the 2014 International GT Open series

Going into the 2014 season of motorsport it was certain that Aditya Patel would be driving an Audi R8 LMS in a tintop racing series in Europe. The certainty was due to the fact that Patel is an Audi India-backed driver. However, what that series would be wasn't confirmed. Indeed, the MS Racing team that Patel competed with in the GT Masters class last year pulled out of the championship at the last minute. Now it has been confirmed that Aditya will be driving for Team Novadriver, partnering César Campaniço in the GT Pro Am class of the GT Open Championship. 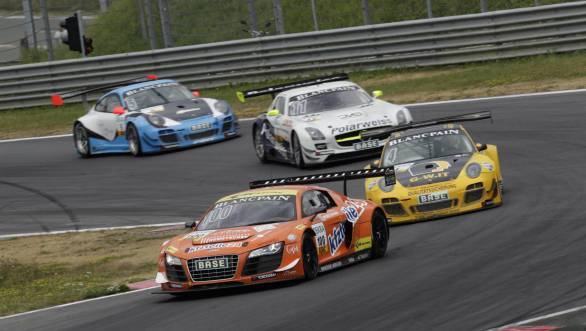 The International GT Open is a GT car racing series that is held at racetracks across Europe. Each round of the championship features two races. A qualifying session will be held before the 70 minute Race 1 on Saturday, and before the 60 minute Race 2 on Sunday too. The series also features two classes - Super GT and GT3. Super GT allows for cars to be tuned beyond just GT3 spec. Teams with two pro drivers also automatically find themselves competing in the Super GT class.

Patel is headed to the Nurburgring for the first round of the championship on May 3 and 4, where he will take to the track after seven long months of being out of a race car. But that isn't something that daunts him, especially given that the Nurburgring is a track that he has a good record at. "On one hand I have been out of the car for seven months, but on the other hand it is the Nurburgring. So I should be able to manage. It's better than heading to an all-new track," Patel says optimistically.

"It's great to be racing for Team Novadriver in the International GT Open series. The team is highly reputed and have many championships under their belt. The series as well, attracts some of the best GT and Formula car drivers from around the world. Being my second year racing GT cars, I am really looking forward to some good results and experience with the team," Patel said ahead of the opening round at the Nurburgring.